Brüno is a blast, but he's no Borat 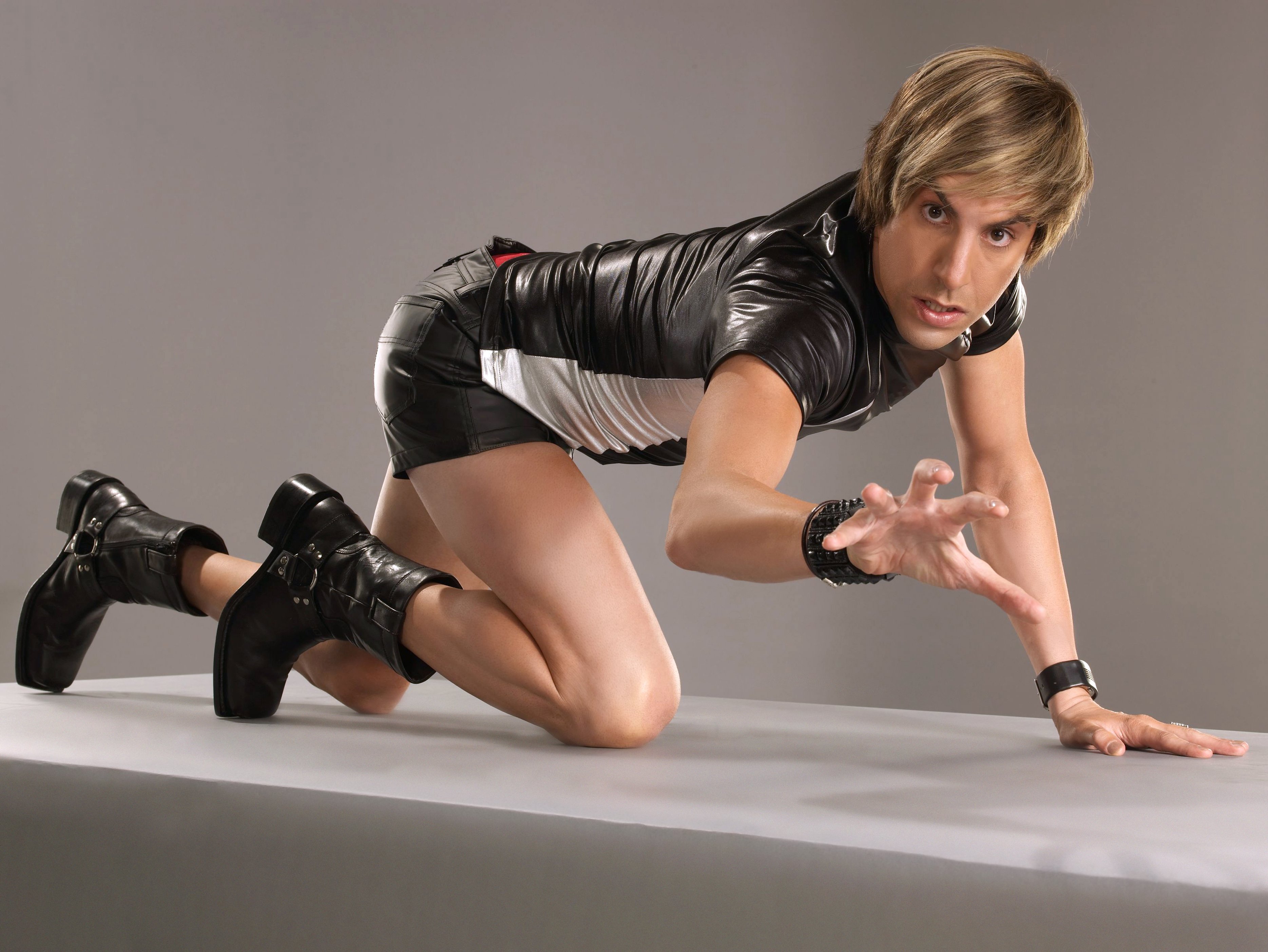 After all the trailers and media hype about Brüno, by the time I found a seat in a zoo-like screening of the film earlier this week, I felt I’d already seen it. Which could pose a problem for a movie that’s designed to ambush its audience as well as its subjects. But I was wrong. Brüno has no shortage of jaw-dropping gags that are far too lewd and crude for the mainstream media to spoil. And Sacha Baron Cohen still managed to shock me, pushing the satirical envelope of bad taste to the point that I had similar reaction to the one I had watching Borat for the first time—realizing that this movie goes further in breaking taboos than any picture ever released by a major Hollywood studio. And some of the gags are as funny as they are shocking, including a swinging, talking penis and more dildos than you can shake a stick at. After half a decade of taking boobs mainstream, it seems Hollywood is beginning to discover the penis, especially as a sight gag, and it may take another half century to wear it out. But by the end of Brüno, much of its novelty value has spent.

Of course, with the level of notoriety he’d gained through Borat, Cohen faced a much tougher challenge exposing his Brüno character to an unsuspecting public, especially given that his targets included the media-savvy denizens of the fashion world. Director Larry Charles and his crew had to operate in disguise and undercover, as they crashed fashion shows in Paris and Milan, outwitting security crews that were on the lookout for him—and in Milan he was arrested and strip-searched after barging onto a runway in a Velcro suit.

The movie’s premise, in case you haven’t heard, is that Brüno is host of the top-rated late-night fashion TV show in any German-speaking country, outside of Germany. When his show gets cancelled, he embarks on a trip to L.A., determined to become “the biggest Austrian superstar since Hitler,” and the “biggest gay movie star since Schwarzenegger.” To that extent, the story echoes Borat, as the fable of a shameless European bozo who embarks on an odyssey to America’s showbiz capital with stars in his eyes. And again the comedy is based on notion that the only people more naive and barbaric than the protagonist are the unwitting subjects who fall for his schtick and expose their own idiocy. A few samples (spoiler alert!):

As Brüno sets up his poolside interview suite in L.A., his first star is due to show up before the furniture has arrived. His solution is to have some Mexican labourers get down on their hands and knees and serve as chairs. His first guest, the gormless Paula Abdul, blithely takes a seat on one of the Mexicans, as if she sees nothing wrong with the scenario, before Brüno’s interview style finally spooks her and she walks out in a huff. As he excoriates Hollywood hypocrisy, one of Baron Cohen’s main targets is the notion of charity-as-fashion-statement. He talks to a couple of bimbo consultants at a kind of match-making charity agency, looking for the “coolest” cause to hook up with: “Darfour is the big one now. What’s Darfive?” And he eventually decides to adopt an African baby, which he claims to have got from a tribe by swapping him for an iPod.

In one of the most shocking sequences, as Brüno auditions candidates for “the hottest baby photo shoot ever” he asks parents of his prospective models if they have any objection to seeing their their baby strapped to a crucifix, surrounded by bees, wasps and hornets. And would the mother of a 30 lb. baby agree to bring the child down to 10 lb with liposuction treatments. The answer to all those questions is yes. But there’s a horrifying cruelty to these set-ups, which reveal less about the inhumanity of the mothers than about their sad desperation to make ends meet in hard times. And although Baron Cohen purports to be satirizing the gullibility of an American duped by showbiz, as an incognito superstar humiliating unwitting plebs, he’s at the top of that food chain.

Also, some of the set-ups seem more contrived than they pretend to be. Borat employed a mockumentary conceit, so there was always a reason for the documentary camera to be present. There are scenes in Brüno—notably a hotel escapade where the staff find Brüno and his homely, love-struck assistant , Lutz (Gustaf Hammarsten), shackled together. It looks like at least a two-camera shoot, but in this supposedly real scene, no one seems to notice that there are cameras present.

Although Brüno‘s strength is in the sum of its gags, there is a narrative arc. But the thrust of the story is that Brüno decides that the only way he’s ever going to get famous is if he goes straight. So he offers himself up as a candidate for gay conversion. The story has a substantial payoff, which I won’t give away here, and the cameo-rich epilogue is perhaps the point of the film. But in the end, the satire has a somewhat confused sexuality: while it’s sending up homophobia, at the same time it’s mocking the shallow, style-obsessed narcissism of that has become gay culture’s public face, which seems to undermine the other agenda.

What’s most consistently brilliant about the film is Baron Cohen’s acting. He never breaks character for a second. Driven by a ruthless wit, his performance is a sustained comic stunt that has no real precedent in cinema. I hate to utter this phrase, which would be music to Brüno’s ears, but it’s worthy of an Oscar nomination. Baron Cohen is also remarkably charismatic. I remember when he appeared on the Golden Globes to accept an award for Borat, and being amazed at how handsome he was; he had more movie-star magnetism than anyone else in the room. It’s high time for this guy to cross over to the other side and play a romantic lead. He’d would leave Daniel Day Lewis in the dust.