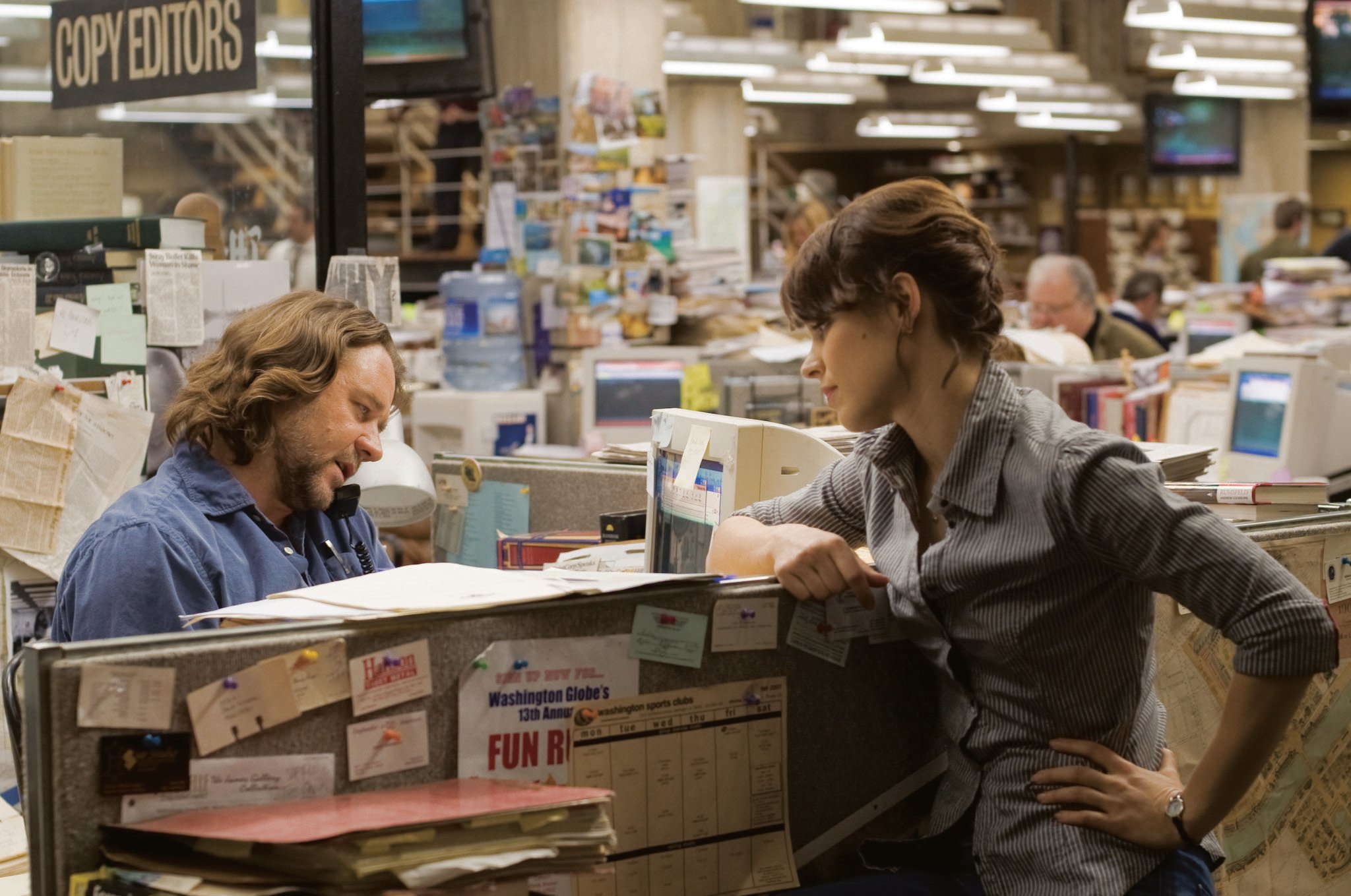 The newspaper is dead! Long live the newspaper! That message that rings as loud and clear as a banner headline in two new movies that make heroes of crusading newspapermen: State of Play and The Soloist, both opening this month. In the real world, everywhere you look, daily papers are ailing, expiring, or making a calculated leap from the burning building of newsprint into the safety net of cyberspace. But that hasn’t dimmed Hollywood’s faith in the hoary romance of the noble reporter. You’d think it would start to wear thin. But in fact, the endangered status of print only seems to have enhanced the glory of men who dispense the kind of noir truth that rubs off on your hands. The heroes of both State of Play and The Soloist are old-fashioned journalists, i.e. hard-working cynics with hearts of gold, who feel their serious talents are being passed over by a new media industrial complex, which cares only for celebrity gossip while pandering to a readership that does not read. State of Play is a conspiracy thriller starring a grungy, plumped-up Russell Crowe as the last good investigative journalist in Washington; Rachel McAdams gives Lois Lane a cyber makeover as a frisky online blogger who becomes his cub reporter; and Ben Affleck is surprisingly well-cast as a well-coiffed, weak-willed congressman who’s plunged into a sex scandal, a murder and a multi-billion-dollar military boondoggle. The story is fiction and it behaves like it: it’s ferociously entertaining and wildly preposterous, as it tries to compress the eight-hour Brit miniseries on which it’s based into a two-hour thriller.

The Soloist is based on a true story, about Los Angeles times columnist Steve Lopez (Robert Downey Jr.) who types to the rescue of Nathaniel Ayers (Jamie Foxx), a homeless, schizophrenic, classically trained street musician.The filmmakers can’t resist fictionalizing Lopez to make him conform to the Hollywood stereotype of a hard-bitten newspaperman (the better to redeem him with), so the drama is not strict realism. But it comes by its inspirational message more honestly. To read my piece in this week’s magazine about The Soloist, which includes an interview with director Joe Wright, go to: Writer discovers homeless virtuoso.

Both these movies are rather high-minded. There are plenty of ideas being flung around about the world (and the press) going to hell in a hand basket—driven home in snatches of dialogue that play like screenwriter solos. But in both cases, the film’s real crusade is over the fate of the writer, the old-school journalist defending the embattled virtue of a good story. And in that sense, Hollywood’s revival of the newspaper romance is perhaps just a thinly veiled revival of Hollywood’s romance with its own mythology.

Unlike at least two editors at this magazine, I haven’t found the eight hours to watch the British mini-series on which the movie is based, but I’m told it’s terrific. Had I seen it, I would probably have a more jaundiced view of the film than I do. You can see certainly glimmers of a larger story behind through the narrative freight train of this compressed version, which barrels along at a relentless pace, freighted with more story than the frame can bear. Along the way, some of the plot shifts are too quick and crisp, and credibility gets derailed. On the whole, however, screenwriter Tony Gilroy (Michael Clayton, The Bourne Ultimatum) has written a smart, pithy script, and director Kevin Macdonald (The Last King of Scotland, Touching the Void) injects every scene with a fierce, kinetic tension. And despite the eye-rolling newspaper clichés, or to a perverse measure, because of them, I enjoyed myself immensely. But then I have some nostalgia for the genre, even when it doesn’t correspond to reality. I cut my teeth in a ’70s newsroom, pounding out triple-spaced stories on flimsy green sheets of carbon-layered paper, which an editor would mark up with a pencil like a tailor hemming a suit, then hand to a copy boy, who would roll it into a pneumatic tube that would rocket to the composing room through a pipe, sealing the end of my daily mission with a satisfying suuuuuck. It was like working in a submarine. Crowe is . . . well, younger. Sure, he plays a caricature of a journalist from the Rolodex age, a sleuth who knows all the cops by their first names and works in a rat-pack hovel of paper debris, a mickey of scotch at the ready in his desk, but his most arcane affectation is that he still uses a clunky old computer with a flashing cursor.

In this man’s world, the female characters are rather thinly drawn, although Helen Mirren makes a meal of her role as the editor-in-chief trying to impose her corporate bosses new world order on her stubborn star reporter. She’s like Judy Dench’s M wrangling James Bond. As the online firecracker, McAdams comes on strong at first, like a Washington version of our own Kady O’Malley. As Mirren’s character describes her, “She’s young, she’s cheap and she turns out copy every hour.” Unlike Crowe’s veteran, who describes himself as “overpaid, old and slow.” Ouch. But the stand-off between hard-hitting print journalism and blog gossip doesn’t last long, as McAdams soon falls into line, serving as handmaiden to the paternalistic Crowe in the big boys’ clubhouse. “This is a real story,” he tells her. “It’s not open to opinion.” And he’s the one who types the final draft of the big scoop on an absurdly over-extended deadline, while the others actually watch him work—as if he’s engaged in a piece of performance art. By the end, and I’m not giving anything away, any semblance of journalistic reality has been jettisoned. He pushes the send button on his keyboard, and off the story goes to the press, without an trace of editing. A writer’s wet dream; or worst nightmare.

I know it sounds like I’m trashing this movie, but the story has real juice and complexity, the performances have muscle, and the political backdrop is ripped from the headlines. I wasn’t bored for a second. I even stuck around for the closing credits, which roll along with the most rhapsodic sequence of newspapers rolling through a printing press that’s ever been filmed—consummating a retro romance between the big screen and the front page.

I’ll review The Soloist online when it opens next week.