Fame as fiction in ‘Teenage Paparazzo’ and ‘The Tillman Story’ 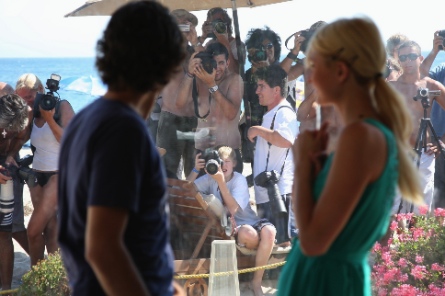 These two documentaries are radically different in substance and tone. The Tillman Story is a jaw-dropping investigation into a high-level fraud and cover-up surrounding the death of a celebrated American soldier. Teenage Paparazzo is a flume ride into the churning froth of tabloid nonsense surrounding Hollywood stardom. But both are compelling, well-told stories that reveal how celebrity is, more often than not, a manufactured fiction.

Teenage Paparazzo is a personal, point-of-view doc from Adrian Grenier, the star of HBO’s Entourage, who shows there’s an inquiring mind behind the pretty-boy charm. Right off the top, he points out that he’s ironically qualified to explore the artifice of fame, considering that he became a celebrity by playing one on television. His subject is a cute, precocious, self-possessed kid named Austin Visschedyk, who has become a serious pro paparazzo at age 14. After spotting Austin in a scrum of photographers, Grenier takes him aside, gets to know him, and decides to turn the camera on him. The director’s declared goal is to explore the nature of paparazzi voyeurism through the bizarre phenomenon of a young teen who stays up to all hours stalking celebrities in the streets of L.A. But the film becomes a textbook example of how a camera changes the reality it documents the moment it enters the picture. As Grenier follows Austin around with a film crew, the actor’s own fame quickly begins to rub off, and inevitably the pint-sized paparazzo starts to morph into a celebrity himself. That begins to interfere with his job, which requires a degree of outlaw stealth. And Grenier’s presence becomes an irritation. At the same time, Austin is clearly chuffed by his sudden fame, and starts to act like another Hollywood brat.

There are number of ethical issues on the table. The permissive parenting of mother who allows her child to chase cars at 2 a.m. is up for scrutiny. But Austin seems decently home schooled, stays away from alcohol and drugs, and makes a preposterously good living. The job, which involves a lot of running and jumping and hiding, seems oddly appropriate for a kid. It’s an adventure, and let’s face it, he’s not exactly a child soldier. Then, of course, there’s the ethical issue of the stalking celebrities and invading their privacy. Grenier interviews some famous colleagues, such as Matt Damon and Julia Roberts, who find the whole business appalling. But the director’s sympathies ultimately seem to lie with the paparazzi pirates, who are simply playing the Hollywood game outside the boundaries set by the publicists. At one point, in an attempt to see the game from their point of view, he even buys a camera and gets in on the action.

Grenier’s doc is not a hit-and-run affair. The shooting stretches over several years, so it becomes a kind of time-lapse social experiment. To illustrate the tabloid ritual of manipulating photos to fabricate soap-opera stories, Grenier rigs a scenario to show just how it’s done. He arranges a series of mock encounters with Paris Hilton, and presto, all the tabloids proclaim that Adrian and Paris are having a raging affair. Even though Adrian’s pap pals must be in on the hoax, that doesn’t stop the fiction from being manufactured. It’s like professional wrestling: sure it’s fake, but who cares?

The director’s scripted voice-over is a bit clunky, as he recounts the myth of Narcissus, and explains how we live our lives vicariously through celebs as if it’s a new idea. But what makes the film work is that it’s essentially the story of a relationship—an evolving Big Brother friendship between a star who helps turn a kid into a child star, then deals with the consequences. There are some odd role reversals—often the kid seems like the hardened professional and Grenier the sweet-faced naif. The narrative becomes a vicious circle of celebrity, a documentary hall of mirrors. And it has some uncanny parallels to the more artful Exit Through the Gift Shop,  in which Banksy, the graffiti legend, turn the camera on a Frenchman who is stalking him with a video camera.

As for the formal object of Grenier’s documentary quest—unpuzzling the paparazzi phenomenon, it becomes apparent that it’s not a parasitical aberration, but an organic part of the starmaker machine. The difference between celebrities putting  their lives on display in “legitimate” publications like Vanity Fair and having stolen moments splashed around the tabloids is really just one of protocol and class. It’s all showbiz, and it’s what they signed up for. But with photographers staking out nightclubs and chasing cars, the charade is still ridiculously primitive. There may come a time when celebrities will learn to outflank the tabloids and the paparazzi by commissioning virtual private lives, soap opera fictions designed for mass consumption. Every star will have his or her own celebrity avatar, like a digital version of the old studio-created fake personality. 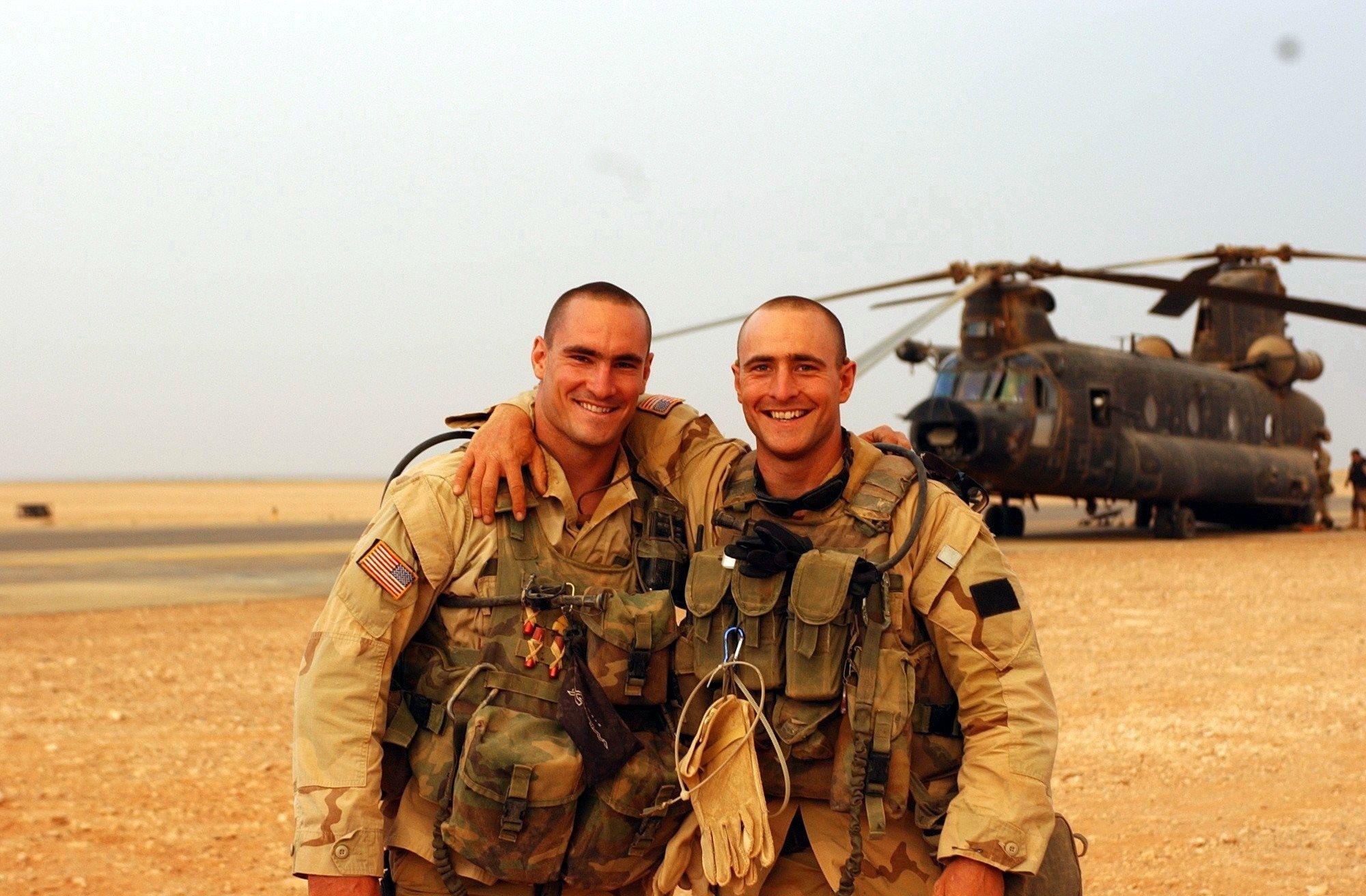 Pat Tillman (left) and his brother Kevin in 'The Tillman Story'

The Tillman Story is an astonishing case study that drives home the familiar adage that truth is the first casualty of war. These days the documentary genre grows more elastic day by day, as it strays into personal memoir and fable, but here is first-rate example of a rigorous investigative doc that pursues a news story well beyond the short-term memory span of the media. Pat Tillman was the most famous U.S. soldier to emerge from the post 9/11 age. He was an NFL star who quit a lucrative career with the Arizona Cardinals to sign up for a three-year commitment in the Army. Even as he enlisted, Secretary of Defense Donald Rumsfield spied an opportunity: “We might want to keep an eye on him,” he wrote in an email to the Secretary of the Army. In Iraq, Tillman had his first brush with military showbiz when he took part in the stage-managed “rescue” of Private Jessica Lynch. After that tour of duty, he came home and was offered a chance to rejoin the NFL and leave the Army with an honourable discharge. But even though Tillman had become thoroughly disillusioned with the war, he would not abandon his commitment. In 2004, he was dispatched to Afghanistan with his brother Kevin, who shared the same platoon. And on April 22, in a canyon near the Pakistan border, he was shot and killed.

Within weeks, the White House has spun Tillman’s death into pure fiction, proclaiming that he was slain by a Taliban ambush. In a scenario worthy of Wag the Dog, a Silver Star is awarded and a heroic narrative is concocted to support it. Less than a month later, the Army has to acknowledge that Tillman was killed by friendly fire. But the details remain obscured. During the next four years, investigations are conducted, reports are filed, a Congresssional hearing is held. But as the documentary reveals, the truth of what happened that day Afghanistan—an incident of fratricide with no enemy in sight—was not just blurred by the ‘fog of war’; it was systematically covered up, starting even before Tillman’s body is cold. When his brother Kevin arrived on the scene, 40 minutes later, he was told that his brother was killed by the Taliban. By the time we get to the Congressional hearing, four years later, the bare-faced deceit seems almost comical, if it were not such a tragic insult to the family. As Rumsfeld bats away question by saying he can’t remember, three Generals pipe up one after the other to add the same excuse to their previous testimony, as if to say: “Sure, I’ll have what he’s having.”

Director Amir Bar-Lev (My Kid Could Paint That) conducts his investigation via  the Tillman family, notably Pat’s mother, Marie Tillman, who spends years on a relentless quest for the truth. It’s a riveting story, made more compelling by the strength of its characters. The Tillmans are a family of fighters—just not the kind that the White House was trying to mythologize. In Pat Tillman, the propaganda machine found a square-jawed icon of all-American heroism who seemed right out of Central Casting. But when you scratch the surface, he doesn’t fit the prescribed mold. He had strong philosophical beliefs and came to oppose the war on terror. He also left specific wishes that his reasons for enlisting remain confidential, and stipulated that, in the case of his death, he not receive a military funeral. Although he was not cut down in a firefight with the evil-doers, he was in fact a heroic figure, and the authentic portrait  drawn by the film turns out to be far more inspiring than the fable the White House created for him.