Glee and the coma plot

Comedy comas are predictable, but Glee gets away with it by being earnest

One of the things that makes Glee popular is that it has no qualms about doing the kinds of episodes that audiences still like, but TV writers had mostly grown tired of. There’s a hint of irony in the way Glee uses these plots, but nothing like the self-reflexiveness of 30 Rock or Community; just as we are free to accept Glee as an un-ironic musical if we want, we’re also free to take its crazy stories at face value. So last night they used one of the corniest plots known to modern mankind — a regular character goes into a coma for the episode, and his loved one stands by his bed with the crying and the hand-clutching — and sort of played it straight. While I like the show better when it doesn’t try to make sense (that is, I actually like the Ryan Murphy episodes, with their complete insanity), I have to hand it to them: they’ve proven again that you can get away with almost any story if you don’t act like you’re ashamed of it.

I say the coma plot is “corny” on comedies because, first of all, it uses a very serious problem for an easily-solved, one-time-only story, and second of all, because it’s been done so often that we sort of know how it’s going to play out. The subversion last night on Glee was simply that Kurt didn’t pray to God for his father’s revival; most of the previous versions featured a character addressing God directly at the comatose character’s bedside. But otherwise, we know the story from several comedies, and I’d be interested to hear where you first saw it. I think the first sitcom to use it may have been Happy Days — which is quite likely where many of the later shows got it from — where Richie went into a coma because the writers wanted to show kids, through Fonzie, that it’s okay to cry sometimes. This episode kind of set the pattern, though at least the big song was an original composition — why don’t the guys at Glee get Leather Tuscadero in for a guest appearance, hm?

Then there was “So It’s Come To This: A Simpsons Clip Show,” where Homer went into a coma for most of the episode. Bart revived him not by praying to God but by confessing that he caused the accident that put Homer there, which caused Homer to rise from his bed and strangle the boy.

Boy Meets World, which borrowed more heavily from Happy Days than any show except That ’70s Show, did it as the climax of an episode where Shawn (Rider Strong) gets involved in a cult; an episode that seemed to be primarily a showcase for the devoutly Orthodox creator Michael Jacobs to harangue kids about the need to accept God in their lives (if you don’t, you’ll be empty inside and join a cult!). He’s snapped out of it when his favourite teacher conveniently has a motorcycle accident and goes into a coma. The over-the-top final monologue (“Don’t blow me off, God!”) was published in at least one book of monologues for kid actors, which is why you can sometimes hear them using it as their audition piece — there are a couple of kids on YouTube who’ve taped themselves performing it. But the really hilarious thing: this was the last episode the actor playing Mr. Turner ever appeared in, so many fans weren’t sure if he was alive or dead for at least a year afterward.

Then in the ’00s, My Name Is Earl put its title character in a coma for an arc of several episodes. (Bringing it, I suppose, a little bit closer to dramas where comas are actually taken semi-seriously and can last for more than half an hour — but it was pretty much the usual coma plot otherwise.) This was in the third season when the show squandered its initial popularity and basically ruined everything.

Other coma plots on comedies? I’ll tell you that the first comedy I saw this in was not a TV show, but a comic book story originally published in 1972. Seeing the great Samm Schwartz use his signature comedy style to draw Jughead in a coma was pretty traumatic for a kid, I tell you what. 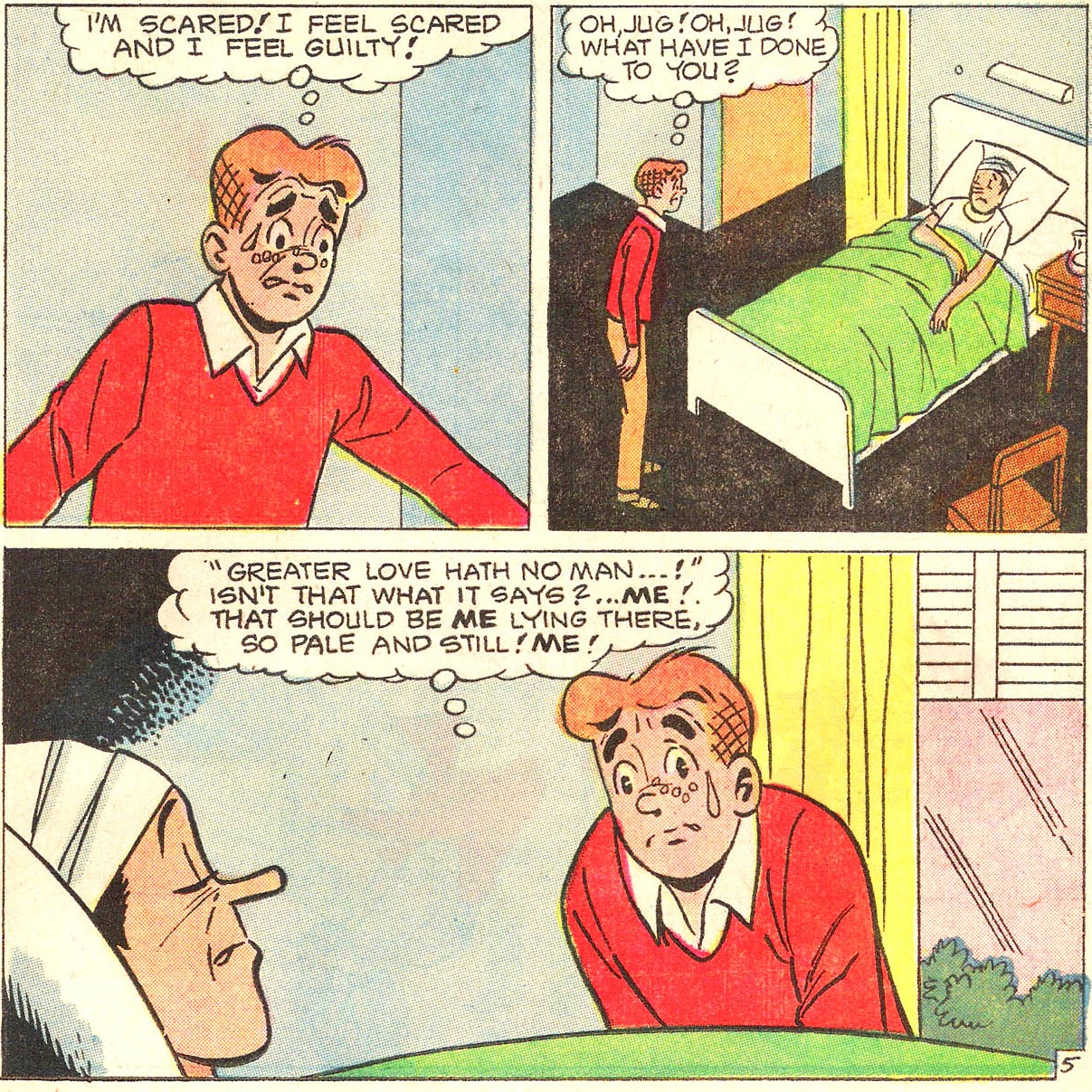 It was a pretty good story, but that’s just not right — and if that story inspired the Happy Days episode that in turn inspired all these other Comedy Comas, then it’s got a whole lot to answer for.