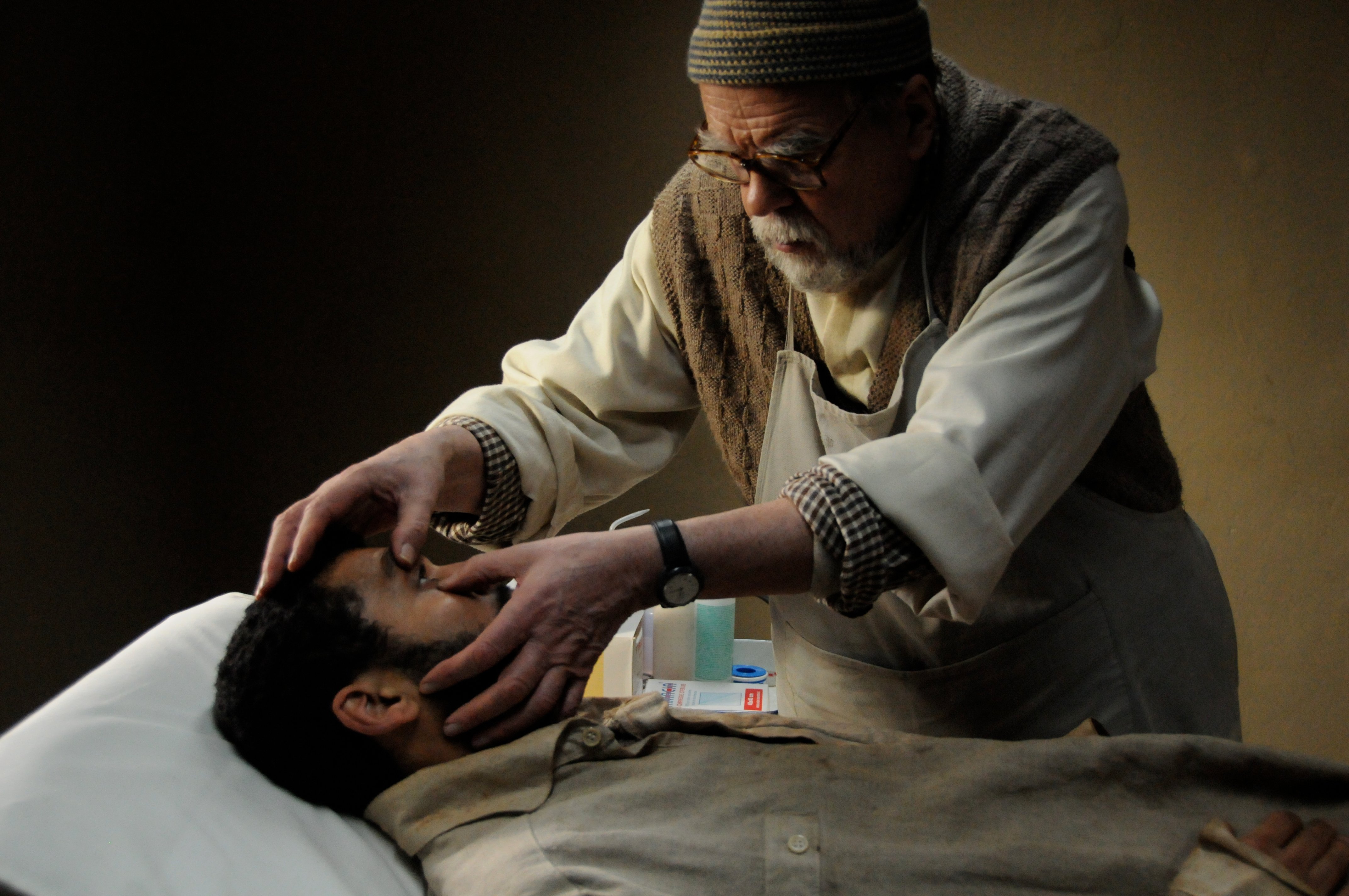 Toward the end of the Cannes festival, which will announce its awards in a hour or so, an indisputable theme began to dominate: international terrorism. I just caught up with Des Hommes et des dieux (Of Gods and Men), by French director Xavier Beavois, which has emerged as a strong contender for the Palme d’Or, although no single film has really broken ahead of the pack this year. Of Gods and Men is loosely based on events leading up to 1996 Tibhirine massacre, in which seven Cicstercian monks were held hostage then beheaded by Islamic fundamentalists in Algeria’s Atlas Mountains. This sensitive drama, filmed imbued with a reverential calm,  takes us into the quiet beauty Monastery World, where the daily rituals of singing hymns, tending gardens and giving medical aid to the villagers is distrupted by the mounting threat from terrorists, who have started cutting throats of infidels in the village. The middle-aged and elderly monks are, well, as adorable as the Seven Dwarves. 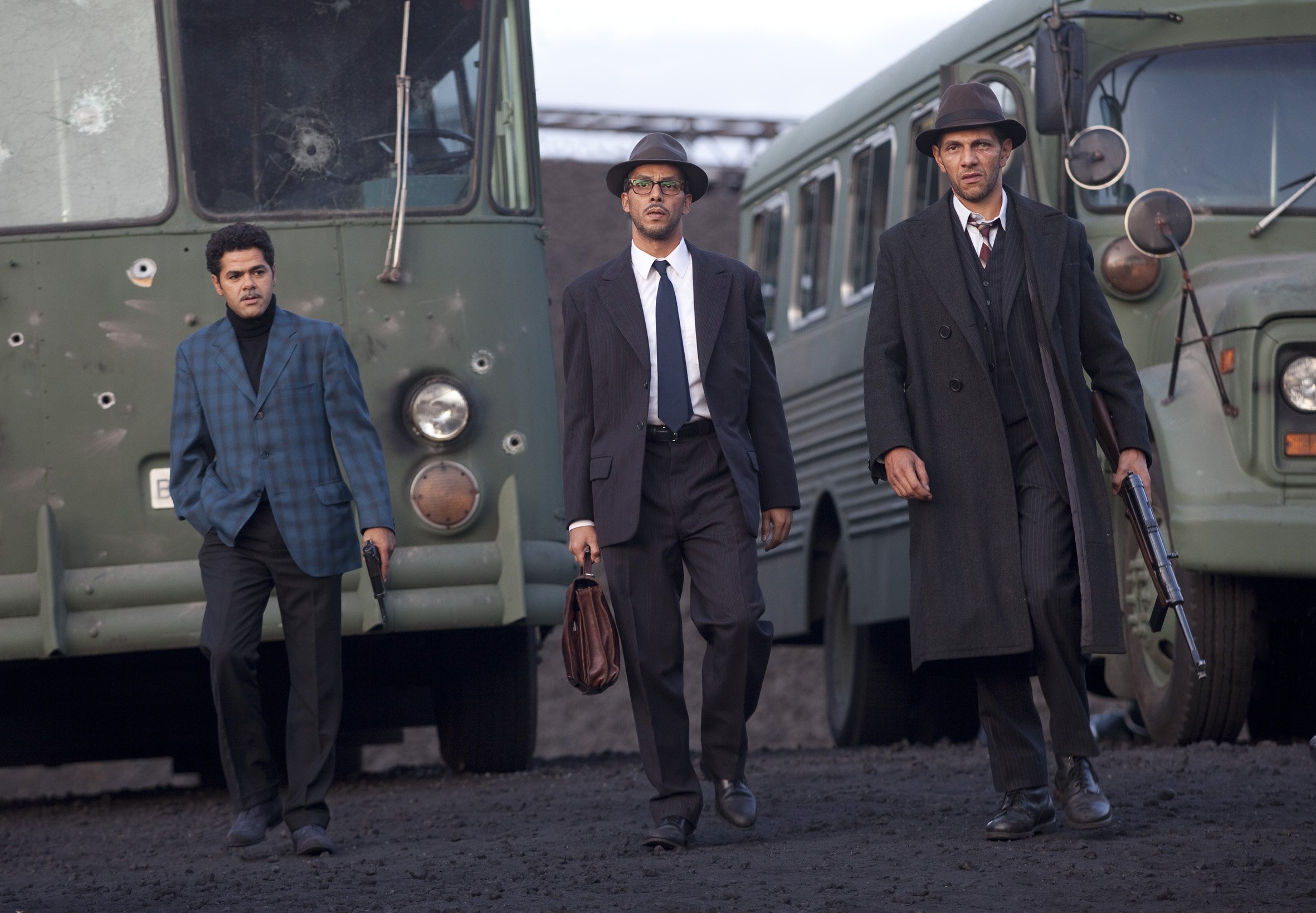 A scene from 'Outside the Law'

France’s colonial  history in Algeria, which remains an open wound, reared its ugly head again in Hors de la loi (Outside the Law), but from a radically different viewpoint. Directed by Rachid Bouchareb, this fictional drama follows the fate of three Algerian brothers who emigrate to France after the Second World War–as the war ended, 15,000 to 45,000 Algerians (depending on your source) were  massacred by French troops at independence rallies. The movie opens with a horrifying sequence of the massacre, then turns into a kind of terrorist gangster movie as the three brothers become involved in an armed protest movement in France. They are the Good, the Bad and the Ugly of the Algerian revolution. One is a blunt intrument with a good heart, another a cold Leninist mastermind, and the third is a club owner and pimp in Pigalle who is trying to live the dream.  Unlike the monastic Of Gods and Men, the movie unfolds as a virtual action picture, with the terrorists serving as its flawed but glorious Godfather heroes.  No wonder it was controversial. The evening of its premiere on Friday, the Croissete was lined with paddy wagons as hundreds of riot police prepared for right-wing demonstrations. There were only scattered protests, but the security was extra tight at the Palais that night.

The terrorist theme, meanwhile, has surfaced in two more films in competition: Douglas Liman’s Fair Game, an American movie starring Sean Penn and Naomi Watts, which tells the story of the Valerie Plame/Joseph Wilson WMD scandal, and Route Irish by leftie Brit filmmaker Ken Loach, a tale of dirty tricks within the ranks of military contractors in Iraq. But by all accounts the best movie about terrorism in this considerable field of revolutionary drama is Carlos, from French filmmaker Olivier Assayas, which played out of competition. It’s a five-hour saga about Ilich Ramirez Sanchez, aka Carlos, whose terrorist career blossomed in the 1970s and 1980s, taking  him from pro-Palestinian activism to the Red Army, and finally into refuge under Sudan’s Islamic dictatorship. To my regret, I never found the five hours to watch Carlos. But it will no doubt be coming to the Toronto International Film Festival in the fall.

Now the awards beckon. Rather than going to the stiff black-tie ceremony, critics traditionally to watch a live video feed in an adjoining theatre, where they consummate the festival experience by howling catcalls at the screen. I’ll make my time-stamped predictions now, to be proved right or wrong very shortly. I expect the Palme D’Or to go to go to Of Gods and Men. I think Tim Burton’s jury will award Best Actor to Biutiful‘s  Javier Bardem for his virtuoso performance as as drug-dealing illegal-immigrant landlord who has terminal cancer–Mexican director Alejandro GONZÁLEZ IÑÁRRITU (Babel) throws everything at the screen in this visceral melodrama. The response to it was so polarized I’d be surprised if it wins the Palme D’Or. But I’ve heard it on good authority that Burton liked it. So you never know.  As for Best Actress I predict, and hope, that it will go to Junghee Yun for her extraordinary performance as a Korean grandmother in Poetry. Now it’s time to watch the awards. Outside I can hear the screams from the mob gathered in the street as the stars make their way up the red carpet . . .  stay tuned.

FILED UNDER: Cannes Carlos Inarritu Of Gods and of Men Outside the Law Rachid Bouchareb Route Irish terrorism Xavier Beavois