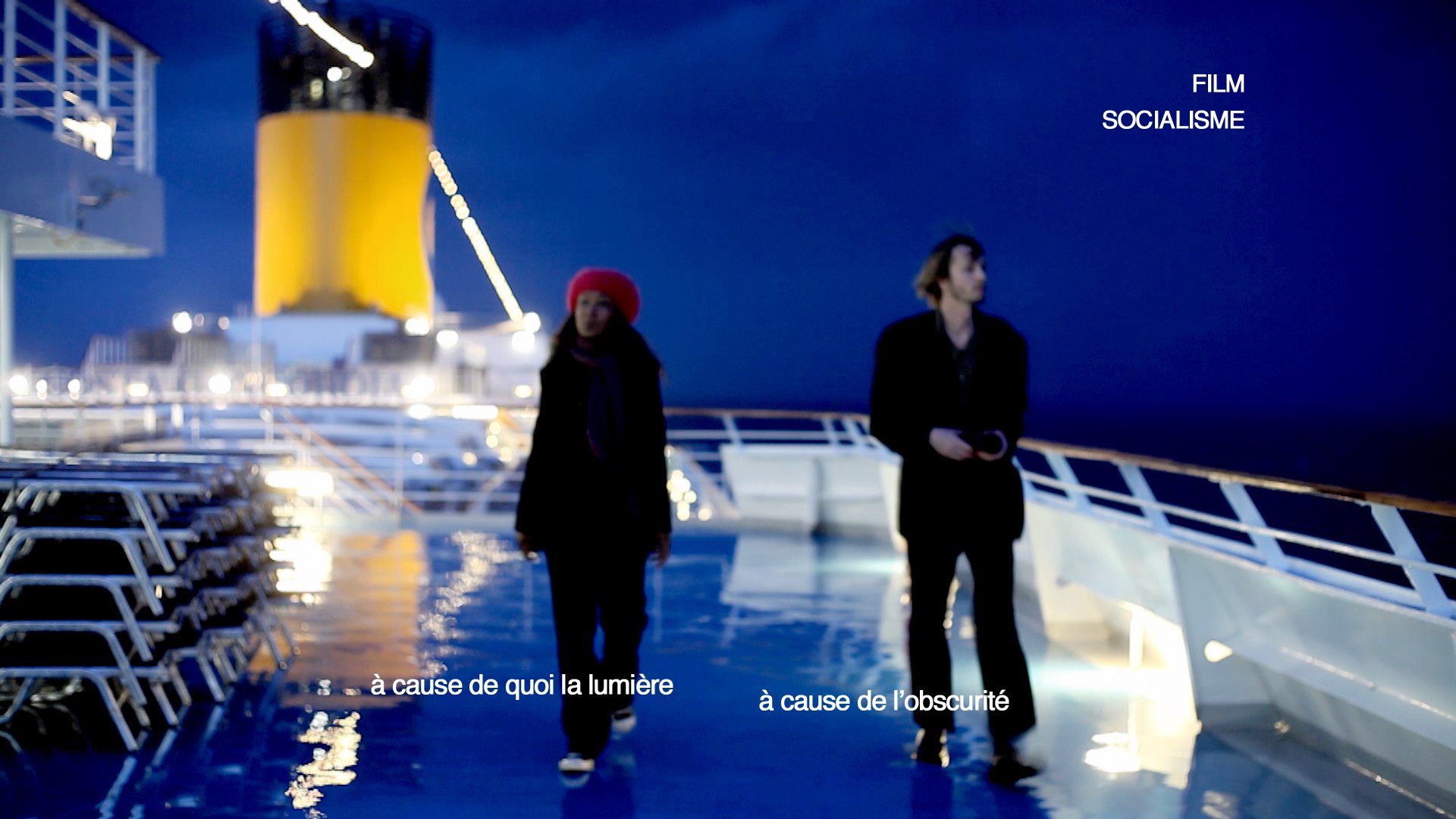 The Internet is awash with lies. I had promised a daily blog from Cannes, but between the vortex of the festival and magazine deadlines, I seem to have lost a day, at least. Time to catch-up. Where were we? . . . Oh yes, anticipating Jean-Luc Godard’s new film, and his press conference.  Godard’s inexplicable picture,  inexplicably titled Film Socialisme, is a dream in progress.  As avant-garde as anything the iconic auteur has ever done, it unfolds as a cool delirium of images and  words that stubbornly deflect meaning or  interpretation. The first part is set mostly on a giant cruise ship, a candied Las Vegas world of laquered colours. Some of the images are shot in lucious, liquid compositions; some in  pixilated low-rent video. The camera finds tragic beauty on a grey, heaving sea,. There’s no discerable narrative.  The second part of the film revolves around  a gas station, again painted in toytown colours.  A white llama and a black donkey stand hitched to the pumps by a red car, and next to them a woman reads Balzac’s Illusions Perdus. Dialogue, voice-over and block-lettered text telegraph inscrutable penseés. Perversely, to the frustration of some Anglo viewers, the English subitles offer mere fragments of the French dialogue: “Spanish gold stolen . . . noneed fear Moscow . . . space is dying. . . don’t talk about the invisible show it a smile that dismisses the universe”  I undertood the French, but found the eliptical titles more true to the spirit of the film. There are flashing allusions to historical epicentres–to Odessa, Palestine, Hellas, Naples, Barcelona and Egypt. Occasionally, in the flood of imagery, I’d find myself drifting in and out of sleep. But without guilt. Whatever random shutter speed my eyelids applied to the film would just be another level of Godardian elision. I’ve looks at dreams from both sides now. . . . I’m sure it was the Master’s intention that at least parts of his movie should be watched while sleeping.

After the film a crowd gathered for Godard’s press conference, until we were told he was a no-show. He would not be there to explain an inexplicable film, true to the words spelled out by its final block-lettered title: NO COMMENT.  So I perused to the press notes, looking for answers. There were none. Just a Q & A that was as elliptical as the film. . .

Q Cinema and films – the difference?
A The same, cinema is not necessarily to be found in films. . .
Q Static shots only?
A The chemist doesn’t do tracking shots in front of his microscope nor petrol companies when drilling into the sea bed. . .
Q Blogs and SMS?
A In a way, behind this young thinking similar to an earthworm, one thing matters to all these passionate Phoenixes: to survive and find in the depths of chaos a chance to resurrect (cf. Prigogine).
Q Politics again?
A Yes, as modern democracies, by rendering politics a domain of separate thought, are predisposed to totalitarianism.
Q And images?
A The old magus Bachelard spoke about implicit and explicit images. We might cite Jules Renard’s image of silence: snow falling on the water. . .

Well, I guess that just about covers it.