The Hung portion of HBO’s TCA press tour was (reportedly) one of the more interesting bits of what is usually a not-very-interesting event. I mentioned this in an earlier post, and Todd VanDerWerff talks more about this in his review of the latest episode of Hung, but basically the producers got called on their decision not to show the main character’s penis, and replied with a mixture of the snickering double-entendres that characterized the whole presentation, and slightly pretentious justifications about the “Platonic ideal” and such. For people who, like me, don’t really care for the show (I think of it as like Loverboy only not as good, and certainly not as funny), it seemed to sum up what Hung is: sophomoric penis jokes plus pretension plus a lack of courage when it really counts.

Many others like the show, and Todd makes a good case for it. On the subject of their actual excuse for not showing the Memorable Member and whether it makes sense, I see their point — nothing they could show could possibly live up to the myth they’ve created — but I think it’s a case where a half-decent excuse neatly coincides with what their audience will accept, and the double standard for male/female nudity is well-known at this point. If the network would prefer that you not show something, then you can always make up some kind of explanation about why it would spoil everything to show it. But it’s doubtful; with the right writing, lighting and special effects, you can get the audience to go along with the idea that something is “ideal” or “perfect,” whether or not the audience member (there’s that word again) agrees with the reactions of the characters onscreen. It’s like — though this did not involve nudity — Al Capp created a character for the Li’l Abner comic strip called “Stupefyin’ Jones,” whose figure was so unnaturally perfect that men would literally freeze in their tracks at one sight of her. Capp kept the character obscured behind trees or walls every time she “appeared” in the story where she was introduced, because nothing he could draw would live up to the characters’ reactions. But when Li’l Abner was made into a stage and screen musical and the character was included, they rightly felt that they couldn’t get away with hiding the character; they had to show her, so they hired the young Julie Newmar to play someone whose body could semi-plausibly paralyze men. What 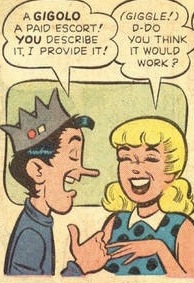 Hung is doing is, in essence, the equivalent of trying to hide Stupefyin’ Jones behind a tree every week.

The constant focus on something that is, essentially, self-censored puts Hung in a class with lots of broadcast network comedies that make jokes about something they’re not allowed to show. That’s not a deal-breaker, and a lot of comedy can be mined from the fact that something naughty is kept offscreen (going back to that episode of The Dick Van Dyke Show where Laura was trapped in the bathtub, offscreen, with all the world making a mental picture of Mary Tyler Moore in that unseen state — or that other Dick Van Dyke episode where a nude painting of Laura was never shown, only the reactions of the characters to seeing the painting). I don’t think Hung has played the central conceit for that kind of comedy, mostly because I don’t think it’s funny enough; its comedy scenes are kind of bog-standard stuff. And since I don’t really feel any reason to care about the predicament of the central character — he’s the sort of person that only Hollywood could consider a potentially tragic figure — I can’t find myself cheering for him.

You can also argue that the central conceit is not as central as the title implies; it feels like something grafted on to, er, enhance a premise — a guy rents himself out as a gigolo, thereby furthering the ensuance of adventures that are sometimes of a nature that could be described as wacky and/or hijinks — that is not all that new. One way of looking at this situation is that HBO has gotten to the point that it requires big high-concept gimmicks to sell its shows, and this may just be a high-concept gag that overshadows the rest of the show. That, as I said, is one way of looking at it. But, from another point of view, it could be that the gimmick is necessary to provide the note of fantasy and whimsy that Hung is going for. The idea of the show, as Todd VDW explains, is that Ray has a special, almost magical power that can lift him out of the gloom and doom of the 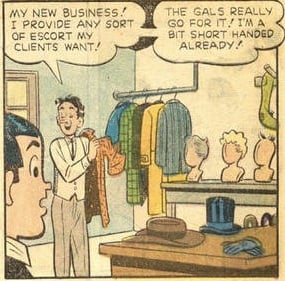 economic crisis and the crumbling city he lives in: “the entire series is built around the idea that Ray can use the special gift he never knew he had to ride out the recession and that the attempt in doing so will unlock special gifts within Tanya that she never knew she had, just like in Wizard of Oz.” The writers are hoping that this show will be something more than another gigolo story (note to Rob Schneider: “male gigolo” is redundant). Their idea is that in the midst of sort-of-realistic misery and problems, there is a fantasy character who can change things in unexpected ways. Sometimes the fantasy character is Ray, sometimes it’s like he’s a realistic character attached to a fantasy character (the unseen magical thingamajig with its amazing power to please), but what seems to be fairly consistent is that Ray wants to live up to his gift and be the best darn gigolo he can possibly be.

Conceptually, this doesn’t appeal to me all that much, because the show wants to have it both ways: it wants to be a fairy tale and it wants credit for having something big to say about the times in which we live and what people have to do to survive in a new economy. The Sex and the City comparison is apt, but that show usually knew that it was escapism; Hung is also a work of escapism, but thinks it’s something else (as if the very act of setting the show in an economically-ravaged city, as opposed to an upscale area, automatically precludes it from being escapist. But Li’l Abner was escapist and Dogpatch is way poorer than Detroit). But whimsy is something that hasn’t been seen much on pay cable lately, so I suppose it’s worth being grateful that they’re at least trying it, however haltingly.

Ultimately, though, I think what they’ve got here is Loverboy without Patrick Dempsey and with a  veneer of social consciousness.