"I demand to know what happened to the plucky lawyer and her compellingly short garment!"

The news that Fox will release a complete DVD set of Ally McBeal is interesting insofar as it suggests a possible new model for TV-on-DVD releases: bringing out the whole series at the same time as the first season, rather than waiting to bring out all the seasons individually before repackaging them together. In the current DVD market, where people are less inclined to make impulse purchases, a complete-series set may actually be a better investment for a studio, since these sets are quite popular as holiday gifts. (A complete set makes a good Christmas gift for an aging relative who remembers the show, and still costs less than something more conventionally useful.) Also, studios have to face up to the fact that with the inevitable declines in sales for each subsequent season of a show, most non-current shows simply can’t sell enough to get all the seasons out one at a time.

The announcement of the show itself would be more exciting if it weren’t for two things: 1) There is almost no chance that Fox will pay for the music, and 2) Fox’s international division already released the complete series in PAL format with all the music intact. (Music clearance rules are different in other regions, though don’t ask me exactly what the differences are.) So a multi-region DVD player would probably be a more sensible investment than the upcoming set.

As for the show itself, I never really got into it, and still have trouble getting into it even as late ’90s nostalgia. It certainly is one of the essential cultural artifacts of that distinctive, strange era, the late ’90s. Interestingly, not only did this show burn out really quick, but most of the shows that have imitated it, or been influenced by it, have bombed. It spawned a ton of single-professional-girl comedy-dramas, most of which tanked (Miss Match) as well as lots of quirky lawyer shows that bombed, some deservedly, some undeservedly (Eli Stone).

The announcement is at TV Shows On DVD, along with bi-lingual box art that might be used for the Canadian release. The box art does confirm one point that can’t be confirmed too often: Calista Flockhart’s gams really weren’t that great, and therefore it’s hard to explain the obsession those Futurama aliens had with the shortness of her skirt. 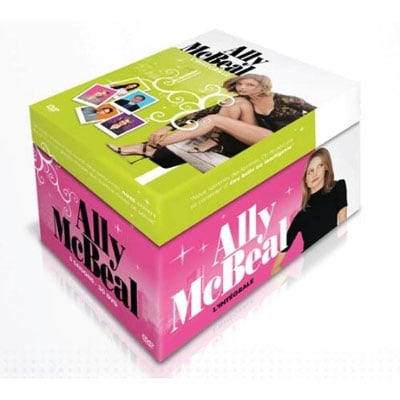