Last Friday I had the opportunity to talk to Shawn Ryan, creator of The Chicago Code, a very promising new drama that premieres next Monday. Ryan, one of the many impressive TV writer-producers who cut his teeth on Nash Bridges, has become a very impressive and prolific writer-producer, creating The Shield and acting as showrunner on The Unit, Lie To Me, and most recently Terriers. The new show is a sort of epic cop show starring Jason Clarke and (after previously appearing as a recurring character on Lie To Me) Jennifer Beals. It’s one of a number of recent shows, most famously The Good Wife, that tries to infuse the so-called procedural form with a more epic quality by presenting a setup that is much bigger than one case; in this show, the idea is to incorporate crime drama, family drama, and politics. Ryan was nice enough to answer a few questions about the show, plus one about Terriers, and he even patiently answered a question he must be getting a lot lately — about titles. 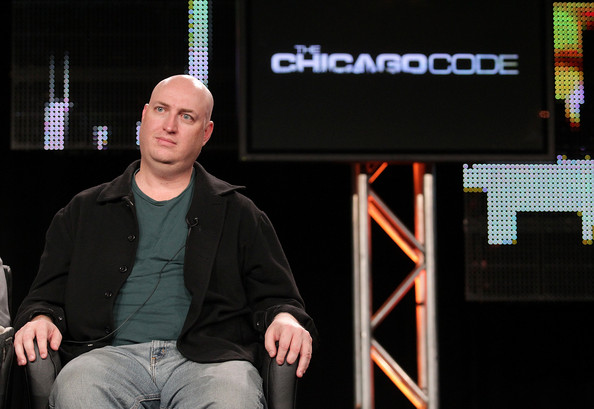 How the show was developed

I started off trying to think of what would be something fun and interesting to do in Chicago. It really came from sort of thinking that TV work and movie work had gotten so L.A. and New York-innundated. And we had this whole rest of the country that doesn’t always get focused on. Even some of the shows that allegedly take place in Chicago aren’t filmed there. I’ve always been fascinated with Chicago and the history of its politics and the crazy way the city works, and yet the amazing city that’s come out of that. It’s an interesting dichotomy. And I started thinking about it in terms of police officers, and then expanded it into how the police department interacts with the community, and the politics of running the police department, and the things kind of added up one by one.

The premise of the show

I would say that the show is part cop story, where there are cases we investigate, but primarily there’s an ongoing story involving city corruption, an Alderman, played by Delroy Lindo, who may or may not be up to no good, and how illegal activities get done in the city. And these two heroes, played by Jennifer Beals and Jason Clarke, who are determined to take on the system that has been decades in the making. Having said that, I think people tune in not necessarily for worlds or for situations, but for characters.

Teresa Colvin, as played by Jennifer Beals, is the first female police superintendent in Chicago, so she’s in charge of 10,000 cops, and that job is as much political and PR as it is police work. We get to see how she operates in a man’s world, the resistance she faces both internally and externally. Jason Clarke is someone who used to be a partner of hers, but while she kept rising up the ranks, he is someone who was very happy operating on the streets. He remains a detective. He’s a Polish-American guy who comes from a family of cops, who has a very kind of typical Chicago kind of toughness and sense of humour about him. He’s the guy caught up in an interesting personal life; I don’t want to give too much away.

I do think that there are some darker places you can go when you need less of an audience to survive. Now, I don’t think it needs to be broken down quite so simplistically. That doesn’t mean the “good guys” can’t be human, and can’t have some qualities that aren’t ideal. I think our characters have their faults and weaknesses, and I think they’re human, and I think we tell stories that are complicated and interesting. I do believe that network TV can be great. I don’t cede quality television to the cable networks. But there is a difference, and I do think a lot about the difference in the audiences that watch Fox and those that watch FX.

On filming in Chicago

I’ve got to give a lot of credit to Jim Sharp, who’s the head of production for the studio. He had done a lot of groundwork before the pilot was even picked up, because I had talked with him about the viability of filming in Chicago. And they had filmed Prison Break a couple of years there, so they knew the people on the ground… and when it came time to film, we got incredible support from both the city and the state, which is crucial in this day and age. We were able to film in some pretty amazing places in Chicago, able to use the city trains for filming and get them stopped and started when we needed to, which is something that would be very difficult to do in New York or Los Angeles.

The potential advantage of this show over a show like The Good Wife, which is set in Chicago but films in New York

One advantage we have is that we’re actually out in our world. We’re able to actually be epic. We don’t have to rely on being in a law firm and a courthouse, and then hiding New York City and trying to pretend it’s Chicago. We film in Chicago; six out of our eight days for every episode are filmed out in the world. We only have two days on the set, which is probably the opposite of most of the shows on TV. We’ve utilized most neighbourhoods in Chicago during the course of this show. It’s not just downtown in the loop and everything.

I would say that the audience has a myriad of entertainment options, and you do have to give them something they can’t get anywhere else if you want them to tune in. I do think this show has an epic grandeur, the way that it’s shot, the locations where it’s shot, the stories that we tell, they’re big and they’re brash, much like Chicago itself, I think.

When you make your pilot you go around, and you have these people come in and watch it and give you thoughts. You can’t give those people’s opinions too much weight, because it’s a small sample size. And yet if you have that in mind, you may learn things about your show that you might not have known before. And one thing we learned is that the term “Ride-Along” isn’t as familiar to people as those of us who have dealt with cops thought. So a lot of people didn’t know what it meant. And additionally, for people who did know what it meant, it kind of implied that it was only a police show. And if there’s one thing we learned in our research, it’s that people feel there’s a lot of cop shows on the air, they have their favourites that they like to watch, and there’s a pretty high bar for brining a new one into their life. And we felt that this show was more than just a cop show; this isn’t just “well, here’s a dead body in the first scene” and it’s all dry investigative work until we solve the case. We do think this is a more epic story about a city.

And so as we thought about the title, especially as we were making more episodes and seeing where the story was going, the title “Ride-Along” seemed less and less appropriate. I talked to the network about that, and they agreed, and we talked about how great it would be to have the word “Chicago” in the title, as the city had become such an important character in the show. Ultimately “The Chicago Code” was what we came up with, and the more I see it the more I like it.

One difference is that we can see it coming further ahead. This sounds strange, but we were told a couple of weeks before the Terriers premiere that the show wasn’t tracking well. And so I had an idea even before the premiere that we had a problem. Which at least gives you the satisfaction, crazily, that, well, at least it’s not anything we’ve done. It’s not like huge amounts of people sampled the show and thought it sucked and went away. Whether it was something conceptually about the show, whether it was right show, wrong network, title, marketing — whatever it was, it was something that didn’t have to do creatively with our work.

And I always take the attitude to control the things I can control. I can control the creative quality of the shows. What I don’t want to do is get put in a position where the work really suffers. I would rather have made that 13 episode season and be well and truly proud of those 13 episodes, than to come back for a second season with limited resources and be told that to draw an audience, we’d have to change this and that. I would rather be canceled and have that 13 episode season live on in posterity in its pristine form… I’d like to think that we’re in good company, like Freaks and Geeks. I hope people consider us in that company. That was a pretty great show.