Is Kate pregnant? Check out her belts

Our resident royal watcher is finally ready to chime in 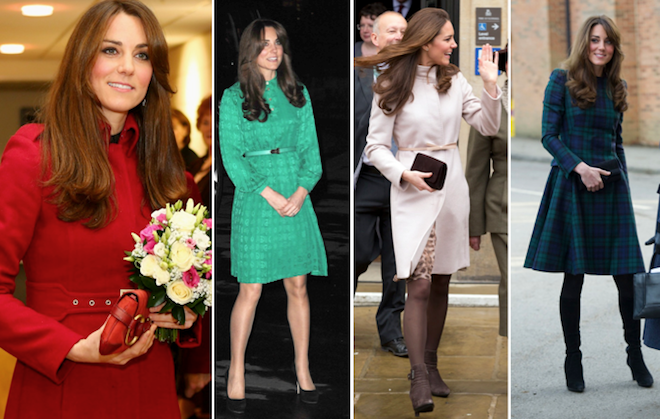 There’s no need to even ID “her” as Kate, duchess of Cambridge, in the question I’m asked at least once a day. Every time she adopts the normal “Kate pose”—her hands (and often a purse) clutched defensively in front of her stomach, the questions would come fast and thick. Until this weekend my standard response was: “The world will know when William and Kate announces it. I’m not going to guess.”

Well, now I’m guessing. There are three reasons for my change of heart—a red belt, a green one and a beige one, plus a plaid outfit.

First the background: this is a woman who likes formfitting outfits. And who is fond of tight belts (also, here and here), and tightly belts her coats. That’s why I didn’t think anything was odd when I first noted she wore a red coat to a rugby match on Saturday. It was an L.K. Bennett creation that she’s worn before and there appeared to be a belt. Nothing new, I thought.

Then I saw this What Kate Wore posting. She’s wearing the belt that came with the coat, not a big statement belt like she normally does. Look at the close-up photo of the belt. It looks like she’s got it buckled into one of the last holes. There weren’t many photos to compare belt holes on either side of the buckle—yes, I’ve been reduced to counting holes on a belt—and the stock pictures I found of the L.K. Bennett coat weren’t of a good enough resolution. So I wondered but wasn’t going to openly speculate.

Then came her leprechaun outfit at the Natural History Museum on Tuesday. The vivid green dress by Mulberry has been seen, and panned, before by critics. The pleats aren’t flattering, the colour is harsh and unforgiving, but it’s also a dress that can hide a changing figure. Avoid pictures that feature the “Kate pose”—really, she has to learn how to stand without adopting a defensive posture—and look at the belt. It appears to be positioned higher than usual. Hmm.

Then came the trip to Cambridge with William. While the coat was slim the belt is just a bit loose–and totally unlike Kate.

Then today, she went to her old school and wore a plaid coat dress that was formfitting on top, but with a peplum and heavily gathered skirt. Hmm again.

So is she pregnant? It could just be a confluence of fashion choices, but after this week I’ve changed my stock answer. Now it’s “We won’t know officially until they announce it, but I think she could pregnant.”