No official word from the palace yet, but chances are they'll consult with lawyers...again

Oh boy, here we go again. Five months after Italian tabloid Chi and a bunch of other rags published topless photos of the duchess of Cambridge, while vacationing at a secluded villa with her husband in Provence, they’re at it again. This time Chi has photos of Kate on a vacation with her husband and family on the private island of Mustique in the Caribbean. She’s apparently visibly pregnant and wearing a bikini.

No reaction yet from palace officials, but given Prince William’s fury at the last invasion of his wife’s privacy, you’ve got to bet that they’re consulting lawyers again. Interestingly, while the London tabloids are covering the story, they are also blacking out the relevant photo when they reproduce the Chi cover.

Still, everyone was expecting the photos. Kate is the hottest commodity in the paparazzi world, and no one has yet caught images of her expanding tummy. And lest we forget, Diana was also snapped in a bikini on a Caribbean vacation while pregnant with William. (This pinterest page has links to the snaps, or see below.) Back then, the Queen and household officials roundly criticized the invasion of what was clearly a private vacation. It’s 30 years later, and nothing really has changed.

UPDATE: From the palace via the BBC
The palace said it was “a clear breach of the couple’s right to privacy”. A St James’s Palace spokesman said: “We are disappointed that photographs of the Duke and Duchess on a private holiday look likely to be published overseas.” 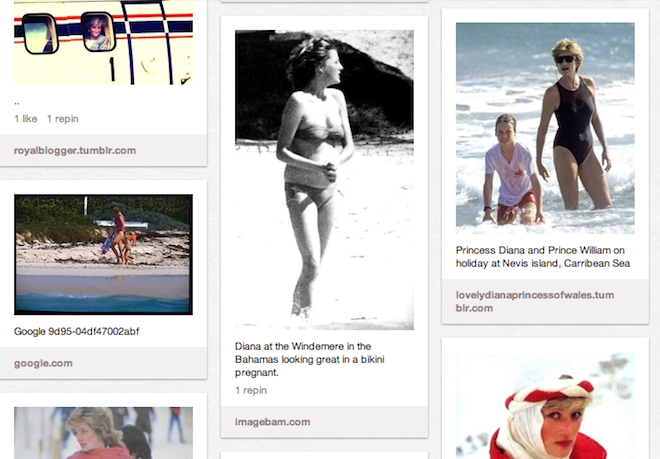