jessica simpson: please contact me for help with your penis-based problem

It’d be spiritually fulfilling freaking lucrative to be the person to whom famous and also rich people turn when they are at their most desperate but still solvent. I fear I’ve left it too late, though: I’m 40 now and I’m not sure I’ve got the upper body strength to dispose of a dead hooker.

Here’s one thing I do know for sure: my exclusive firm would cater exclusively to the crème de la crème of Hollywood talent, and also Lindsay Lohan because she has cash and poor judgment. A tasteful sign out front would ask that all visitors respect the three-Baldwin maximum. Maybe I’d even give back to the community by lecturing up-and-coming celebrities, possibly as part of a double bill with Sean Penn’s penetrating seminar, “The History of the Paparazzi and How to Punch Them in the Face.”

While I will always find time for clients in the ninth circle of damage control hell – way down past Hugh Grant and his penis, deeper still than Pee Wee Herman and his penis, down there beyond even Jessica Simpson and her penis (I made up that last one, but in this business you’ve got to be prepared) – my niche in this crowded field will be a focus on prevention.

Most “experts” do the sum total of jack and squat until their clients have said cheese – or, in Nick Nolte’s case, “Are you sure you don’t have a comb? Oh well…” – for the mug shot. This is risky because, as Mel Gibson proved, we live nowadays in a judgmental world where some people are unwilling to forgive you for one little drunken, expletive-laden, misogynistic, anti-Semitic rant in which you claim Jews are responsible for all the wars in the world.

That’s why I’ll educate my clients. I’ll devote time to preparing them to stop a scandal before it starts. My philosophy can be summed up thusly: You’re famous. People expect you to drive drunk, smash up luxury automobiles and impregnate buxom teenagers. Just don’t blame Jews for all the wars in the world and everything will be okey dokey!

Consider the reputation-saving benefits to Hollywood stars and starlets of taking my helpful, informative quiz.

1. When you are pulled over by the police for driving under the influence, and you will be, which of the following statements is most advisable?

a) Good evening, officer. Is there a problem?

b) Good evening, officer. The Jews are responsible for all the wars in the world.

Answer: a. (If you answer b, at least be certain not to make any other anti-Semitic, sexist or self-aggrandizing remarks. Oh, you did? Well then you’re pretty much boned.)

2. When you are reprimanded by a studio head for jeopardizing a film’s production with your heavy late-night partying, and you will be, which of the following statements is most advisable?

a) I will report to the set at my designated call time.

b) I will report to the set once I locate my underpants.

Answer: a. (Unless you’re pretty sure your underpants are at the studio head’s house, in which case b, then threaten to tell his wife.)

3. When you are held up to ridicule for applying sunscreen to your daughter’s bum, and you might be if you’re pretty weird, what is the wisest course of action? 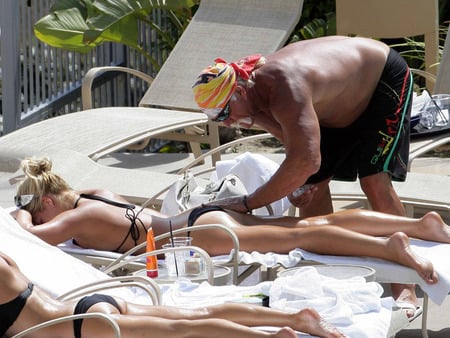 a) Have your daughter tell US magazine that touching her bum is OK because “it’s like touching an old car.”

b) Phone your daughter later and tell her that a) isn’t really helping and is in fact just as unsettling an image as the photos themselves.

4. When you are publicly ostracized for allowing a world-famous photographer to take a picture of five-eighths of your naked back, and you will be if you’re owned by Disney, what should you do?

a) calmly point out that you flash more of your flesh in a swimsuit, so what’s the big deal?

b) allow Hugh Hefner to take a picture of eight-eighths of your naked front.

Answer: “Miley, honey, why is Goofy at the front door? And why is he wearing brass knuckl– oof!”

5. When you are pulled over by the police for picking up a transvestite hooker, and you probably won’t be but Eddie Murphy was and golly it was hilarious, which of the following statements is most advisable?

a) Good evening, officer. Have you met my agent, Shalomar?

b) Out of the goodness of my heart, I’m giving this defenceless hitchhiker a ride home. (Pause for officers to laugh hysterically.) No, seriously, that’s the story I’m going with.

Answer: Honestly, at this point does it make a difference?

FILED UNDER: the unexplainable hulk