jumping for joy... and also for insanity-based reasons

Are you excited? I’m excited. We are barely 24 hours now from the big moment – the return of Tom Cruise to The Oprah Winfrey Show, where three years after his last visit a team of stout men is still endeavoring to steam-clean remnants of crazy from the fabric of Oprah’s couch.

This time, Cruise gets two whole episodes to himself. On Friday, Oprah interviews Tom at his vacation home in Colorado, where they go for a snowmobile ride, discuss his media image and – to judge from this photograph released by Oprah’s production company – engage in a high-altitude fake laugh competition. (Spoiler alert: Oprah wins.) Later, in a lighter moment, Oprah stops to feed Katie Holmes a nice biscuit through the bars of her “Mommy cage.” 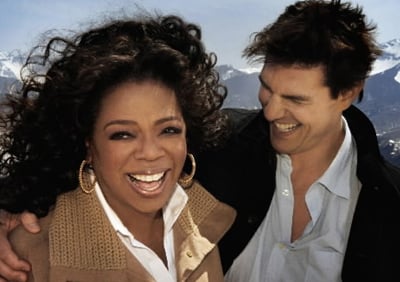 Monday’s episode, meanwhile, takes place back in Oprah’s studio, where Tom’s 25-year career in the movies will be celebrated with cupcakes, megalomania and everyone being much too polite to mention Far and Away.

(It’s been so long since we’ve heard from Tom that I’ve forgotten: does he chortle like this – “HA! HAA! Heh, heh!!” Or is it more of a “HA! Heh, heh, heh. HAA! Hwwwaaaaaaaaaa!!” If memory serves, it’s whichever one sounds more like the mad cackle of Satan himself blended with the mating call of a harbour porpoise.)

According to advanced word, Oprah does indeed ask Cruise about Scientology and the belief of Scientology leaders that Tom has been specially “chosen” to spread the word of his faith throughout the world. As one Scientologist put it not long ago: “Like Christ, he’s been criticized for his views. But future generations will realize he was right.”

The remarkable similarities between Tom Cruise and Jesus Christ don’t end there:

Christ: Known as Jesus of Nazareth.
Cruise: Grew up listening to Nazareth.

Christ: Is the Messiah.
Cruise: Has seen The Messiah.

Christ: Able to multiply loaves and fishes.
Cruise: Ditto… though he does it by sending his three personal assistants to Whole Foods in his Land Rover.

Christ: Was led into the desert where he fasted for 40 days and 40 nights.
Cruise: Once had some foie gras that was a little off.

Christ: Not gay.
Cruise: Uhh… um… did we mention the foie gras incident?

Christ: Overturned tables of moneychangers in the temple.
Cruise: One time, gave sunglasses from Oscar swag basket to his chauffeur (to borrow).

Christ: Through his life, death and resurrection, restored Man’s communion with God in the blood of the New Covenant.
Cruise: Jumped up and down on a couch after meeting a pretty girl.