All eyes were on the Queen, pretty in pink, as her Diamond Jubilee tour of Britain officially starts 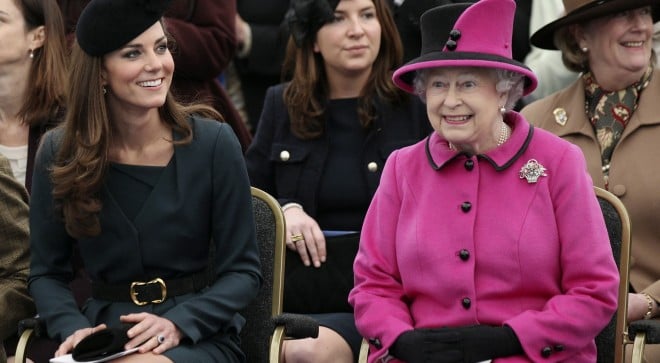 It was clear Kate was determined not to be the centre of attention from the moment the royal party arrived at St. Pancras station in London on Thursday. Her clothes were dark and unobtrusive, leaving the focus solely on Kate’s travelling companion—the Queen, who was officially starting her Diamond Jubilee tour of Britain.  Kate even wore her hair pulled back under a hat, avoiding the inevitable photo op when she battles for control of her tresses as they get whipped by the wind. That meant all attention was on the Queen, aided by her bright pink outfit, in Leicester, leaving Prince Philip in his customary back-up role and Kate chatting with local officials.

With Prince William on the far side of the world doing a search-and-rescue stint in the Falkland Islands, Kate has been undertaking one solo engagement per week, not an onerous routine when compared to the schedules of other Windsors but in keeping with the plan of very slowly, and gently, introducing her to royal life. Hence Kate and Camilla going with the Queen last week to Fortnum & Mason. Nonetheless, the visit to Leicester was a day packed with events —a fashion show here, a service at the cathedral there—and Kate accomplished two things: she got to watch the pro negotiate a uniquely regal combo of etiquette, formality and crowds, and she was able to lighten the load on the elderly couple (the Queen is 85, Philip is 90). While the sovereign chatted with church leaders near the cathedral, Philip and Kate met with outreach workers. She also chatted with her grandmother-in-law during a fashion show, something that’s not a usual event on the monarch’s schedule.

It wasn’t all formality and stuffy duty for the 30-year-old duchess. Student Becka Hunt won a royal lottery when her  shoe design was selected by Kate as the winner of a contest at De Montfort University, which has an internationally famous footwear design program. The winning suede and embroidery design, that riffed off Kate’s engagement ring, will be worn by the duchess at a future engagement. And given the elaborateness of the design, it’s unlikely to be a joint Queen-Kate engagement. 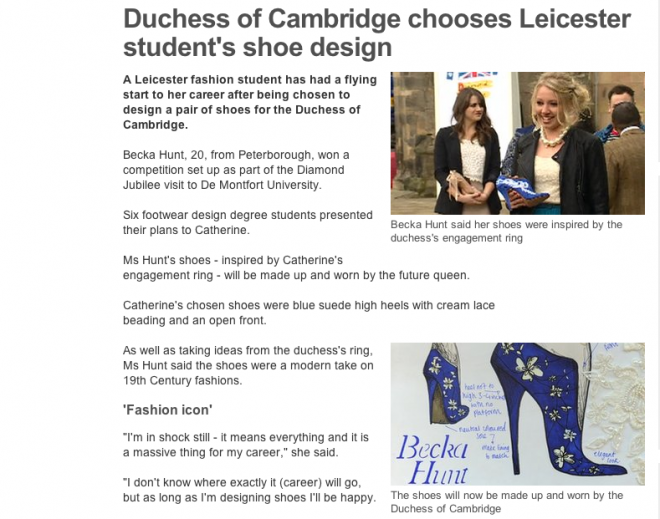