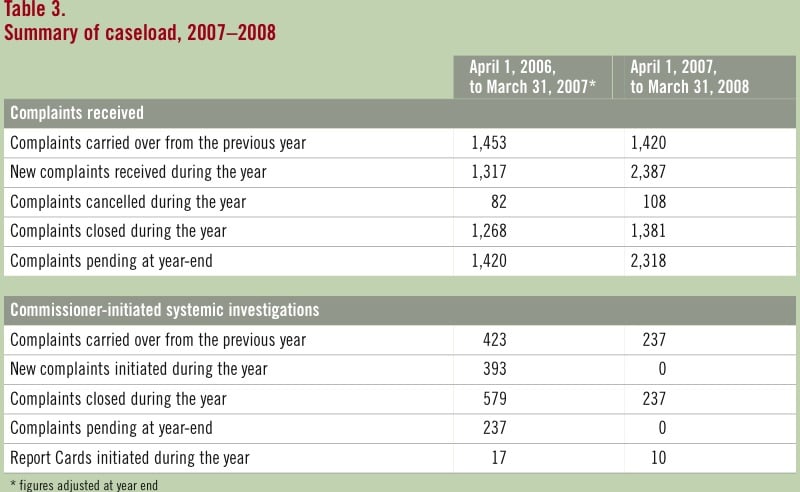 Here’s a table from Information Commissioner Robert Marleau’s new report. Note the second section, for “commissioner-initiated systemic investigations.” That’s fancy talk for “the commissioner takes matters into his own hands and tries to figure out how the government handles inquiries in general.” Note that Marleau’s predecessor, John Reid, initiated almost 400 of those in his last year as commissioner. Note also that Marleau has launched zero during his first.

Alec Castonguay at Le Devoir is, as far as I can tell, the first reporter to notice this discrepancy. It’s an odd thing, when you consider that formal complaints under the Access Act are up 80% this year over last. Two possible explanations:

(1) perhaps Marleau is simply swamped. The Tories’ Accountability Act greatly extends the number of federal agencies and organizations that are now covered by the Access Act — including Marleau’s own office, and the CBC, which accounted for about half of this year’s new complaints. (Which is to say, without the CBC finding its feet in a new access world, complaints would have been up “only” 40%.)

(2) perhaps Marleau is weirdly obsessed with changing the organization of his office and its work methods, to the exclusion — temporarily, one devoutly hopes — of actually making sure Canadians have access to information as the law requires. Frankly, a read of his report suggests this explanation is plausible. He does say, for instance, that he wants to incorporate systemic inquiries into a renewed department-by-department “report card” system. Next year. This apparently makes it OK to abandon one of his tools of inquiry while he plays with org charts.

In any case, you know how governments of every stripe sometimes complain about excessive zeal on the part of officers of parliament? This one has found no reason to complain about Robert Marleau.