Men who stare at George Clooney 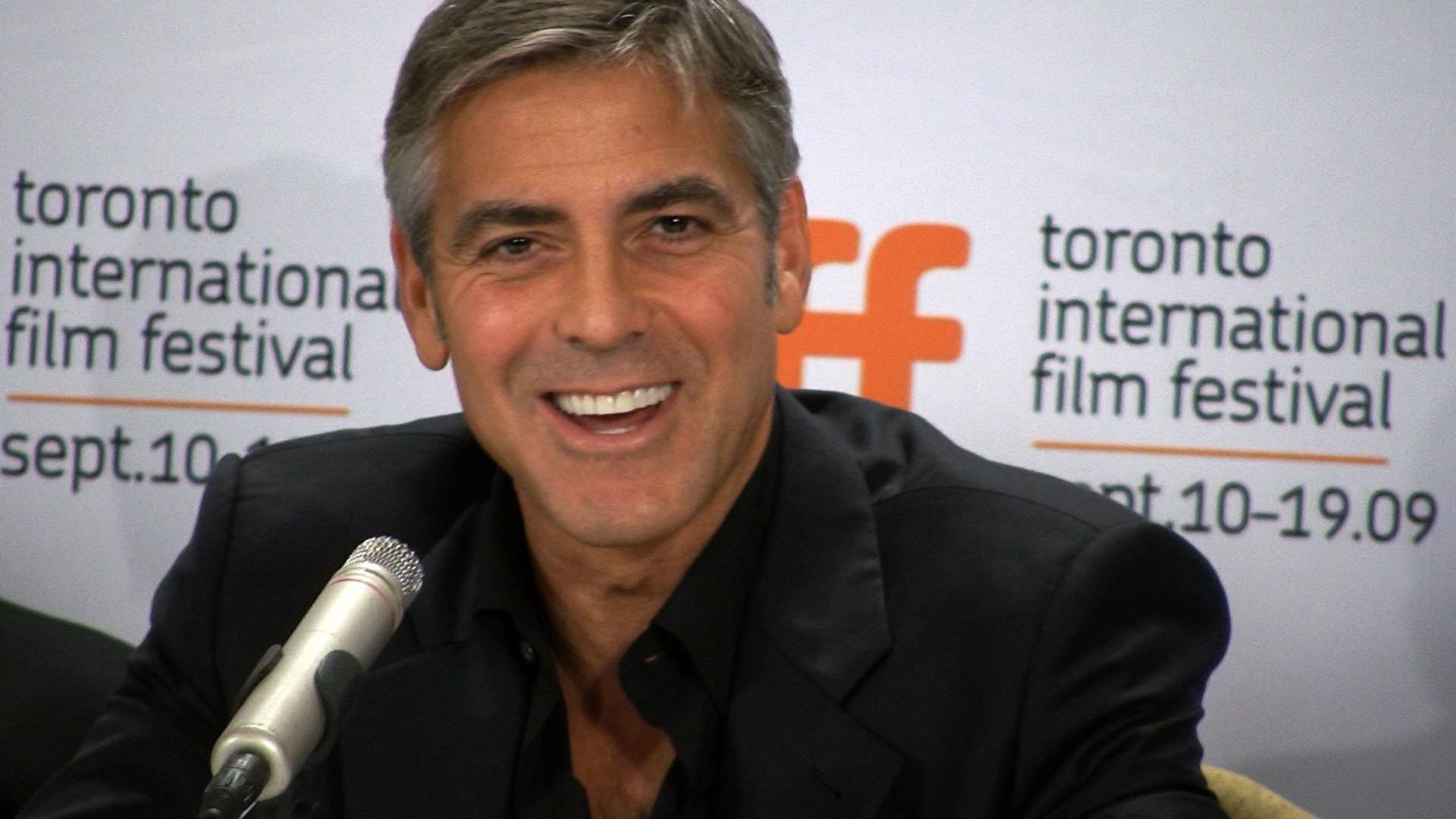 George Clooney, staring at me

Missed a whole day of blogging. Here’s my excuse. Yesterday I saw four movies, went to a George Clooney press conference and ended the night dragging my tired butt to a George Clooney party in the Glass House, a swanky modernist mansion on the Bridle Path—the millionaire’s row in Toronto’s north end. I should clarify that George and I weren’t exactly partying together. In fact, he left almost as soon as I arrived, while Jeff Bridges, his co-star in Men Who Stare at Goats, lingered late, ensconced in conversation with a young woman. And the goats stayed late—there were some cute goats in pens on the red carpet dressed in T-shirts that read “stop staring at me.” There were also young women serving drinks who wore the same T-shirts. I’m not sure which was more cruel. George wasn’t wearing the T-shirt, but he might as well have been, because he gets stared at constantly. And I have to confess I’ve been seeing far too much of George lately. The staring has to stop. This afternoon I went to another press conference at which he was the main attraction. Today’s was for Jason Reitman’s Up in the Air, which is shaping up to be the hit of the festival so far. George, meanwhile, has become TIFF’s amiable superstar mascot. We love George. We all love George, even though he won’t grant us interviews or dish about his personal life. And George loves us, because, we’re nice, but not too nice. Unlike that unruly male journalist in Venice (his previous stop), we don’t rip off our clothes at the sight of him. And at a press conference, George behaves like the perfect dinner party guest. He’s Mr. Charm, like a cool Vegas cat working the room, yet without the sleaze. It’s as if he’s gone to movie-star school and taken Debonair 101. He’s charismatic, self-deprecating and funny. If this acting thing doesn’t work out, George could do stand-up comedy without breaking a sweat. In response to an idiot journalist who asked him to create a Facebook page, he shot back: “I would rather have a prostate exam on live television by a guy with very cold hands than have a Facebook page.” Oh dear, more grist for that scurrilous gay bachelor gossip.

Men Who Stare at Goats is a goofy comedy set in Iraq about a real-life American military unit that trained in paranormal activities. Like walking through walls and becoming invisible. At the Goats press conference, someone asked Clooney where he would go if he were invisible. George mulled over the pleasures of anonymity for a moment then said, “Yeah, but how are you going to get served in a restaurant if you’re invisible.” He went on to mime an invisible man trying to order a hamburger and fries . . . I guess you had to be there.

I threw a question at George. Asked him about his habit of playing guys who are smarter than they think they are—in Goats, and previously in the Coen brothers’ O Brother Where Art thou and Burn Before Reading. He said something smart about playing the smartest guy in the room. But it wasn’t funny. And today, at the Up in the Air press conference I asked him why he suited the character Jason Reitman specifically wrote for him, as a man without purpose who is chronically unattached to anyone or anything. He dodged that one, and handed it over to Reitman, who then got almost choked up saying how grateful he was that George gave him the gift of such a tender, vulnerable performance. That wasn’t funny either. One of my colleagues is now claiming that George gave me a wave of recognition from the podium in the first press conference. But honestly, we’ve never met. So George, this thing is obviously getting out hand. People are starting to talk. Stop stalking me. Seriously.

And the movies? Oh yes, the movies. Saw three good ones yesterday: Peter Mettler’s amazing Petropolis, Solitary Man with a wonderfully seedy Michael Douglas, and the aforementioned Up in the Air—plus Drew Barrymore’s feature directing debut, Whip It, starring Canadian sweetheart Ellen Page as a roller derby queen. But I had to swear to a publicist to embargo my opinion of Whip It until after its premiere Sunday. Mum’s the word.

This morning I caught the Chris Rock documentary, Good Hair, about the multi-billion-dollar industry that caters to African-Americans trying to “relax” their locks. Another winner. Rock investigates the bizarre business of black women straightening, softening and extending their hair only to create something that men are not allowed to touch. He also goes to India to investigate the “weave” business, tracking down the dark tresses that Indians sacrifice for religious reasons, and which end up being sewn onto the heads of African American women for over $1,000 a pop.

Once again, for my ever-expanding list of personal favorites at TIFF, click on: Best of the Fest.

FILED UNDER: George Clooney Jason Reitman Men Who Stare at Goats TIFF Up In the Air