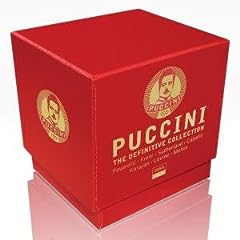 Decca is calling their new 11-CD collection “Puccini: The Definitive Collection,” but really it’s a tribute to the label’s superstar, the late Luciano Pavarotti: remastered, repackaged recordings of five Puccini operas, recorded at different times in different places, but all of them starring Pavarotti.

Of the five remastered sets, only one — the La Bohème conducted by Herbert Von Karajan — is available separately. Which is sort of too bad, because only one of the five recordings represented here, Turandot, is my very favourite for that particular piece, and I’d have preferred to get it separately. But I found the collection at L’Atelier Grigorian in Toronto for about $94; Amazon.ca has it for $84, but on backorder; one way or another it comes to less than $20 per set, which isn’t a bad deal for starting a Puccini opera collection, particularly since four of the five recordings are good, and the fifth (Tosca) is at least competent.

The recordings have all been remastered in high-resolution technology; I haven’t seen detailed comparisons of the old CD versions, but most of them were first released on CD in the ’80s, when digital remastering technology was a new and haphazard thing; it sounds to me like the Turandot, whose original CD issue came out in 1984, sounds more like it did on LP (and this was one of the greatest-sounding recordings ever made), but I don’t have that CD issue any more so I can’t say for sure. Certainly it seems like the remastering process has improved the recordings at least a little. They all come with text and English translations, of course, but no other notes except a synopsis and recording-session photos (including several that show Pavarotti without his beard!).

For those who are interested in the idea of recordings as a separate medium from stage performance — an art form in and of themselves — most of these recordings occupy an interesting time in the history of the opera recording: in the ’70s, when most of them were made, companies were making opera recordings a little less dramatic and idiomatic, a little more about sheer sound and stardom. Not a single one of these Puccini recordings was made in Italy, and only two use orchestras of actual opera houses, whereas in the ’50s and ’60s it was assumed that you wanted to record operas with real opera orchestras, idiomatic orchestras and choruses, and a cast that might perform these operas in the theatre. In the ’70s, Pavarotti in particular made many recordings where he was the only Italian cast member, that were made with pickup orchestras assembled purely for recording, and where there was no real sense of drama; the great critic Conrad L. Osborne railed against this in his article “Diary of a Cavpag Madman.”

But the first of these recordings in chronological order, the Turandot under Zubin Mehta, is one of the greatest opera recordings of all time, and an example of how this strategy can work. It was made with the London Philharmonic, an orchestra that had never played this music before; it had an English chorus that sang Italian with a slight English accent; and most of the singers had never performed these parts in their lives. Pavarotti had never sung Calaf, a dramatic tenor role that was too heavy for his basically light voice (he later sang it on stage once, but mostly he restricted himself to singing the big aria “Nessun Dorma” in concert). Montserrat Caballé, a superstar soprano, was cast in the secondary soprano role of Liù, which she rarely or possibly never sang. And for the dramatic soprano title role, the company didn’t have anyone under contract who was right for the part, so they offered the role to their superstar soprano and Pavarotti’s mentor Joan Sutherland — and she accepted, even though she usually sang light coloratura parts. There was no reason why this recording should have turned out better than other recordings with people who actually knew these parts, and yet it did. For one thing, Zubin Mehta is at his best as a conductor, extremely exciting and bringing out all the spectacular sounds of Puccini’s most large-scale, spectacular opera. But the orchestral and choral work, while very un-Italian, is just on a different, higher level than the Rome orchestras and choruses that had been on all the previous recordings of Turandot. And there’s the sound: engineered by Kenneth Wilkinson, one of the greatest engineers in the history of recording, the recording is a testament to the amazing things you can do with old-school analogue recording. It has a really big, epic sound, suggesting an orchestra and singers in a large hall yet never sounding echo-y or distant; all the details can be clearly heard without standing out in an unnatural way. The ending of Act 1, with the orchestral postlude that just keeps getting louder every time you think it’s reached its limit, is about as exciting as it can get. And though most of the singers would not be first choices for a stage performance, they’re nearly all terrific for recording purposes. Pavarotti’s “Nessun Dorma” is the first and best version he ever recorded, and Sutherland reminded listeners that she actually had a huge voice and could have been a dramatic soprano if she’d wanted to go that route. (It was also one of the few recordings she made without her husband conducting, and for that reason she sounds like she actually cares what she’s singing about.) Other recordings of Turandot may tell you what the history of this work has been in the theatre, but none of them can compare to this one as an experience. Put it on, crank up the volume, and it’s a mind-blowing two hours (even the ending, which Puccini didn’t live to write and which was cobbled together from a few sketches and lots of recycled themes from earlier in the opera, sounds pretty good given this kind of treatment).

The best-selling of these five recordings, and according to some stories the best-selling opera recording of all time, is the Karajan Bohème with the Berlin Philharmonic. Karajan chose to play this opera as a two-hour wallow in gorgeous sound: with the Berlin orchestra playing beautifully, beautiful-sounding leads (Pavarotti and Mirella Freni) and slowish tempos, the scenes don’t always have a lot of drama or momentum, but they always sound fantastic. (The recording was also made very fast, which explains some mistakes and missed entrances here and there; but they’re not very important.) The casting of Elizabeth Harwood, a somewhat shrill-sounding English soprano, as Musetta, is one of those weird casting choices that Karajan was notorious for, but otherwise it’s an excellently sung performance, and you can see why its romantic, heartwarming approach caught on with record buyers. The remastered sound is very good, though with very little of  the “stereo staging” that Decca had used in its earlier opera recordings.

Karajan, Freni and Pavarotti reunited for another best-seller in 1974 when they recorded Madame Butterfly with the Vienna Philharmonic. Karajan uses a similar approach, with waves of beautiful orchestral sound washing over everything; it doesn’t work as well, though, because this is a heavier opera and Freni, with her light voice, sometimes sounds like she’s struggling to project over the orchestra, even with the engineers helping her. Pavarotti, who should be a perfect Pinkerton (the character is a self-centered asshole who has nothing to do except sing some pretty music here and there), sounds less than his best, especially in his act 1 aria. But in a lot of the big moments, like the Act 1 love duet and the “flower duet” for Freni and mezzo Christa Ludwig, the set sounds wonderful, helped by still more excellent engineering.

The Karajan/Freni/Pavarotti trio were supposed to come together one more time to do Tosca, but it didn’t happen (it’s said that Pavarotti might have become disenchanted with Karajan after he rejected him from a Butterfly movie as being too fat, replacing him with skinny Placido Domingo). Instead Freni and Pavarotti recorded the opera in London under Nicola Rescigno, an Italian conductor best known for accompanying Maria Callas on some of her recitals. The orchestra was the National Philharmonic, an orchestra that did not exist: it was created especially for recordings by a bunch of players from various London orchestras, and they had to be literally taught most of the music at every recording session (they were great players, you understand, but they were sight-reading, and they sound like they don’t really grasp the dramatic function of the notes they’re playing). The sound, also by Kenneth Wilkinson, is very pretty, but there’s absolutely nothing even remotely dramatic about this performance; everybody sounds like they’re singing notes, not playing characters in life-or-death situations. If you want Freni in this part, get her re-recording of it with Domingo under Giuseppe Sinopoli; she was older by then and sounds it, but that sounds like an actual performance of Tosca rather than a very long recital.

Finally there’s one more Freni/Pavarotti recording, for which we jump ahead to the early ’90s, when they recorded Puccini’s first big hit, Manon Lescaut, uner James Levine and the Metropolitan Opera Orchestra. They’re both too old, even in terms of pure sound, to play a student and a young coquette, but Pavarotti is on good behaviour in this recording, and their experience, along with their real Italian style (a rarity by the early ’90s, when there were few good Italian singers), and Levine’s fine conducting, makes for a very enjoyable recording. One of the few young Italian opera superstars, Cecilia Bartoli, makes a cameo, and there’s a welcome appearance by a very old and distinguished Italian baritone, Giuseppe Taddei, as a lecherous old man.