Scott Reid: As Earthlings everywhere cheered the Niners’ triumph over Green Bay last week, the rise of K-fever reached near epidemic levels. Squillions hopped aboard the Kaepernick bandwagon (wave to me – I’m in the Montana jersey near the window). What a day! In addition to breaking the single-game record for rushing by a quarterback, outdueling Aaron “The Consensus Greatest QB In The Game” Rodgers and winning the Golden Globe in the category of Best Snapback Not Worn By L’il Wayne….

…Kaepernick managed to dazzle America with his mythmaking instincts. The SF QB took the unusual step of releasing a letter he had written to himself in Grade Four. In it, the pre-tatted Kaepernick…. mused that he would one day ‘…go to the pro’s and play on the Niners.’ And lo and behold… here he is. Journalists and fans alike heralded the precognitive prowess of the only read-option milk monitor in middle school and cooed at his youthful determination. However, such predictive powers are not as uncommon as you might think. The intrepid researchers at Feschuk Reid World Inc. have been working hard to uncover comparable examples and have quickly surfaced the following letters written by recognizable celebrities to themselves: 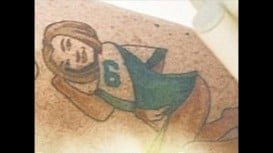 Rex Ryan: “One day I hope to be a lap-banded loud mouth who likes to think about quarterback Mark Sanchez and my wife. Barefoot. Together. In a tattoo, even.” 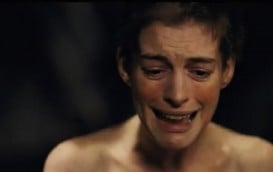 Anne Hathaway: “When I grow up, I’ll be a princess. And people will love me and I’ll win an Oscar. And then, very quickly, the whole big sparkly world will grow tired of my phony horseshit and want for me to fall from something high.” 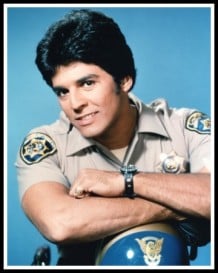 Scott Feschuk: “I’ll have the sexiest, sonafabitch partner you ever up and downed. His name will also be Scott. And he will have immense power over women like Lauren Tannehill.”

So there you have it – dreams do come true. And not just for young Colin Kaepernick. Although he’s still going to have a pretty good day. Pick: San Francisco.

Scott Feschuk: Listen, as a guy who works with words for a living, I’m here to tell you that you’ve got a lucrative future ahead of you in ghostwriting – specifically, ghostwriting the diaries of 11-year-old girls. OOOOOO!!!! COLIN K. LOOKED AT ME TODAY IN STUDY HALL. SQUEEEEEEEEEAL!!! And for the record, it’s getting to be embarrassing having to go to business meetings with you all covered in glitter from your incessant scrap-booking. Grow a pair, and not boobies this time. In other news, after some terrific games last weekend, the football gods will surely afflict us with at least one stinker this Sunday – and I think it’s going to involve the Atlanta Falcons being ground into a thick paste, forced through a fine mesh sieve and reconstituted as a hearty and satisfying jerky (except for Matt Ryan, who’ll taste bland). So let’s turn our attention to a more pressing question: how did the Denver Broncos manage to lose last week? Some say it was Peyton Manning’s arm having the same consistency as a pool noodle (he didn’t through downfield once the entire game). Some say it was coach John Fox being more conservative than Grover Norquist.

But the real culprits were the team’s cheerleaders. Yes, I know it was cold. Yes, I know that extremities were at risk. But you know what? Extremities are the whole point of cheerleaders! YOU GOTTA GUT IT OUT, LADIES. Who exactly are you inspiring to victory when you’re dressed like the guy who sold me my Christmas tree.

Feschuk: This is hard for me to admit but, inspired by recent events, I feel the need to come clean: Scott Reid does not exist. He never existed. I invented him to fill a dark void in my life and also to seem slightly less fat and abrasive by comparison. Oh, sure, you may think you’ve seen Scott Reid on TV talking about sports or politics, but that was actually a lifelike puppet I fashioned from burlap, foam and a tremendous amount of pale. What can I say? We all have needs.

One thing that bugs me about this whole Manti Te’o thing: people are coming down so hard on him – but no one ever criticizes Tim Tebow for claiming to have had a relationship with the forward pass. Guys, I swear I had the ability to throw one… but it died! BE UPLIFTED BY MY TRAGIC TRAGEDY. Meanwhile, in actual news: Please, Bill Belichick – spare us from the Harbaugh Bowl! The Niners are going to crush the Falcons and if somehow the Ravens get a win, we’re facing two long weeks of montages of Jimmy and Johnny’s childhood photographs and endless anecdotes about what precocious scamps they were and whatnot. I’d rather watch Wes Welker clip his fingernails. Heck, I’d rather watch Tom Brady clip Wes Welker’s fingernails. The only thing that could be more boring than the Harbaugh Bowl would be Matt Ryan doing anything ever. Pick: New England.

Reid: Ok. Three things. First, Scott Reid DOES exist. I AM real.  And HERE’s what I look like:

Second of all, I’m not all that pale. For example, I’ve got quite a bit more pigment these days than Sammy Sosa:

Third and most important, you’re very wrong. The HarBowl would be an enormous gift to fans of both football and fratricide.  I am inclined to believe the Niners would win that matchup. But the real contest would be waged between siblings who shelter NFL-sized egos and immense insecurities.

I, for one, find it very easy to imagine that little brother John has some gi-normous scores to settle. Does this look like a man who would be a caring and supportive big brother?

At the end of the HarBowl there would be two teams, one winner and half a red spot covered in teeth and shoelaces where the losing H brother used to stand. Don’t be dumb and bet on John. And don’t bet on him to beat Belichick. It doesn’t take a gridiron genius to figure out that if you shut down Rice, you shut down the Ravens. Flacco? Pfft! Pick: New England.