After a series of public meetings along the pipeline route, the State Department held a final public meeting on the proposed Keystone XL pipeline today in Washington, DC.

The large hall at the Ronald Reagan Building on Pennsylvania Avenue seemed about evenly divided between opponents of the proposed pipeline and supporters, mostly members of two unions that support the project: the Laborer’s International Union of America, which represents construction workers, and the United Association of Plumbers and Pipefitters. 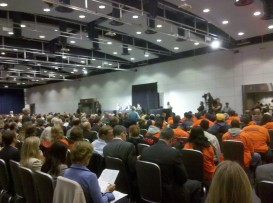 During the portion of the event that I attended, individuals took turns making three minute-long comments to a panel of State Dept. representatives. The presentations were often heartfelt, and the applause raucous, but generally the process was calm. As expected, the arguments boiled down to environmental concerns versus jobs. The issue of replacing middle eastern oil with Canadian oil came up, as did pipeline safety concerns. But environment v jobs was the bottom line.

Along 14th Street, the LiUNA members staged a demonstration in favor of the pipeline. One chant was “Queremos Trabajo!” (We want work.) 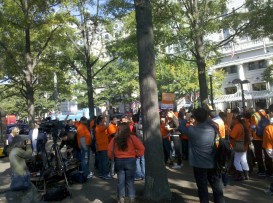 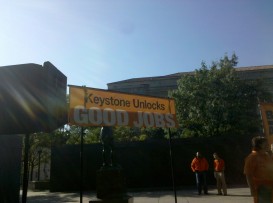 Across, the street, an echo of the “Occupy Wall Street” movement had set up an “Occupy DC”encampment on Freedom Plaza. (A LiUNA spokesman said that they support that movement, underscoring the extent to which Keystone XL presents a strange issue for them because it puts them opposite many of the progressive groups they usually stand. But in a country where 1.2 million construction workers are unemployed, jobs are the paramount issue for the union, the spokesman told me.)

I recently wrote in Maclean’s that environmental groups have changed their focus from the official State Department review process, which is expected to wind up by the end of the year — to pressuring the Obama re-election campaign directly, by threatening to withdraw their financial and organizational support.

The anti-pipeline movement has gained a lot of steam lately — and there seems to me more pressure on the administration than ever before. But Keystone XL is still hardly a household word. Given the difficult job situation in the US, and the State Department’s TransCanada-friendly Final Environmental Impact Statement, and Obama’s repeated willingness to back down from some environmental rules on account of their economic impacts, it’s hard to see Obama nixing this project and giving Republicans another “job-killer” slogan to throw at him.

“We are in such a difficult economic climate that anything that has the word jobs attached to it becomes kryptonite … Republicans have been beating the President over the head with ‘job-killing regulations’ and ‘job-killing taxes.’ At the end of the day, the sense I get from the Obama campaign is that they are thinking about how to target independent voters.”