Opening Weekend: Cutting to the chase in 'Date Night' and 'The Wild Hunt' 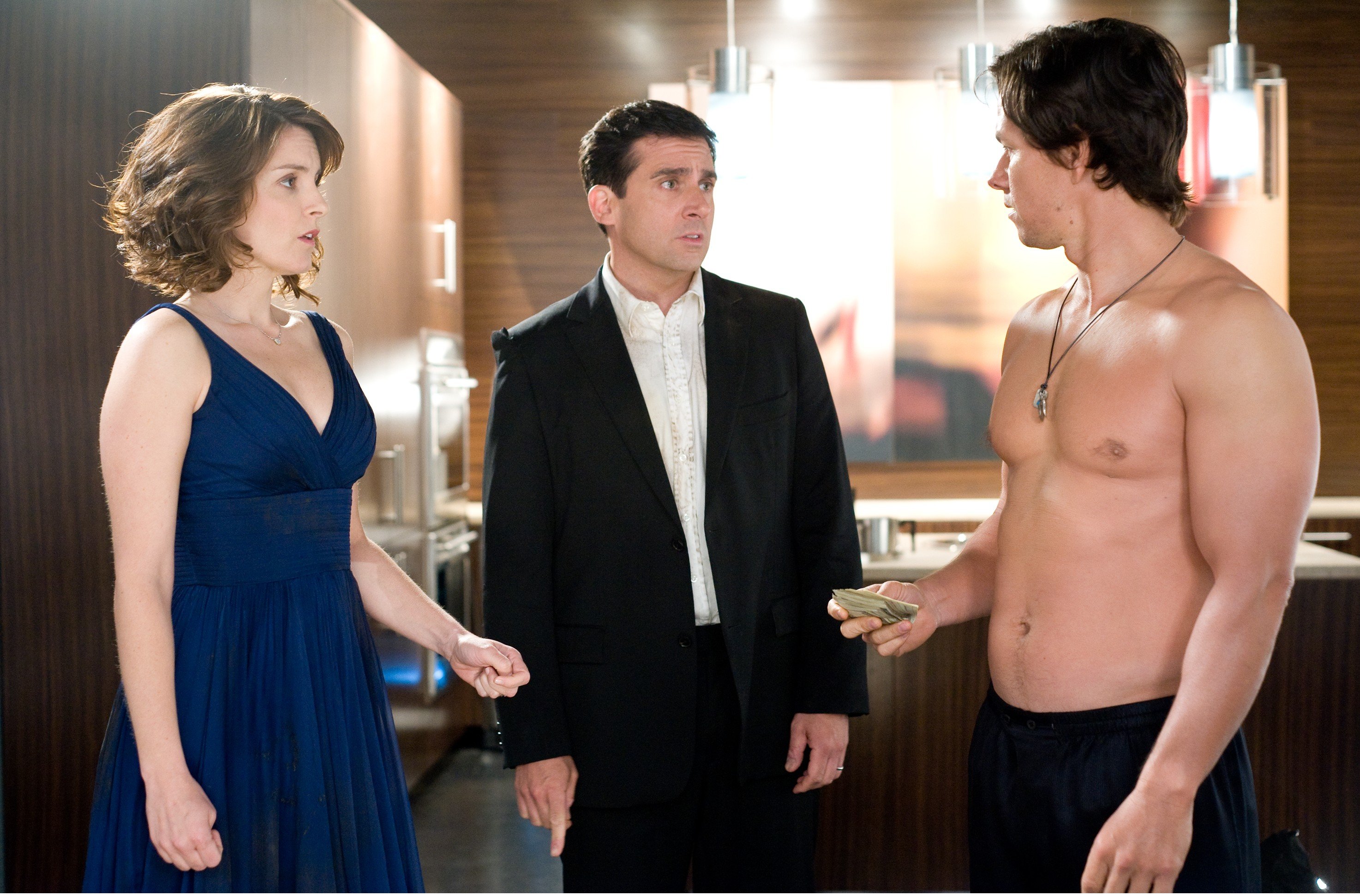 There are three movies by Canadian directors opening this weekend: Date Night, The Wild Hunt and A Shine of Rainbows. I haven’t had a chance to preview A Shine of Rainbows yet—it’s a family picture directed by Vic Sarin. But I have seen the other two. You could say they’re both chase movies, though they’re from opposite ends of the spectrum. Date Night belongs to that distinct studio genre know as “action comedy,” and is directed by Montreal-born expatriate Shawn Levy (Night at the Museum), now one of Hollywood’s most bankable directors. The Wild Hunt is a low-budget feature debut from Montrealer Alexandre Franchi, who quit a banking career to  become a filmmaker. I’d like to be able recommend Franchi’s gritty little Canadian film over the middle-of-the-road, crowd-pleasing Hollywood blockbuster. But in all good conscience I can’t. The Wild Hunt is a bold, ambitious, uncompromising first feature that pursues an original and eccentric idea to a disturbing finale. Job well done. But I found it a maddening ordeal to watch. Date Night is a silly formula comedy with its own share of frustrations, plus a high quotient of banality, but it’s a lot of fun to see Tina Fey and Steve Carell play husband and wife. For an interview with director director Shawn Levy, check out my piece on Date Night in last week’s magazine: A date? It’s really a ménage à trois. Meanwhile, some details on the two pictures:

This is as close as Shawn Levy has come to making a personal film. He dreamt up the idea while on a date night with his wife, at the same restaurant they go to whenever they escape for an evening away from the kids—just like Tina Fey and Steve Carell in the movie. To that extent, though Levy commissioned the script, it was inspired by his own experience, and its domestic moments have a telling ring of authenticity. Up to a point. When the action devolves into an extended car chase, its resemblance to actual human behavior evaporates. Date Night tries to be two things at once: a relatively shrewd relationship comedy and a silly action farce. Those hybrid elements don’t seem designed for the same audience (unless the action is supposed to be for the guys and the relationship stuff for the girls). As for me, I liked the dialogue scenes between the two lead actors, who have genuine chemistry, but got bored during the action sequences, despite the novelty of a car chase that involves conjoined vehicles with locked bumpers. I guess I wanted it to be more of a chick flick.

The one good thing about Date Night, perhaps the only good thing,  is the pairing of Tina Fey and Steve Carell. Their marriage is convincing from the first few frames. These well-matched comedy stars—both attractive but not too attractive, both smart but not smart-assed—look like they are made for each other. Without being told as much, we believe this couple’s love is deep and real, even if they don’t have time to enjoy it.  Date Night is not a romcom where the romance is in jeopardy. Just buried. It’s about an over-worked Everycouple who make a misguided attempt to carve out some quality time.

Phil (Carell) drags Claire (Fey) from their New Jersey suburb to Manhattan for a night out in the city’s hottest restaurant. They show up without a reservation. (What were they thinking? They’ve barely left home and already the long march of implausibility begins.) When a couple called the Tripplehorns fails to show, Phil decides to be the man. He grabs the reservation, claiming that they are the Tripplehorns. As it turns out, the Tripplehorns are dangerous people to impersonate. Phil and Claire are hauled into a back alley, beaten up, and questioned about a mysterious missing flash drive. An antic chase ensues involving drug dealers, corrupt cops—and a black ops security expert (Mark Wahlberg), who’s a flirtatious former client of Claire, a real estate agent. The scenes with the ludicrously buffed Wahlberg —interrupted while enjoying a tryst in his luxury condo—are funny. Favorite line, from Carell: “Why do you need muscles on your shoulders?”

So is Date Night a decent date movie? Well, I guess, in the sense that it’s a harmless romp with a few laughs and a couple of likeable stars. But for every crumb of wit, the script serves up a banquet of trite plot and goofy slapstick. Whenever the dialogue takes over, and we watch Fey and Carell click as romantic duo, it’s tempting to imagine these TV stars as a big screen couple with a future—a contemporary answer to Nick and Nora in The Thin Man. They deserve a better movie than Date Night. 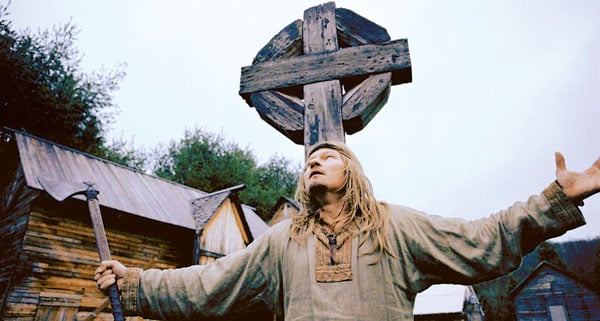 Mark A. Krupa as a Viking role player in 'The Wild Hunt'

Alexandre Franchi’s feature debut has won quite a bit of acclaim. It was awarded best Canadian first feature when it premiered at the Toronto International Film Festival last fall. It has since landed on Canada’s Top Ten and been voted the audience prize at the Slamdance Festival. You can see why. This film brimming with conviction. And it pulls off an unlikely stunt—carving an intense, authentic, ultimately harrowing drama out of what first seems like a potentially risible world of medieval make-believe. The story is set amid the elaborate and very real fantasy world of LARP—Live Action Role playing. Our hero is Erik (Ricky Mabe), who goes hunting for his mercurial girlfriend, Evelyn (Tiio Horn), who has deserted him to frolic in a vast woodland re-enactment battle of Vikings vs. Celts. Erik’s brother, Bjorn (Mark A. Krupa) is one of the lead re-enactors. Erik begs him to ditch this escapist fantasy and come home to help care for their sick father. Instead, Bjorn offers to help him win back his girl—persuading him to get into costume and join the game.

For the first half of the film, we’re led to share the protagonist’s vie, that the whole notion of medieval role-playing is a crock, a preposterous charade conducted with foam weapons and portentous dialogue. But as night falls and spirits rise, the players stray from their scripted roles, and the fake violence turns real. The bloody Viking sagas take a visceral hold on some of the players, and the veneer of modern civilization evaporates. What transpires has been called “Lord of the Rings meets Lord of the Flies,” and the analogy is apt. Without giving too much away, viewers should be warned that, in the third act, the gently absurdist tone gives way to brutally graphic violence.

The drama has an almost documentary level of authenticity, due to the fact that Franchi filmed in the pseudo-medieval village of Duché de Bicolline, a role-playing venue in the woods near Shawinigan, Quebec. The extras include a number of real-life re-enactors. But the focus on verisimilitude also becomes a dramatic liability. Franchi seems so close to his subject, and so enmeshed in the Viking and Celtic lore, that he neglects his characters, who tend to be as thin as their medieval roles. The brash over-acting of the role players, as plausible as it may be, still comes across as over-acting. The yelling gets tedious. The moments where the players drop out of character are such a relief, you crave more of them. And the key players remain inscrutable. That includes the pretty object of our hero’s romantic quest—the pouting and mostly silent Evelyn—and his power-tripping rival (Trevor Hayes), whose game role is the dark shaman Murtagh.

One could defend the film by saying it works all too well. In my aversion to this role-playing realm, maybe I just identified too closely with the protagonist. Hey, I can’t argue with that. I just wanted to get the hell out of there.