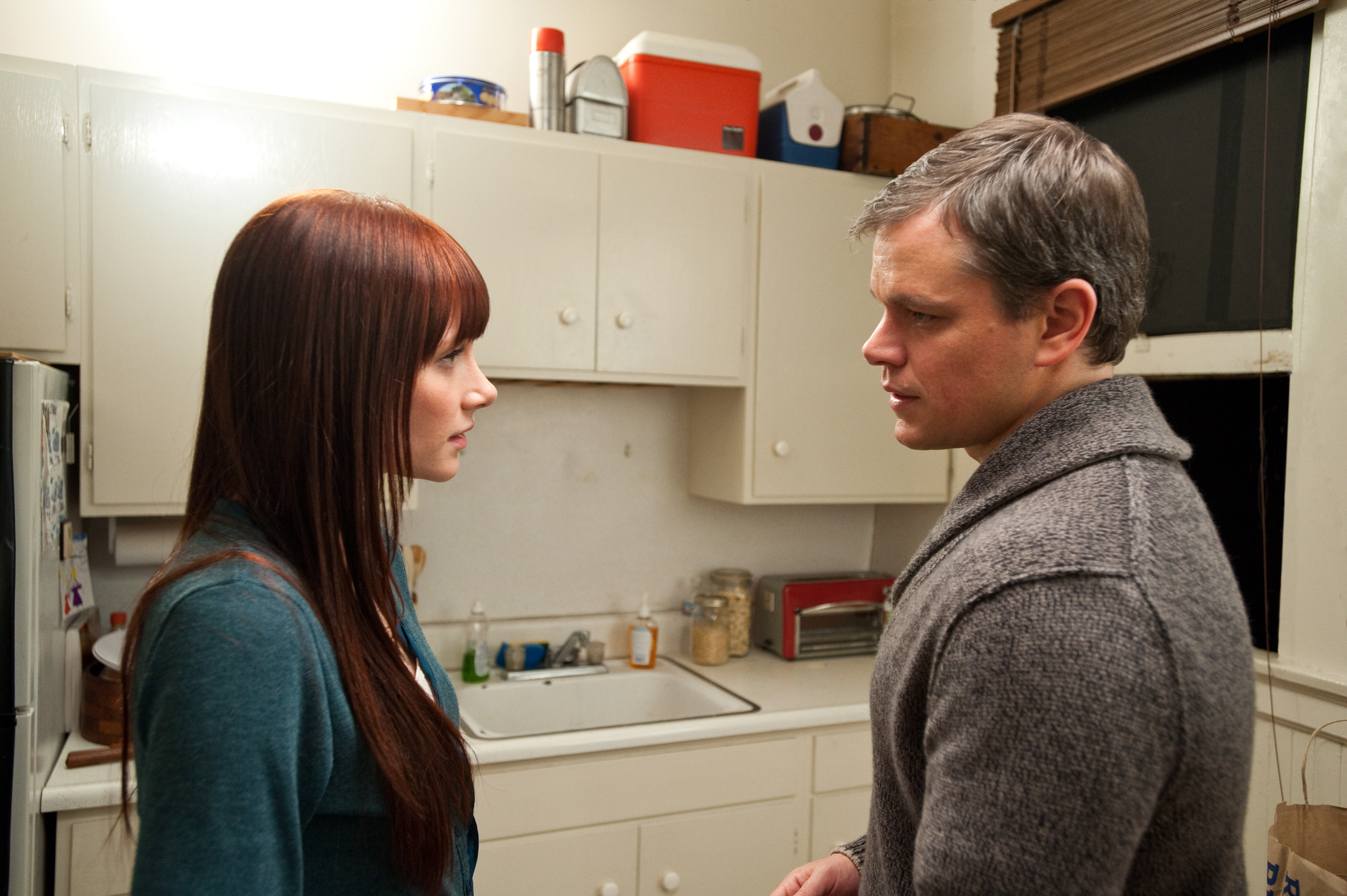 Hallowe’en is still two weeks away, but there’s a lot of weird stuff going on at the movies this weekend. Matt Damon sees dead people in Hereafter, Helen Mirren fires a machine gun in RED, Robert De Niro goes mano-a-mano with Edward Norton in Stone, and John Lennon discovers his mother in Nowhere Boy. My favorite of these three movies happens to be the smallest—Nowhere Boy, which dramatizes a narrow but crucial slice of John Lennon’s life as troubled teen, just before the formation of the Beatles, when he’s torn between the aunt who raised him and the mother who abandoned him. The other films are loaded with Oscar-pedigree talent, but they’re a mixed bag:

Hereafter is a well-crafted curiosity. In this ruminative drama about life beyond the grave, Clint Eastwood flexes some metaphysical muscle and shows that, at the age of 80, an old dog can still learn some new tricks. The story, scripted by Peter Morgan (The Queen), interweaves stories of three unrelated characters in three countries, whose fates inevitably mesh in the final act—an American psychic trying to hide his powers from the world (Matt Damon), a French anchorwoman who survives a near-death experience in a tsunami (Cécile De France), and an English boy trying to contact his twin brother from beyond the grave. Whether or not this three-ply narrative works is debatable, but the film is highly watchable, luxuriously composed, and (aside from the spectacular scene of the tsunami) distinguished by its subdued tone, which marks a radical departure from the melodramatic torque of Eastwood’s recent movies. Next to RED, which exploits the novelty of geezers kicking ass, the thoughtful modesty of Hereafter, a movie by the granddad of ass-kicking geezers, seems refreshingly mature, if unsatisfying. For more on Eastwood’s movie, go to my story in this week’s magazine: Matt Damon sees dead people. 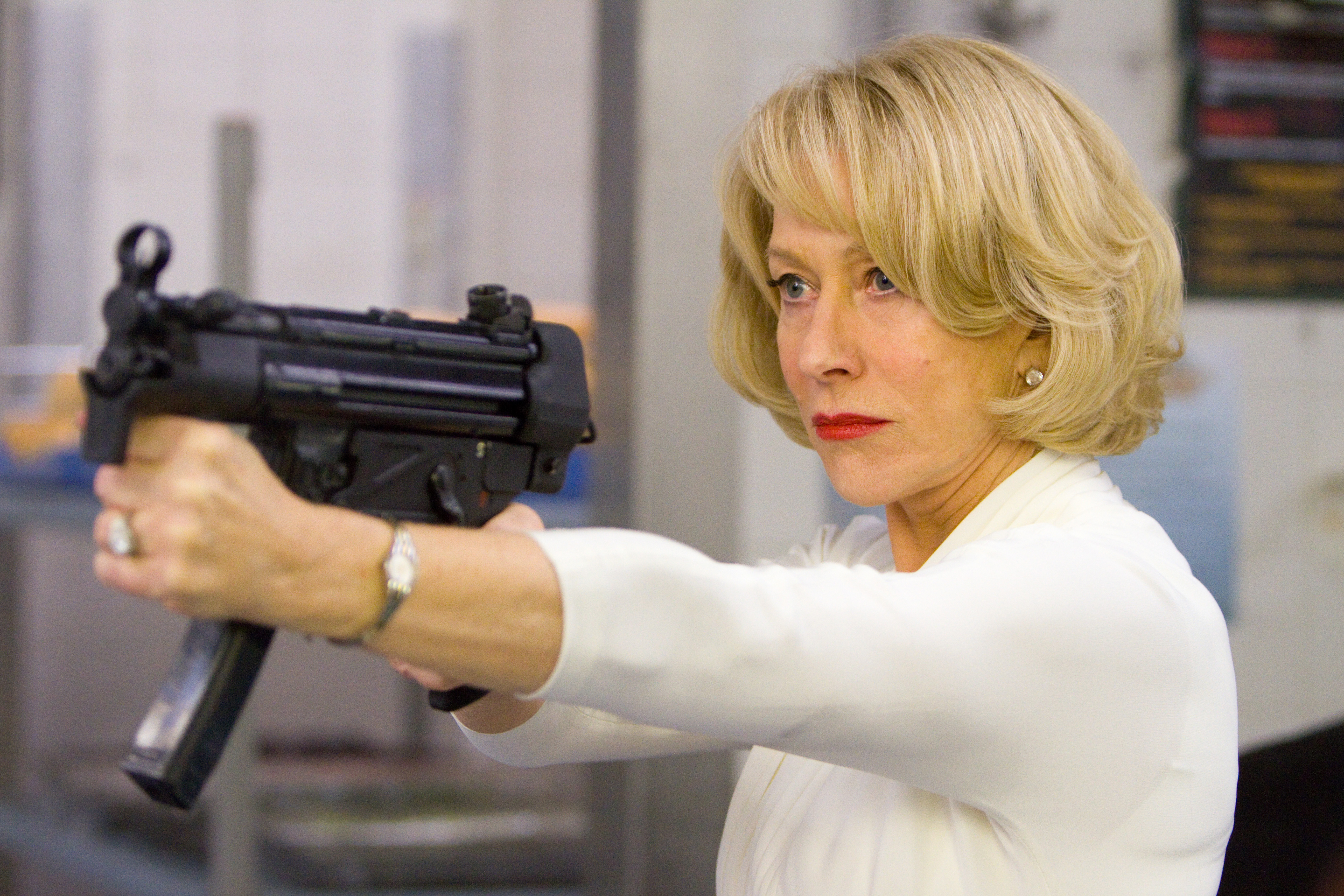 Directed by Robert Schwentke (Flightplan, The Time Traveller’s Wife), Red is an action comedy about an eccentric crew of CIA retirees, and while there’s no question that it “works,” at least on its own terms, it struck me as an extravagant waste of time. Based on a cult graphic novel from DC Comics (is there no end to cult graphic novels?), it’s about a retired group of elite secret agents who are forced out of retirement when their former employer, the CIA, targets them for assassination. Apparently, they know too much. Led by a hard-core operative named Frank (Bruce Willis), they get the band back together, go on the run, and set about exposing a massive conspiracy. Along for the ride is an innocent civilian (Mary Louise Parker), who is taken hostage by the amorous Frank in a screwball scenario that resembles the one in Knight and Day.

For the movie’s troupe of serious actors (Helen Mirren, John Malkovich, Morgan Freeman, Mary Louise Parker, Rebecca Pidgeon) Red‘s blockbuster sandbox seems an excuse to goof off. They appear to be having a blast slumming with Bruce, chewing scenery and brandishing machine guns. Helen Mirren devours her role as an aging Mata Hari with evident relish—when you’re too old to be a Bond girl, Red must seem heaven-sent. And she’s by far the best thing in the movie. But the over-amped conceit of grumpy old spies soon wears thin. Malkovich is especially grating as a bug-eyed paranoiac. After over-acting his way through Secretariat as a preposterous Québécois speaking bogus French, this once lethal actor seems in danger of debasing his currency with compulsive mugging. And although his performance is beyond the pale, he’s emblematic of a syndrome that affects the entire cast. Each actor seems lost in his or her own movie, and they seem to be having more fun than the audience. 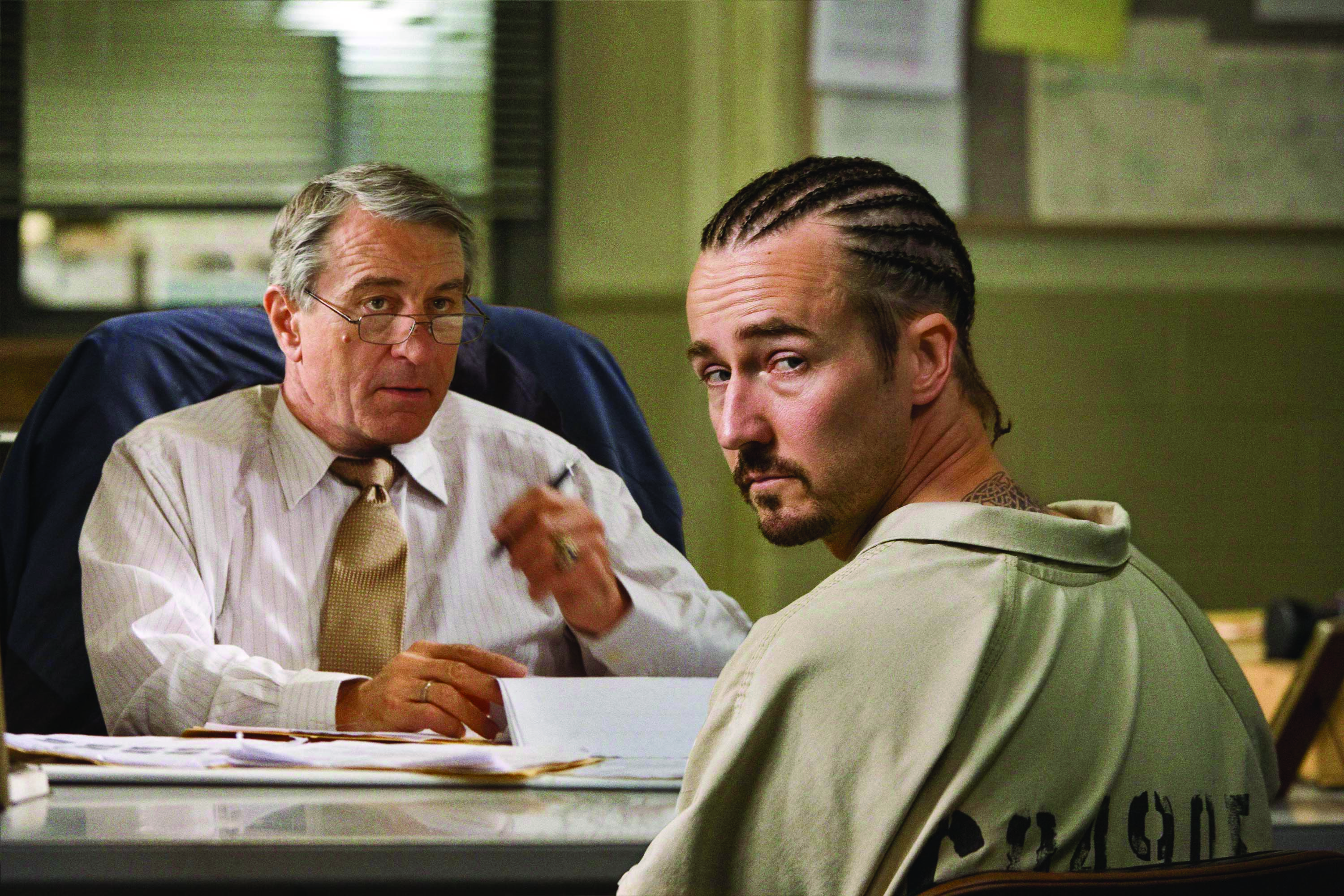 With some movies you find yourself watching the performances, as a kind of spectator sport, rather than losing yourself in the story. That’s the case with Stone, in which Robert De Niro and Edward Norton face off in an Olympian acting duel, with De Niro playing the straightman and Norton driving the action as the snaky con who messes with his head. Jack Mabry (De Niro) is a Detroit parole officer who’s looking forward to retirement when he takes one final case—that of an arsonist named Gerald “Stone” Creeson, who’s serving time for his role in a fire that killed his grandparents. The heart of the drama lies in a series of interviews that Jack conducts with Stone in the prison to determine if he deserves parole. Norton has the showier role. Running through a declension of vocal intonations and hairstyles, his chameleon-like performance keeps us guessing, and has strong echoes of his role as a devious convict in Primal Fear. Another case of a con running a con; and an actor playing an actor. The plot hinges on Stone’s wife—a sexpot played by a red-hot Milla Jovovich—who stalks the parole officer and tries to influence his decision by testing his fidelity to his wife (Frances Conroy of  Six Feet Under).

The screenplay comes from Angus MacLaughlin, who made such a strong impression with Junebug. But MacLaughlin has spent most of his career in theatre, and this film has the hermetic tone of a stage adaptation, although it’s not. The plausibility of Jack’s singular role as a one-man parole board begs disbelief. And under the plodding direction of John Curran (The Painted Veil), the scenario feels schematic. That said, the showdown between De Niro and Norton has its pleasures, as does the sizzling turn by Jovovich (The Fifth Element), who comes across as a European answer of Courtney Love, and gives De Niro a real run for his money. 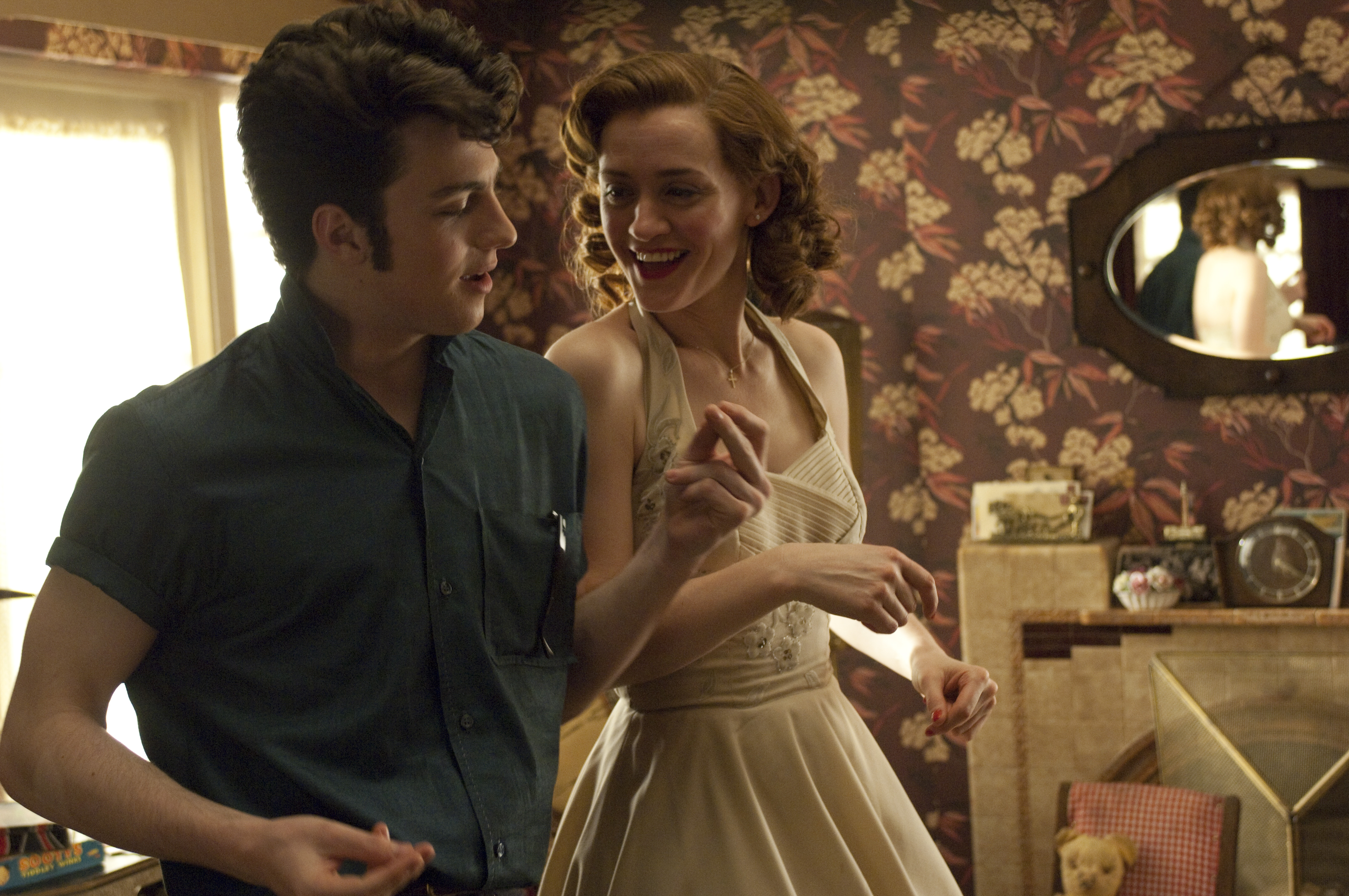 Aaron Johnson as John Lennon and Anne-Marie Duff as his mother, Julia, in 'Nowhere Boy'

Movies about dead music icons make me nervous. Whether it’s Gary Busey doing Buddy Holly, Jamie Foxx channeling Ray Charles, or Joaquin Phoenix mimicking Johnny Cash, no matter how convincing the impersonation, the counterfeit nature of it is always a bit off-putting: it’s watching a cover band. So I came to Nowhere Boy with some skepticism. But I was pleasantly surprised. It helps, perhaps, that the film is not a bio-pic and portrays the pre-iconic John Lennon, before he became a Beatle. Rather than serving up a diminished version of him, it magnifies a small but intensely formative episode in his life. And Aaron Johnson (Kick Ass), the British actor who portrays the teenage Lennon, captures his spirit with an incendiary mix of insolence, intelligence and wounded vulnerability.

Abandoned by his mother when he was five, Lennon was raised in Liverpool by his aunt and uncle. The movie picks up his life story shortly before the death of Uncle George, portrayed as a fun-loving fan of radio comedy whose sense of humour seems to have rubbed off on John, who is 15 at the time. George’s widow, Aunt Mimi (Kristin Scott Thomas), is a strict, thoroughly repressed Spartan who sees any emotion as a sign of weakness, refusing even to mourn the death of her own husband. John has never met his real mother, and when his cousin offers to introduce him to her, he’s shocked to learn she lives just a mile away. Julia (Anne-Marie Duff) turns out to be the polar opposite to Mimi, a free-spirited redhead with a musical ear who’s overjoyed to reconnect with her son. What then ensues is a giddy romance, tinged with Oedipal overtones, as mother and son make up for lost time. She introduces him to blues and jazz and general wildness, awakening his talent. As John begins hurtling toward his destiny as a rock’n’roll rebel, Aunt Mimi is mortified, feeling enraged by his betrayal and resentful of his newfound freedom. A kind of vicious love triangle takes shape as John is torn between his mother and his aunt, a conflict that’s finally resolved only to have John devastated by Julia’s sudden death. Meanwhile, we see the future Beatle coming of age as he discovers Screaming Jay Hawkins, forms a band, and meets a talented young kid named Paul McCartney (Thomas Brodie Sangster).

Making her feature debut, Sam Taylor Wood directs with a keen eye and a sharp ear for dialogue, letting the characters drive the story. The unsentimental script comes from Matt Greenhalgh—who wrote Control, the 2007 movie about Joy Division singer Ian Curtis—and it has a ring of authenticity. The sparring women are perhaps too firmly entrenched in their respective stereotypes—the lady and the tramp—but Duff and Kristin Scott Thomas are both engaging. Johnson has a more than passing resemblance to Lennon, but what’s more significant is that he nails his attitude. He makes us believe. As for Sangster, in the McCartney role he does a good job of upstaging the cocky Lennon with understated confidence, setting the template for a contentious relationship. He doesn’t look much like Paul, but maybe that’s just as well.