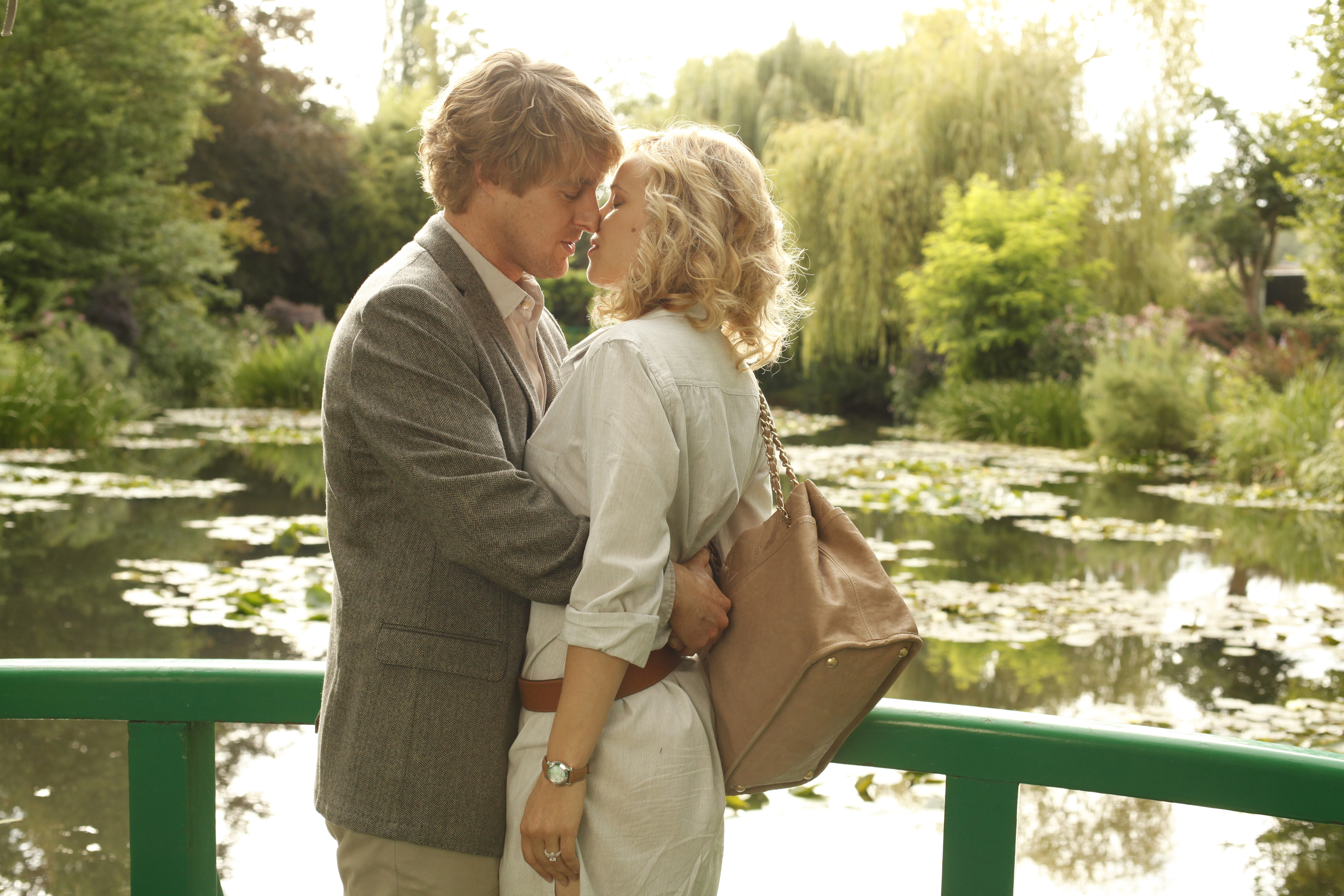 Owen Wilson and Rachel McAdams in 'Midnight in Paris'

Something for everyone this weekend: a Woody Allen comedy, a comic book blockbuster, and a semi-precious gem of Montreal noir. But exercise caution. Actors may be smaller than they appear. Take the photograph above, which is misleading. It would suggest that Owen Wilson and Rachel McAdams, the adorable stars of Wedding Crashers, are reunited in another romantic comedy. Well, Woody Allen’s Midnight in Paris is a romantic comedy, with Wilson and McAdams starring as an engaged American couple vacationing in the City of Light. But they’re clearly mismatched from the start, and McAdams’ role—as a shallow, shrewish conservative—is much smaller and less sympathetic than Wilson’s. Canada’s sweetheart works hard to bring  nuance and detail to what is, in the end, a thankless part. It’s yet another instance of her talent being better than her material. Which points to a broader trend: actors being vastly overqualified for the movies they end up in. Look at this weekend’s blockbuster sequel: X-Men First Class. The best thing about the movie is the first-class cast, which includes Michael Fassbender (Hunger), James McEvoy (The Last King of Scotland) and Jennifer Lawrence (A Winter’s Bone).  They do some really fine work here.  But going to an X-Men movie for the character acting is like buying Playboy for the articles. In Hollywood movies these days, it’s pearls before swine everywhere you look. I mean, will Johnny Depp ever desert that damn pirate ship?

Midnight in Paris and X-Men: First Class are both broadly entertaining, crowd-pleasing confections, though each is less that the sum of its performances. Good Neighbours, a Canadian indie film, is a a modest chamber piece, but it’s tautly directed by Jacob Tierney (The Trotsky), with trio of compelling performances by Canadian actors Jacob Baruchel, Scott Speedman and Emily Hampshire. It succeeds admirably on its own terms. Details on all three movies . . . 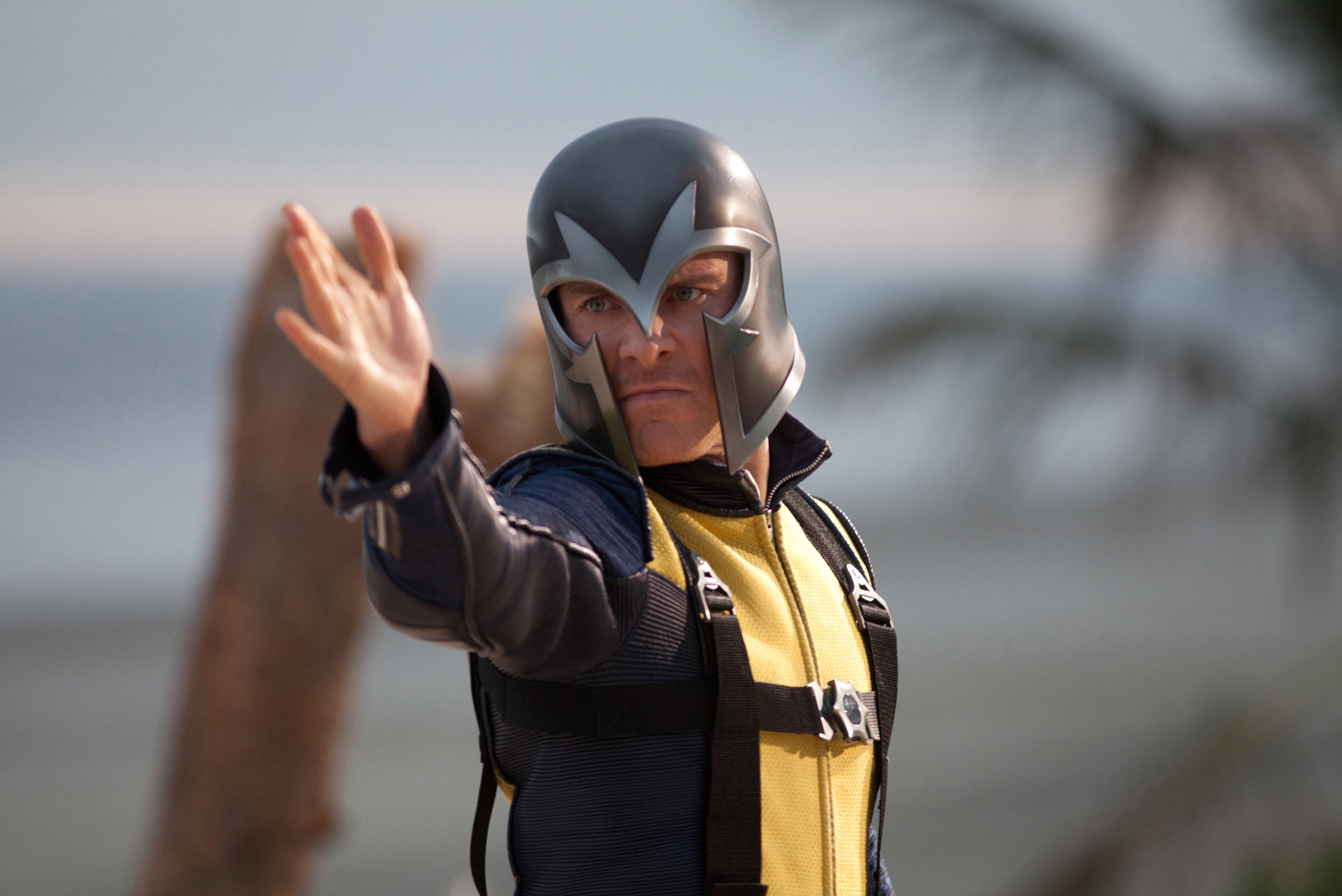 I’m not a big fan of the X-Men franchise, though I have to admit this one is a cut above the rest. It’s an origins prequel, showing how the X-Men (and women) came to be. So like the Star Trek reboot and the Bond reboot, Casino Royale, it has a fresh energy and a certain edge that takes the franchise to a new level. I enjoyed the first half of the film. Michael Fassbender, who plays the nascent Magneto, is one of those actors who can make any scene crackle with tension.  He’s a magnetic actor. One senses that he’s slumming in this role, yet jacking himself up to a level of stardom that will allow him to do more interesting work. As if to say: Hollywood, take notice! This is  your next A-list leading man. (On that level playing a superhero becomes a strategy for forging a super-powered career. Anyone who’s anyone in this biz has a franchise. Robert Downey Jr., the Smartest Guy in the Room, has two.)

As the future Professor X, the laser-blue-eyed James McEvoy brings a sly wit to every line and gesture. In the role of Raven, Jennifer Lawrence just seems to be warming up for some Blanchett-like tour de force in a movie we haven’t seen yet. A campy Kevin Bacon makes a meal of the scenery as Sebastian Shaw, a Dr. Evil-like megalomaniac. And there’s a certain retro pleasure in watching the Barbarella-like January Jones as his bimbo slave, ice queen Emma Frost. The story? It has the various mutants converging, as a Harry Potter-like class of CIA trainees with magic powers,  just as Shaw is plotting to trick the U.S. and the Soviets into nuclear war during the Cuban Missile Crisis. Clips of J.F.K. are intercut with the comic-book shenanigans. The movie’s wit is undercut by an earnest sentimentality around the mutant-is-beautiful minority status of its heroes. I lost interest somewhere in the third act, when the dramatic tension lagged, and the ensemble of pithy character acting gave way to tedious action and special effects. But as X-Men movies go, this one has a lot to recommend it by virtue of the acting alone.

It’s shaping up to be Allen’s most successful movie in years. Competing against The Hangover Part II, Midnight in Paris opened in limited release in the U.S. with a box-office haul of $96,000 per screen, Allen’s best limited debut ever. And in early May it was warmly received when it premiered as the opening night gala at the Cannes Film Festival, which is where I saw it. I didn’t love it, but found it amusing and lovely to look at. For a movie about artistic ambition and intellectual glamour, Midnight in Paris is incredibly facile, yet willfully so, as Allen serves up his Disney World rendering of French café society in the 1920s. The city is Allen’s biggest star. Right from the opening montage, a postcard-pretty gallery of scenic clichés, Allen blithely milks our affection and nostalgia for a place so perfect it can exist only in the mind, or in the movies.

If you’ll forgive me plagiarizing my own coverage, here’s an edited version of  what I wrote about Midnight in Paris from Cannes:

Allen’s 44nd movie, his fifth to open festival, follows a similar tack to Vicky Cristina Barcelona: it’s another  valentine of auteur tourism, about naive Americans falling into foreign hands, though its characters lack the depth (and fireworks) of Barcelona.  With its unabashed francophilia, it could have been made for Cannes, and who knows, maybe it was. Midnight in Paris is, quite proudly, a mere bagatelle, a lightly satirical conjuring of a Parisian golden age thick with famous American expats, set in the context of a crumbling 2010 marriage between two well-heeled American tourists, Gil (Wilson) and Inez (McAdams). Time travel makes it possible.

Wilson’s naturally disingenuous, slightly stammering delivery makes him an effortless Allen surrogate: Woody as a young, laconic blond. And from start to finish, his frisky performance breathes life into an archly contrived script. McAdams, freshly blond herself, has a habit of being consistently better than her material, and this is no exception. As Gil’s nagging fiancée, she’s cast against type, playing a Republican who dotes on a pedantic know-it-all played by Michael Sheen. Gil is a familiar Allen protagonist, a frustrated novelist who worships the past and is aching to escape the hackdom of Hollywood screenwriting success. He deserts Inez and her friends each each night to walk the streets of Paris—where at the stroke of midnight he’s magically spirited away into the émigré salon-monde of the ’20s. He mingles with the likes of Hemingway, Fitzgerald, Dali, Buñuel, Picasso and Gertrude Stein, and falls for a dreamy Marion Cotillard, the next best thing to Edith Piaf. Aside from the abrasive chemistry between Wilson and McAdams, the movie’s pleasure lies in its greatest hits parade of coy cameo impersonations, from Alison Pill’s Zelda Fitzgerald to Adrien Brody’s Salvador Dali. Around every burnished corner of this closeted period film is a fresh surprise. Welcome to Woody Tussaud’s House of Wax.

Allen has become a casting virtuoso. He can get Oscar winners like Brody, Cotillard and Katherine Bates to fill out minor roles. But at the press conference he positively gushed about landing Owen Wilson: “Owen is the opposite of me. I’m very Manhattan, very East Coast. Owen is very West Coast. He personifies that in his whole demeanour. He’s relaxed and he’s a beach lover and this gives the character an enormous dimension that I could never have given it, nor could I have written it for another actor.”

I asked Allen if Wilson’s rom-com romance with McAdams in Wedding Crashers had anything to do with him pairing them again. “I’d seen Rachel in a film with Owen years ago,” he said, as if the title escaped him, “and I thought she was sensational. She was beautiful and sexy and funny and a wonderful actress, and I wanted to work with her. And the opportunity came up. I didn’t like the fact that they had worked together before. That was a negative to me. I figured people will think, ‘Oh, it’s Owen and Rachel again.’ But I felt there’s nothing I could do about it. They’re both great and I want them both. I wanted to get Rachel at any cost, and I was very lucky to get Owen. I’ve always been lucky with casting. The truth in casting is to hire great people, let them do what they do, don’t interfere with them too much, and then when they’re great, take credit for it. I’ve done this for many years and it works like a charm.” 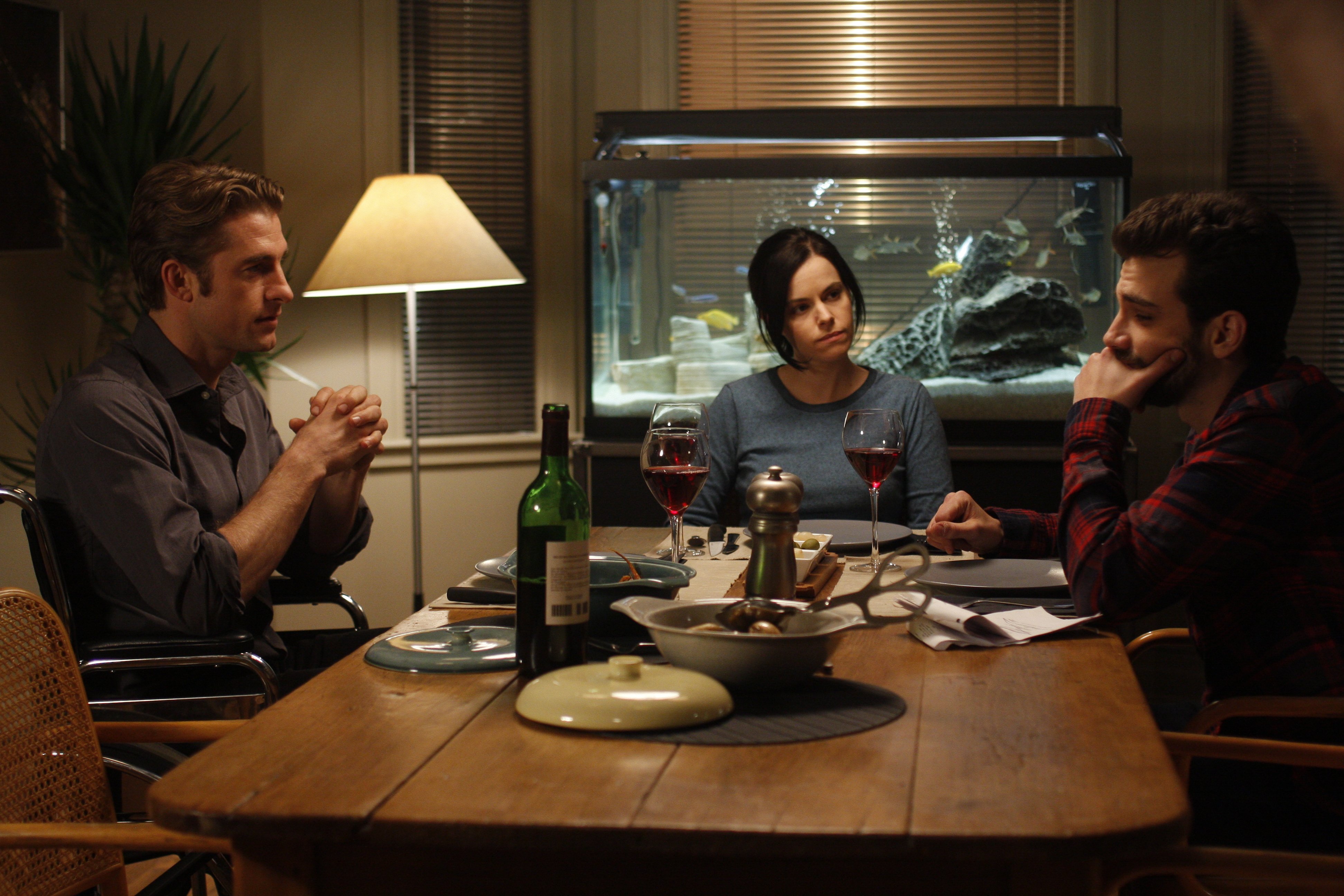 Here Montreal writer-director Jacob Tierney reunites with pal Jay Baruchel, who starred in Tierney’s The Trotsky, one of the most unlikely Canadian comedies every created.  This is another adventure in Anglo Montreal, but a very different kind of movie. The Trotsky, about a high-school kid who believed he was the reincarnation of the iconic revolutionary, was a serious-minded farce that stretched an improbable conceit into a sprawling epic. Good Neighbours is a tight, finely controlled drama that could work as a stage play. In fact, it’s adapted from Chère voisine, a novel by Quebecois writer Chrystine Brouillet. Tierney has moved the location from Quebec City to Montreal’s west end suburb of NDG, and the story takes place against the backdrop of the 1995 referendum.  Baruchel, playing another variation of the jumpy, self-effacing naif that seems to come naturally to him, moves into a Montreal apartment, and becomes drawn into the lives of his mysterious neighbours, a trickster-like Spencer (Scott Speedman) who has been confined to a wheelchair since a car accident killed his wife, and Louise (Emily Hampshire) a moody waitress with a thing for cats. There have been some rapes and killings in the neighbourhood, and we feel a rising dread that the perpetrator might might be one of the principals. Tierney is toying with Rear Window territory here, and although the story isn’t on that level, engaging performances keep us guessing. The film is superbly crafted, with veteran cinematographer Guy Dufaux composing a coherent palette of dark, rich interiors. And although the Quebec politics just lurk in the background, like another kind of anonymous killer, the character of Anglo Montreal, and all the insecurity it embodies, is conjured up with a rare specificity.