Opening Weekend: No Strings Attached, Incendies, The Company Men, The Way Back

Reitman and Villeneuve are both Canadian—but from different planets 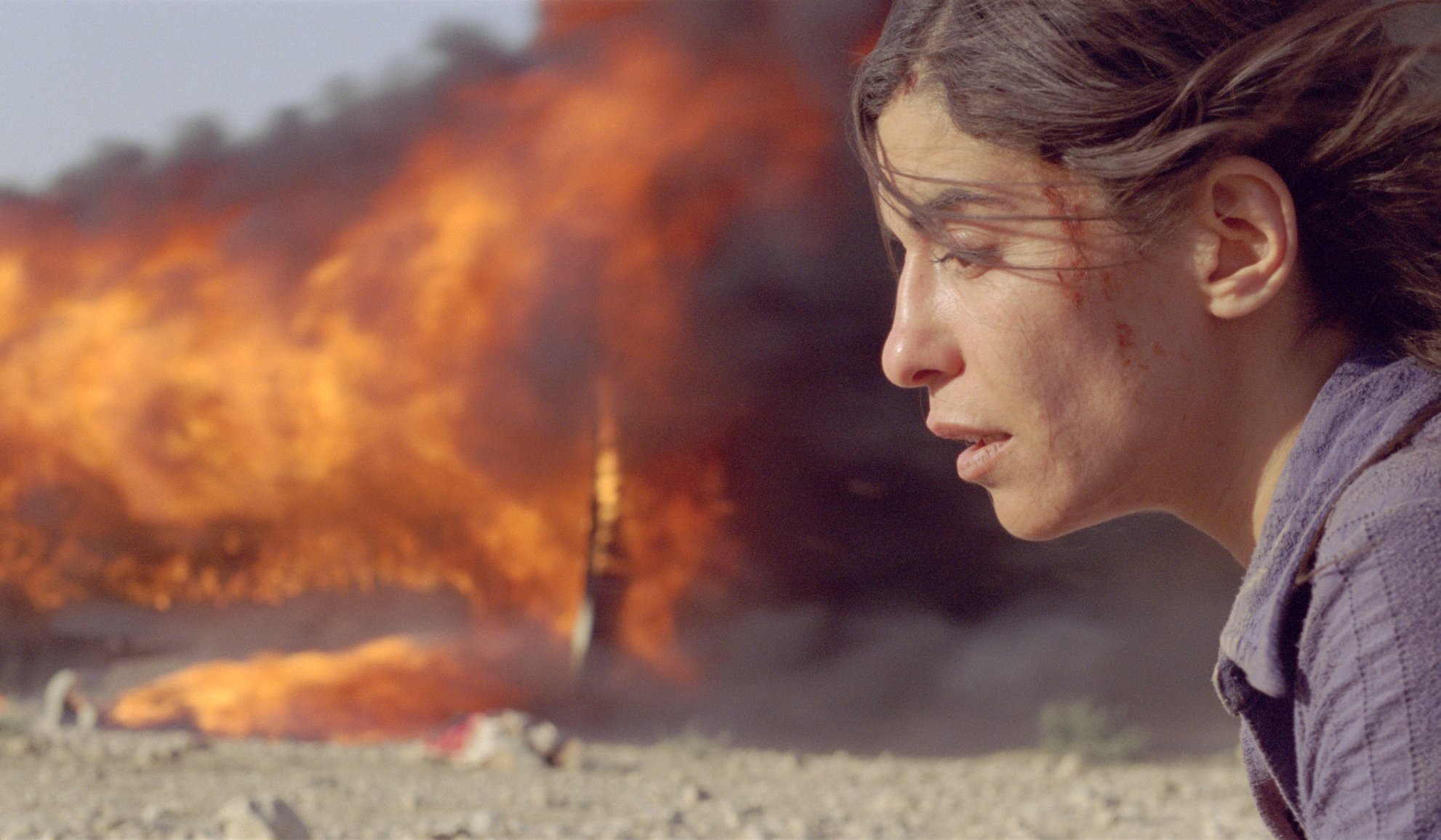 There’s a profound discrepancy in the quality of movies these days, between the calibre of the acting and the calibre of the scripts. Film actors just seem to get better all the time; it’s hard to find an unnatural performance. But so often good actors are hemmed in by contrived scripts and formulaic direction. That’s the case with Ivan Reitman’s new romantic comedy, No Strings Attached. Ashton Kutcher looks right at home in this glossy vehicle, but Natalie Portman and a dream team of supporting players seem grossly overqualified. While they eke out gem-like performances, the movie almost gets in the way.

Also opening this week is The Company Men. It’s a fine piece of ensemble acting that elicits unlikely sympathy for the plight of laid-off executives. A novel premise: pity the man who loses his Porsche. But the sharp grain of the drama is betrayed by the romantic gloss of the ending, which undermines everything the actors have been working to achieve. The movie is still worth seeing, it wouldn’t lose much if you waited to catch it on video. The Way Back, on the other hand,  has the kind of spectacular vistas that demand to be seen on the wide screen. Directed by Australia’s Peter Weir, it’s a survival epic about prisoners crossing a vast landscape after escaping a Siberian Gulag. Some may find it a slog, but I’m a sucker for these kinds of expeditionary ordeals. (I’ll elaborate on The Way Back below; and for more on The Company Men, go to my piece in this week’s magazine: Feeling the pain of rich alpha males.)

Ivan Reitman is not the only Canadian director with a new movie out. While Reitman’s Hollywood romcom opens “everywhere” this weekend, Incendies by Quebec’s Denis Villeneuve, already a hit in his home province, begins a staggered release with openings in Toronto and Vancouver. But Reitman and Villeneuve might as well be from different planets. And Incendies is one of those rare films that fires successfully on all cylinders. Although it’s adapted from a play, the script never seems stagy. Villeneuve scales the precipice of high tragedy without sliding into melodrama. He directs with a keen eye for both visual poetry and stark realism. And the acting is uniformly superb.

It was just announced that Incendies has made the Oscars’ short list of nine films in the foreign-language category, and we’ll find out Tuesday whether or not it will snag a nomination. It should. It’s not only the most powerful Canadian film of the past year—which the Toronto Film Critics Association recognized last week by giving it the Rogers Best Canadian Film Award—it holds its own against other intense foreign language fare such as Biutiful and Of Gods and Men. (There was understandable outrage when the Academy failed to include Of Gods and Men on its short list, while finding room for Algeria’s Outside the Law, a more lurid tale of French-Algerian strife. While including some titles we’ve never heard of, the Academy also snubbed Cannes Palme d’Or Winner Uncle Boonmee Who Can Recall His Past Lives.)  For more on Incendies, go to my recent piece in Maclean’s, which includes an interview with Villeneuve: Oscar buzz for a Canadian director.

As for Ivan Reitman’s new romantic comedy, as much as I’m happy watching anything starring Natalie Portman, any recommendation from me would have to come with strings attached. Sure, if you want to shut off your brain, snuggle up with Natalie and Ashton, and take the laughs where you can find them, you may want to write it off as a guilty pleasure. But the pleasure is intermittent. And besides, I have to keep reminding that myself that, while I see movies for free, others don’t. 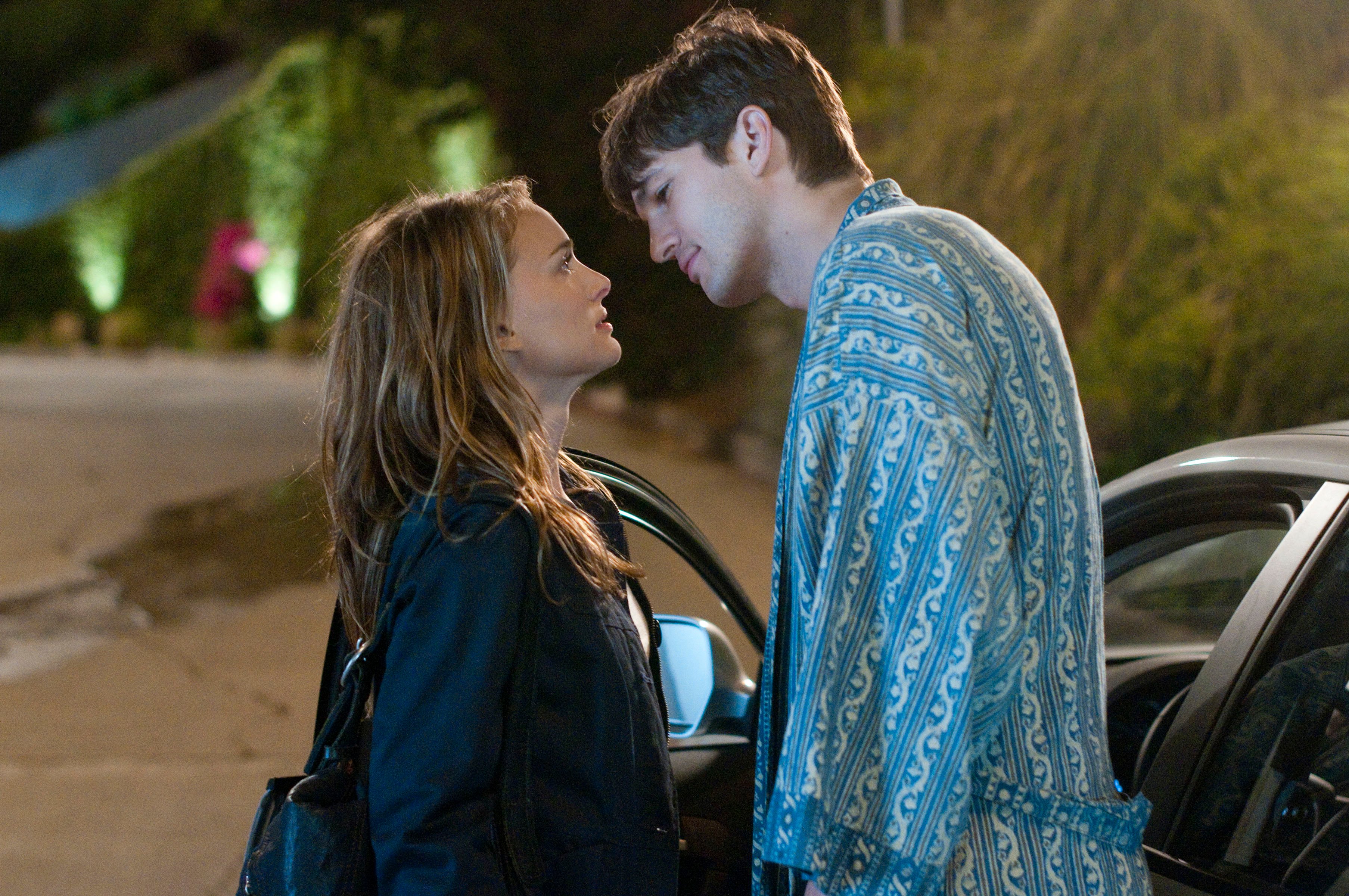 Natalie Portman and Ashton Kutcher in 'No Strings Attached'

In the past few years, Ivan Reitman has kept busy as a producer, putting his weight behind his son Jason’s Up in the Air, and Atom Egoyan’s Chloe. Both were sophisticated dramas, grown-up stuff far removed from the high-concept studio comedies that Reitman is famous for. Now with No Strings Attached, he directs his first movie since casting Uma Thurman in My Super Ex-Girlfriend (2006). But while it’s R-rated, and involves no cartoon-like special effects, No Strings is not as sophisticated, grown-up or even credible as we might wish.

The R-rated romcom is rare, something we don’t see that often outside the gross-out genre, although we did see one just recently with Love and Other Drugs, starring Jake Gyllenhaal and Anne Hathaway. In fact, the premise of No Strings, is pretty close to that of Love and Other Drugs. This is another story of a guy who falls in love with a girl who wants him only for sex and has a deep fear of emotional commitment.

The conceit, of course, is that it’s reverses the usual male-female stereotype. And as the hero’s buddies are quick to point out, it’s the ultimate male fantasy: meeting a woman who wants unadulterated sex, and nothing in return. No sweet-talking. No spooning. No flowers on Valentine’s Day. And no jealousy if competing sexual objects loom into view. There’s nothing wrong with the premise per se. Every full-fledged romantic comedy needs a hook, a mighty obstacle that has to be overcome. As the movie’s twentysomething screenwriter, Elizabeth Meriwether, has pointed out, there’s something modern about “a love story that starts with a kiss instead of ending with one.”

For the two characters in question, the sex-buddy arrangement makes some sense. Emma (Portman) is an overworked ER doctor whose insane shifts allow her no room for a life, and Adam (Kutcher), a TV floor director, is wary of commitment after being shocked to find his ex-girlfriend is dating his father (Kevin Kline), a former TV star with a prescription for medical marijuana who’s a few tokes past his prime. But Adam is the one who caves first, and starts demanding emotional commitment. And as he tries to break through Emma’s defenses, we know that she secretly wants it just as much as he does; she’s in denial. It’s a simple story courtship arc—how do you win her heart, now that you’ve won her body, especially when she’s calling the shots?

Both Portman and Kutcher are easy to watch, and they display a natural chemistry in a couple of frisky sex scenes. (Though his nudity clause seems looser than hers—and given that Portman is the Oscar-level actress and Kutcher is the lightweight hunk, that imbalance seems part of the film’s role reversal.) The leads, meanwhile, are flanked by some strong supporting players, including the wonderfully off-kilter Greta Gerwig (Greenberg), who plays Emma’s best friend; Lake Bell, who harbours a crush on Adam as a neurotic associate producer on the teen musical TV series where they work as crew members; and Kline, who makes a meal of his one-note role as the narcissistic dad.

What’s frustrating about the film is that all its actors seem cramped by Reitman’s slick, claustrophobic direction. A fairly simple romcom premise has been tarted up like an ice-cream sundae, right up to the cherry-on-top epilogues that litter the closing credits. The comedy is so over-produced, it leaves little room for spontaneity. And in this Apatow Age, that just won’t do. Virtually every scene seems calculated to punch a gag, or underscore a stereotype—and the stereotypes include a rainbow coalition of gay and racial clichés that are awfully old, despite the screenwriter’s credentials as a hip young female playwright from New York. Even when scenes draw a laugh, they seem inauthentic. When Adam crashes a get-together of women (and a token fat gay guy) commiserating over their in-sync menstrual cycles, he offers them a mix CD of songs about bleeding. Sure it’s a funny gag, the super-sensitive guy coming up with a period playlist, a menstrual mix. Cute. But like so many clever comic moments in the movie, it doesn’t ring true. The story is not only set in Los Angeles; it seems saturated with a myopic phoniness that is the city’s showbiz life-blood. I couldn’t believe half of what was happening in No Strings Attached, and felt it was not the fault of the actors. Especially Portman. She’s is as good as she could possibly be in this candied confection. I just hope it doesn’t hurt her chances in winning Best Actress for Black Swan. 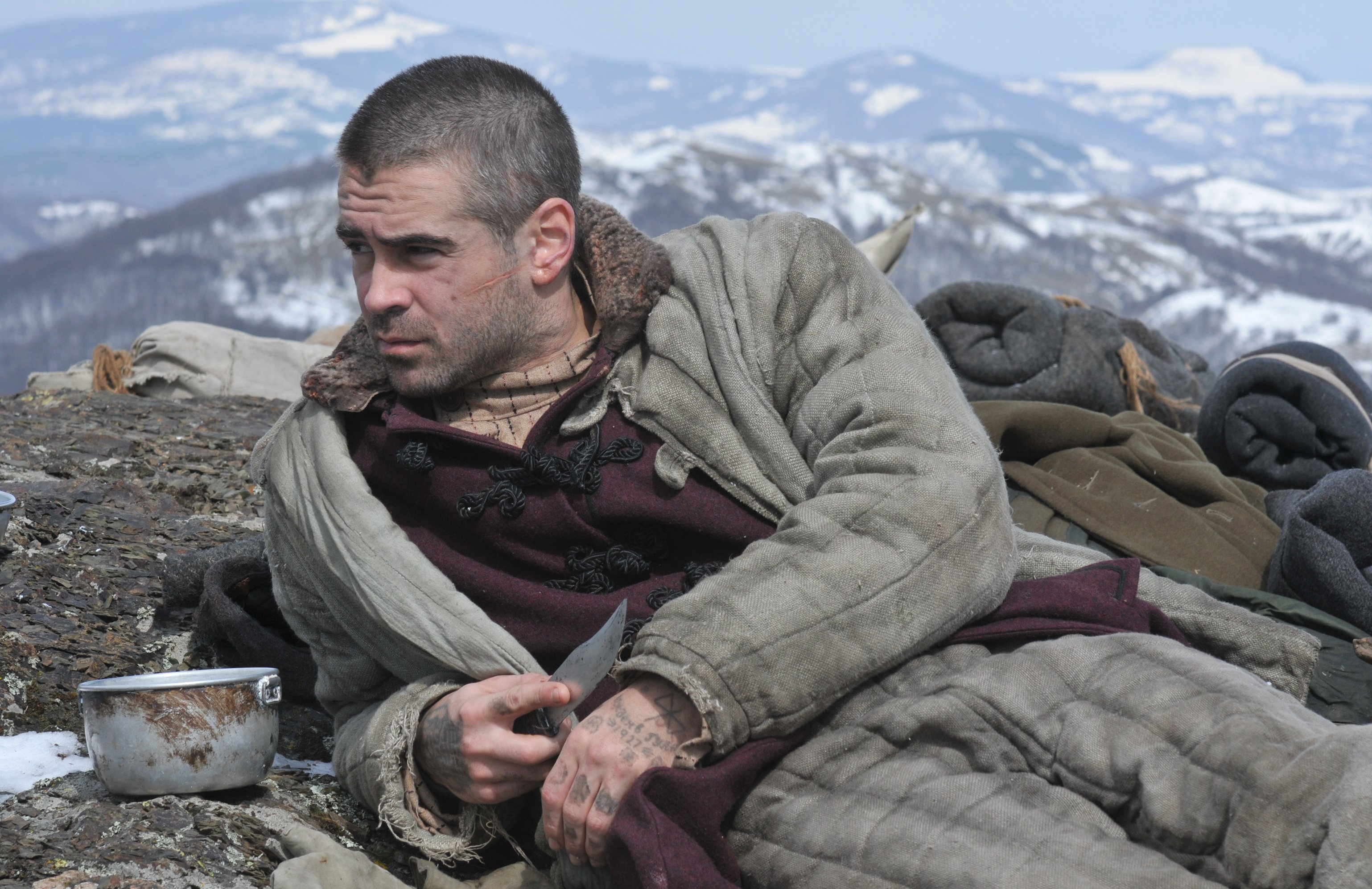 Colin Farrell in 'The Way Back'

We don’t see enough of Peter Weir. He’s a six-time Oscar nominee. His films include some of my all-time favorites—The Year of Living Dangerously, Fearless, The Truman Show. But The Way Back is the first picture from this Australian director since Master and Commander: The Far Side of the World (2004)—a swash-buckling naval adventure that for some reason failed to spawn a franchise while Pirates of the Caribbean did. Weir’s latest film is the kind of honest, old-fashioned spectacle that Hollywood doesn’t make any more, and that’s a shame.

Inspired by first person accounts and a novel by Slavomir Rawicz called The Long Walk: The True Story of a Trek To Freedom, this epic tale of wilderness survival follows a group of prisoners who escape from the Soviet Gulag in 1940, and trek across Siberia, Mongolia’s Gobi Desert and the Himalayas in a search for freedom. They’re a Dirty Dozen-style international ensemble. Ed Harris plays a despondent American engineer who got stranded behind the lines; Jim Sturgess is a Polish soldier who was falsely accused of being a spy, and whose skills as a woodsman prove crucial to the group’s survival; Colin Farrell is cast as a treacherous Russian thief, a lone-wolf who might betray the group at any moment. Saoirse Ronan (Atonement) portrays a young refugee who joins them along the road. The dialogue is in English, with a bazaar of accents that sound surprisingly credible. The film was shot in Bulgaria, Morocco and India, locations that effectively double for those in the story, which spans 12 months and 10,000 km. The Way Back combines breathtaking vistas with the visceral thrill of a survival ordeal and the satisfaction of a well-tooled character piece of character acting. It’s been largely ignored by the various awards so far, and this is exactly the kind of stoical, well-crafted filmmaking that, these days, may never find the audience it deserves.