The ’80s are back with a vengeance. This weekend offers reboots of two franchises from that era, with a remake of The Karate Kid and a movie adapted from The A-Team TV series. The Karate Kid is the better movie, with a higher martial arts pedigree than the original. It’s also the unplugged alternative, with the accent on physical stunts and uncynical sentiment. But if you’re looking full-bore blockbuster with a fireworks show of special effects, The A-Team offers the purest blast of action-adventure trash that we’ve seen so far this spring. I’ll get to The A-Team later in this post, but first my piece on remakes, sequels and The Karate Kid, which appeared in the magazine this week:

If you’ve seen a Hollywood movie this spring, chances are it was made from recycled material—a sequel, a prequel or a remake. The tally so far: Alice in Wonderland, Clash of the Titans, Robin Hood, A Nightmare on Elm St., Iron Man 2, Sex and the City 2, Shrek Forever After. Next up are The A-Team, The Karate Kid, Toy Story 3 and The Twilight Saga: Eclipse. It’s hard not to get cynical about this glut of born-again blockbusters.

But what’s most irritating is not the slavish cloning of brands; it’s the contortions filmmakers go through to give them a novel twist. Do we really need to see a pre-Sherwood Forest Robin Hood defend Britain from an armada of medieval landing craft in a war movie that plays like Saving Private Ryan unplugged? And do Sex and the City fans really want to see their post-feminist icons recast as Barbie-doll drag queens, mocking Islamic dress codes while being pampered by Arabic slaves on a sheik’s junket?

Inbreeding has become Hollywood’s preferred business model, and the progeny just gets more and more grotesque. But on rare occasions, in the desperate effort to reboot old brands, filmmakers actually improve on the original. Notable examples are Daniel Craig’s Casino Royale and last year’s Star Trek. That’s also the case, in some respects, with The Karate Kid remake and Toy Story 3.

The ingenuity of The Karate Kid, which opens this week, lies in the casting. Ralph Macchio, who starred in the 1984 original and two sequels, was already in his 20s when he was first cast as the Kid, a New Jersey teen who moves to California with his mom and trains like a mini-Rocky to defeat a gang of blond bullies. The remake stars Jaden Smith—the son of Will Smith and Jada Pinkett Smith—who is a mere 12 years old. He plays Dre Parker, a mouthy brat from Detroit, who moves to Bejing with his mother (Taraji P. Henson) when she’s transferred to a new job.

Shot in China, the fable plays out against a much broader cultural divide than the original—a breakdancing African-American child with cornrows is persecuted by Asian thugs twice his size. And the spectacle, fortified with Chinese pageantry, unfolds on a grander scale. It’s a virtual helicopter tour of breathtaking locations, from the Forbidden City and the Great Wall to the monastery peaks of the Wudang mountains.
Smith’s tender age makes his character’s romance—with a Chinese violin prodigy—painfully precocious. But it also makes his eventual prowess as a fighter more miraculous. And this impudent kid with charm to burn has an ideal foil in martial arts legend Jackie Chan—the remake’s other casting coup. There’s no karate in this Karate Kid, just kung fu.

Which is cooler. Taking on the role of the wily teacher created by Pat Morita, Chan not only proves himself as a character actor, he raises the bar for the fight scenes, which are tougher, more dazzling and more convincing than before. Chan rebrands the role with deadpan wit from his first appearance, as he tries to catch a fly in mid-air with chopsticks. The scene is almost identical to the one in the original—until he nails the bug with a fly swatter. A textbook case of creative cloning.

Toy Story 3 is a sequel, not a remake. But each movie in the Disney-Pixar franchise conforms to a strict narrative template: led by Woody (Tom Hanks), the vintage cowboy doll, a clan of animated toys get separated from their beloved master, Andy, and have to fight their way home. In Toy Story 2, the enemy was a venal collector. In Toy Story 3, Andy is off to college and his toys are once again playing dodgeball with oblivion. Will it be the attic? A yard sale? No, they’re donated to a daycare centre—a prison camp ruled with an iron paw by a strawberry-scented stuffed bear.

While the franchise’s sentimental mould is inviolable, this sequel has a darker, more satirical edge. Some of the Orwellian daycare toys are quite scary, like the mad-eyed, cymbal-crashing monkey on surveillance duty, or the big, blank-eyed baby doll. And in an apocalyptic set piece, the toys are sent on a harrowing flume ride through trash shredders to landfill hell. Of course, this Toy Story, like the others, ends happily. Some things will never change. 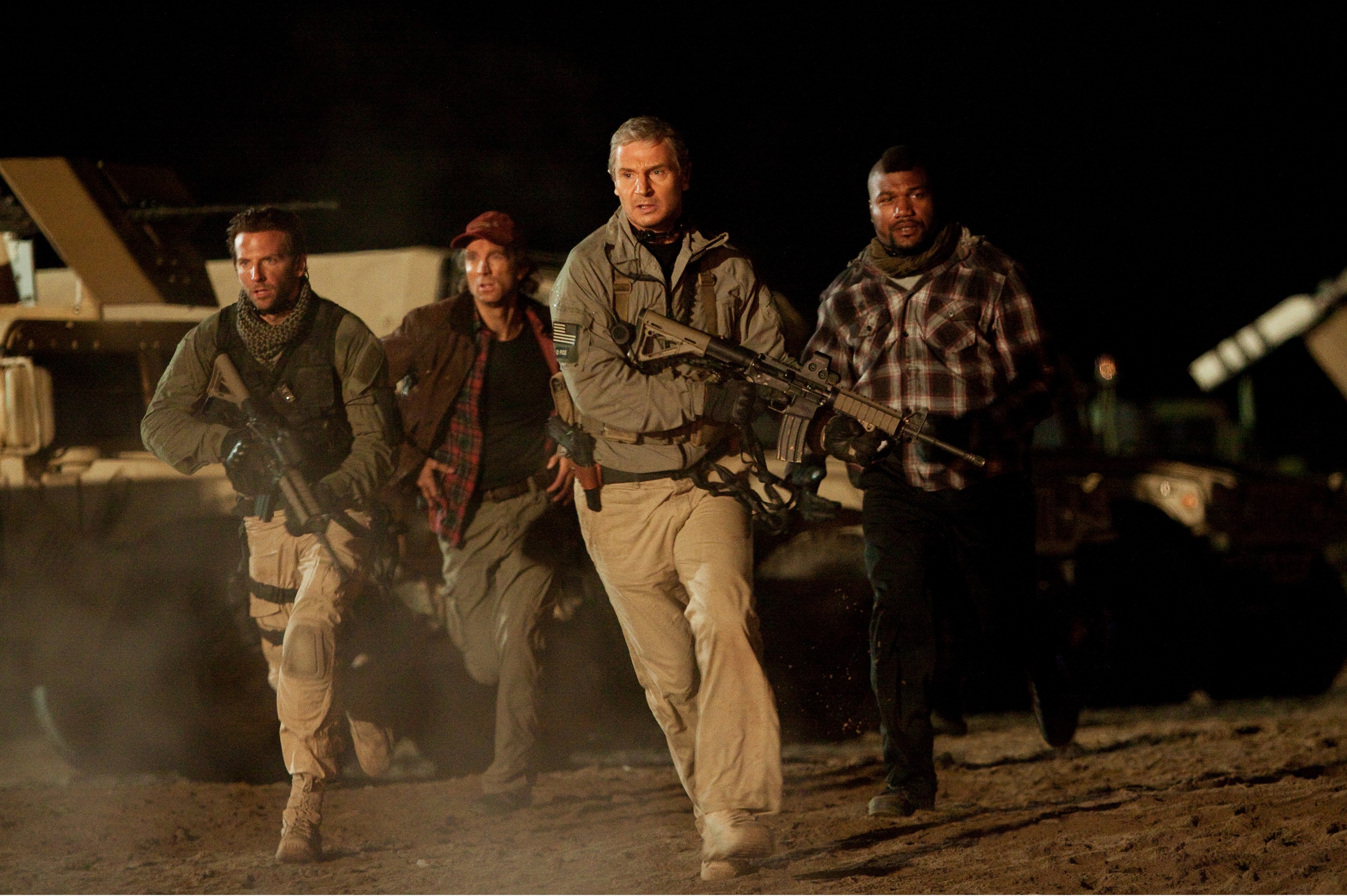 This kind of thing doesn’t usually appeal to me—a mindless action movie jam-packed with absurd stunts and bloated effects that are strung together by an utterly implausible plot. But The A-Team is . . . well, not so bad.  I can’t compare it to the TV show. (I had better things to do in the early ’80s, although Mr. T was an inescapable pop icon.) So for me, this kind of genre piece calls to mind countless Dirty Dozen-style commando, heist and caper movies. The A-Team does not aim high. The script is closer to B-grade fare. But it achieves exactly what it sets out to do. The cast seems overqualified, especially A-list thespian Liam Neeson. Talk about range: for Neeson this is quite a jump from starring in Atom Egoyan’s Chloe. And even he appears to be having trouble buying himself as Hannibal Smith, the squad’s gruff, cigar-chomping leader. But he does look to be having a lovely time, like an actor on holiday. In almost every gesture you can see him thinking, “Oh, why the hell not!”  (I also kept thinking he resembled  Alan Alda in M.A.S.H., a notion that was impossible to get out of my head once it was stuck there.) 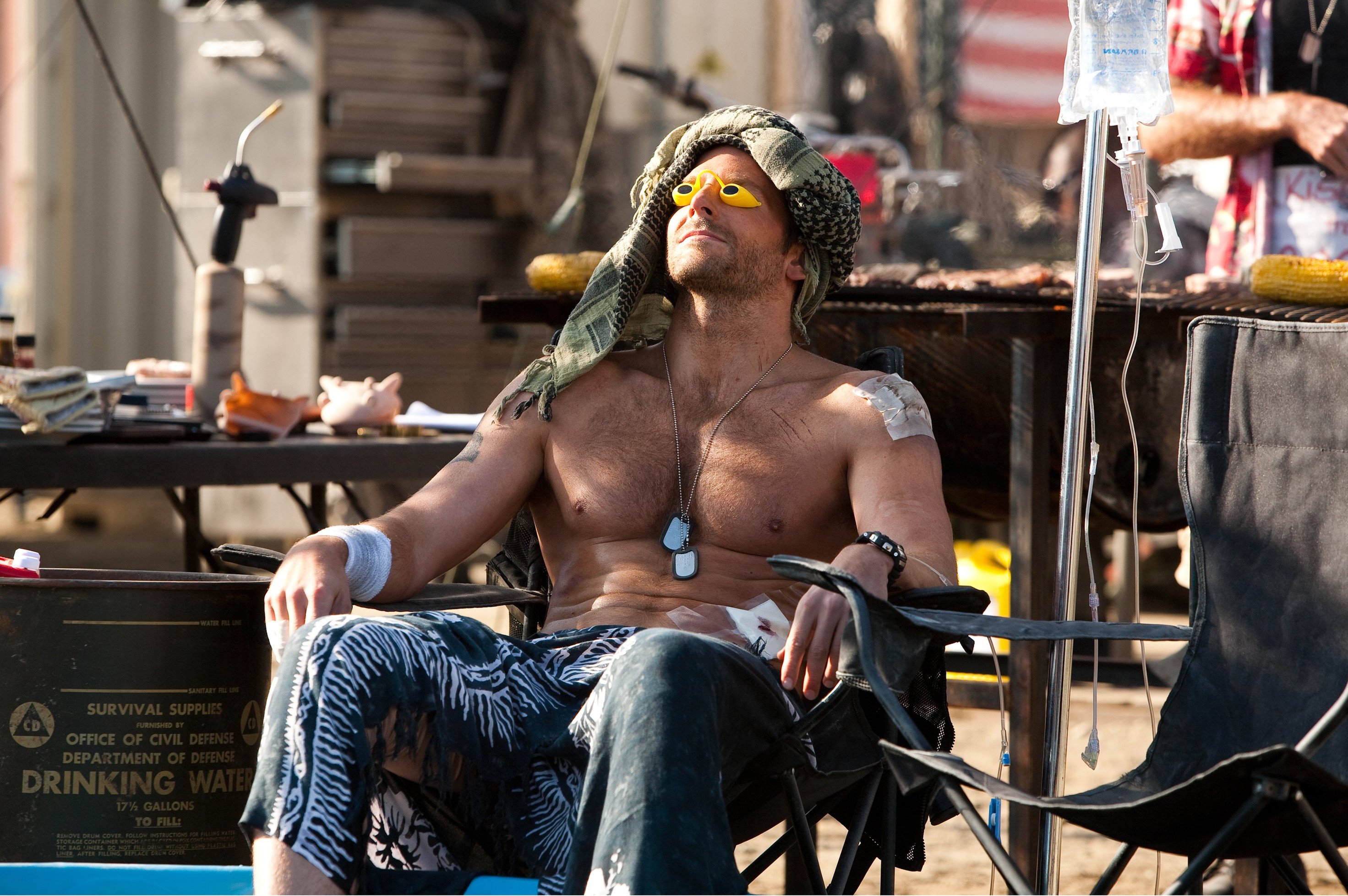 Bradley Cooper in 'The A-Team'

Bradley Cooper, however, looks utterly at home in The A-Team. He makes a meal of his role as Face, the charming con man. Cooper (Wedding Crashers, The Hangover) seems bent on usurping Matthew McConaughey’s title as the Man Who Always Acts With His Shirt Off (as parodied by Matt Damon on Letterman). It’s as if he’s on a one-man mission to turn an action movie into a chick flick. This rising star, who has forged a career from a shit-eating grin, is also endowed with a romantic subplot: his character is chasing an old flame (Jessica Biel), a military cop who becomes the team’s military nemesis. The troupe’s real surprise is Sharlto Copley, the South African star of District 9, who delivers a deliriously unhinged performance as Murdoch, the crazy chopper pilot. Copley carves out corners of scene-stealing brilliance in this script, elevating every scene he’s in. Rounding out the cast is former UFC light-heavyweight champion Quinton “Rampage” Jackson, who fills Mr. T’s shoes as B.A. Baracus, a hapless, thick-headed muscleman who’s afraid of heights. In the Age of Obama, this Black Power bruiser who discovers Gandhi in prison is a real throwback—not just retro, but retrograde. On the other hand, you don’t want to spend too much time over-thinking a movie that is styled as a self-conscious guilty pleasure.

What about the plot? I’m not sure if it matters to anyone. But it starts out as an origins story, showing how the quartet comes together as a brotherhood of former Army Rangers whose paths collide. The setting is updated, with the Iraq war providing the backdrop and a private military contractor named Black Forest—an obvious reference to the real-life mercenary army, Blackwater—serving as the villain. There’s even a dash of political content as Face greets the Black Forest operatives: “I thought you boys would be busy installing a dictatorship or overthrowing a democracy. . . You’re not soldiers, you’re assassins in polo shirts.”

The military, the mercenaries, the CIA and the A-Team square off as four corners of a ramshackle intrigue that revolves around the theft of U.S. dollar counterfeit printing plates. But it hardly matters if the plot is comprehensible, or credible. Not when the stunts include the men bailing out of a transport plane in a tank held aloft by parachutes.

What’s most unlikely, however, is that this story of global conflict, which is set in six different spots around the world—from the Iraq desert to a Frankfurt train station—was shot entirely in the Vancouver area. Talk about suspension of disbelief.