Basquiat and Ginsberg shine, while Malkovich tries to steal a movie from a horse 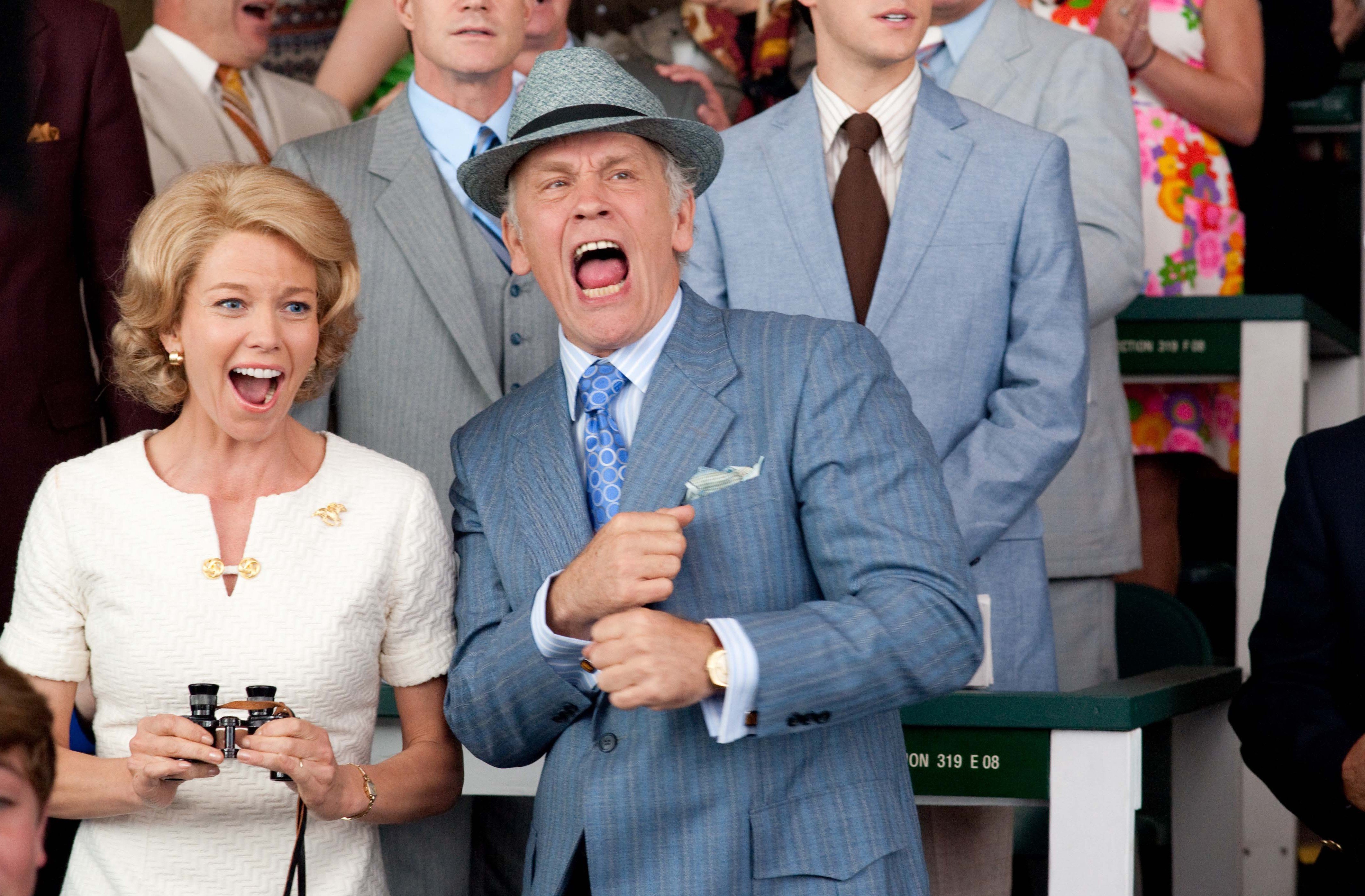 After last week’s passel of raves reviews, I can’t get too excited about any of this week’s major releases. (And if I trip over a few typos, it’s because—pause for shameless self promotion—I’m rushing off to the Vancouver International Film Festival, which is screening my short film, Yesno, with Ron Mann’s documentary In the Wake of the Flood Oct. 8, 9 and 11.)  But I do recommend two small movies about dead bohemian visionaries, both opening only in Toronto for now, and both playing at the TIFF Bell Lightbox: Howl, starring the chameleon-like James Franco as the young Allen Ginsberg, and Jean-Michel Basquiat: The Radiant Child, a wonderfully rich documentary about New York’s incandescent art star. More on those in a moment. First, a quick look at the wider releases: Secretariat, a square, feel-good Disney drama about a legendary thoroughbred, and It’s Kind of a Funny Story, a hip, feel-good indie drama about a troubled teen who receives some gentle life lessons in a mental institution.

We all know how this true story is going to turn out given that, in 1973, Secretariat made history as the first horse to win racing’s triple crown in a quarter-century, setting two records that have yet to be broken. The story has an unbeatable momentum, harnessing an entire team of underdog heroes—Secretariat’s stubborn owner, Penny Chenery (Diane Lane); its flamboyant Québécois trainer, Lucien Laurin (John Malkovich); its daredevil Canadian jockey, Ron Turcotte (Otto Thorwarth), and, last but not least, the horse itself. Yes, the team includes two Canuck characters, which gives this slice of history some purebred Canadian pedigree.

The story is couched as a moral tale, presenting Chenery as a feminist-lite Virginian housewife who mildly neglects her husband while bucking old-school prejudice in the boys’ club of thoroughbred racing. Her rivals are cast in an almost villainous light, as if she were Muhammad Ali striking a symbolic blow for social justice.  But Chenery gets to have it all, serving both her horse and her family, who rally around her as the drama comes down to the wire.

Randall Wallace (The Man With the Iron Mask) directs this thing with a broad brush. He is, after all, the man who wrote both the screenplay for Braveheart and its novelization. But Diane Lane, an actress who habitually rises above the material she’s saddled with, does a fine job in the lead role. She’s a treat to watch. The most annoying thing about the movie is Malkovich’s show-boating performance as the dandified Laurin, a character used for comic relief. As if to give his character some Québécois colour, the actor bursts into bouts of French. Sadly, it’s Parisian French, which only adds to the inauthenticity of the performance. Malkovich, who’s taken to brazen mugging in one film after another (stay tuned for Red), tries to steal every scene he’s in. But that doesn’t work when the intention is so transparent. And no one can steal the movie from its true star, the horse, who appears to be a method actor. 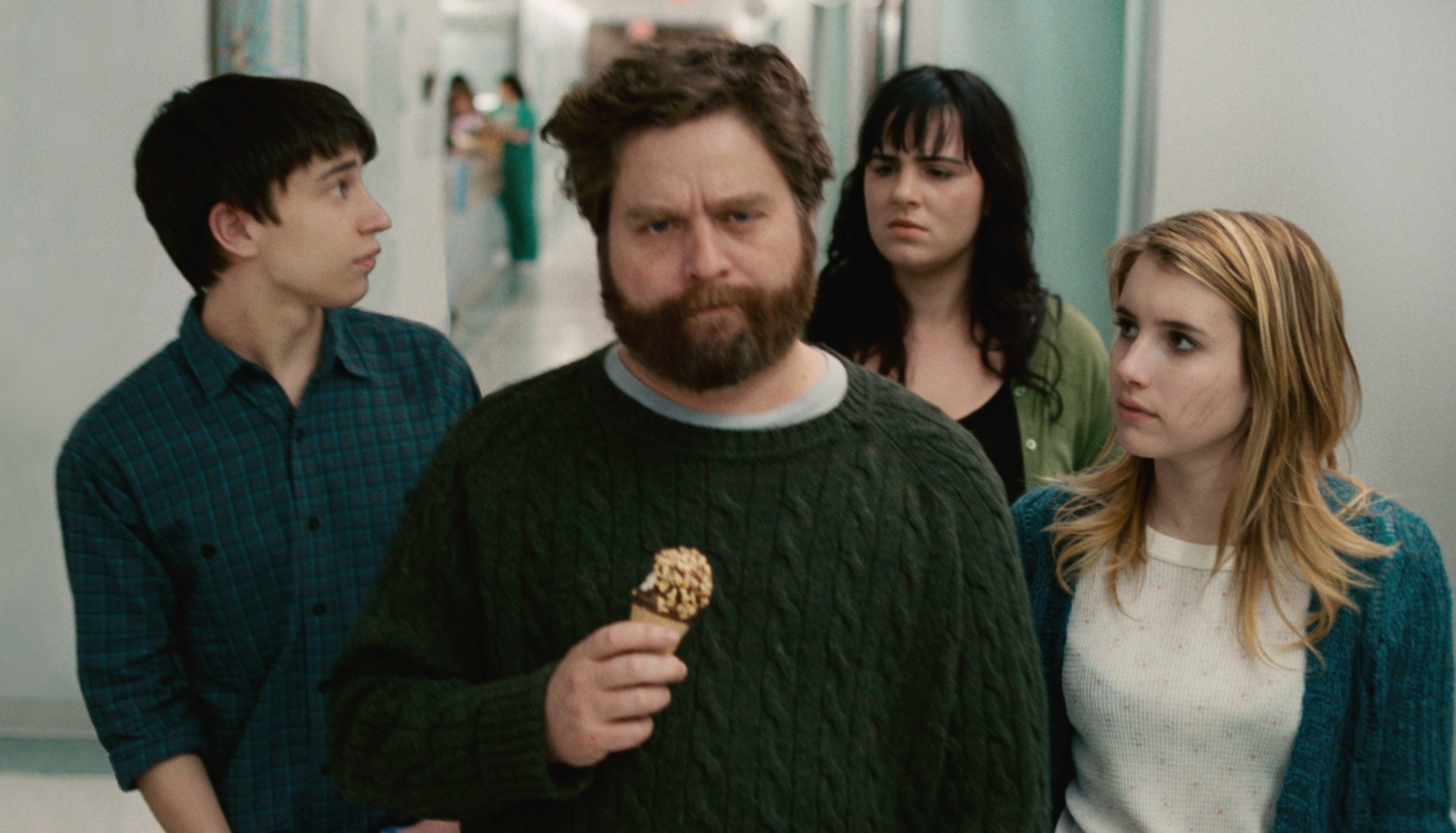 Keir Gilchrist (left), Zach Galifianakis and Emma Roberts in 'It's Kind of a Funny Story'

It’s Kind of a Funny Story

The title says it all. The film is kind of funny, but not so much—part funny-peculiar, part funny-haha. It’s kind of serious, but not disturbing. Kind of comfortably unengaged.

The story concerns a mild-mannered 16-year-old named Craig (Keir Gilchrist) who checks himself into a hospital psych ward after flirting with the idea of hurling himself off the Brooklyn Bridge. Craig, who seems eminently sane, is alarmed to find himself sequestered for a mandatory five-day minimum stay in an adult ward—the youth wing is closed. But there’s not much jeopardy involved. As Craig makes himself at home among an amiable array of eccentrics, he manages to bond with both a girlfriend (Emma Roberts) and a mentor (Zach Galifianakis).

Co-directors Anna Bowden and Mark Bowden sidestep the clichés of loony bin delinquency. Compared to the asylums in One Flew Over the Cuckoo’s Nest and Girl Interrupted, the ward in this movie is about as menacing as a slumber party. The mere presence of Galifianakis (The Hangover) has us expecting him to shape-shift into a junior version of Cuckoo Nest’s Jack Nicholson at any moment. But the actor tones down his usual gonzo antics and seems content to play it straight, with an avuncular charm that’s pleasantly off-kilter. Led by a firm but sage psychiatrist (Viola Davis), this ward is not the archetypal snake pit, where the institution is more insane than the inmates; for Craig, it’s a cozy self-help haven where he can sing and draw and find his inner artist.

There’s nothing obviously wrong with It’s Kind of a Funny Story. The performances ring true, the characters are likeable, and the shy, meet-cute chemistry between Roberts and Gilchrist plays well. The wry observational drama, hinting at darker forces that never fully surface, may offer a more realistic portrayal of life in a psych ward that the usual Hollywood version. But the film plays it too safe: there’s simply not enough at stake. You could say that real-life emergency wards, after all, are awfully sleepy compared to the unrealistic ERs we see on TV, which is why we don’t visit them for entertainment. 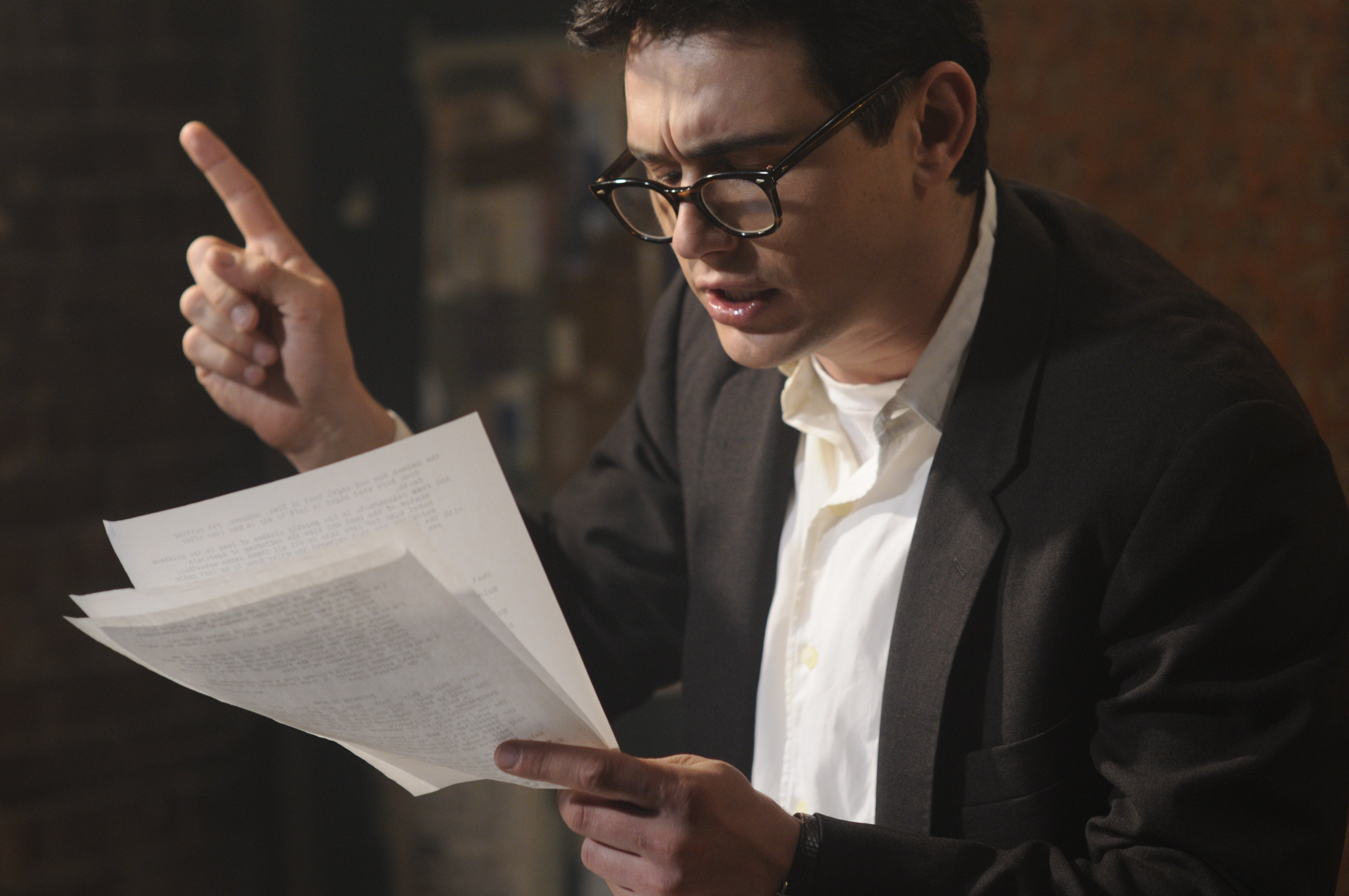 This is not a big fat Hollywood biopic about Allen Ginsberg, and that is probably just as well. Instead, Howl is a movie of modest ambition, a narrow prism that splits Ginsberg and his landmark epic poem into four dramatic re-enactments—the 1957 obscenity trial that had turned Howl’s literary merit into the stuff of courtroom drama; a famous Time magazine interview with Ginsberg; black-and-white scenes of the poet reading Howl to a rapt audience in a coffee-house; and flights of animation that attempt to bring the poem’s hallucinatory visions to life with comet-like angel-headed hipsters zooming hither and yon.

The animation is the movie’s weak point; it seems gaudy and gratuitous. The courtroom scenes are entertaining, although there is not much of a contest as the defense lawyer (Jon Hamm) demolishes the timid prosecutor (David Strathairn), while witnesses debate literary crimes and a perplexed judge (Bob Balaban) presides, as if wondering how a book of poetry has ended up on trial.

The main reason to see the film is the note-perfect performance by James Franco. Without resorting to caricature, he channels Ginsberg with sly precision, and nails his elusive cadence—that slightly behind-the-beat incantation that buffers blind delirium with shrewd self-awareness. In the interview scenes, Franco is again spot-on, performing transcript material but letting the thoughts materialize out of thin air, as if they are only just occurring to him.

I felt wary about Franco at first, wondering if he could pull it off, perhaps because Ginsberg has a personal significance for me. He was the subject of the first arts story I ever wrote for a newspaper, when I covered a reading he did in Hart House at the University of Toronto in the late ’60s. I remember coming back to my typewriter intoxicated with the poet’s jazz rhetoric, which, to my editor’s alarm, I tried to replicate in my review. As he toned down my prose, I still remember his exasperated response: you can’t just pile present participles. 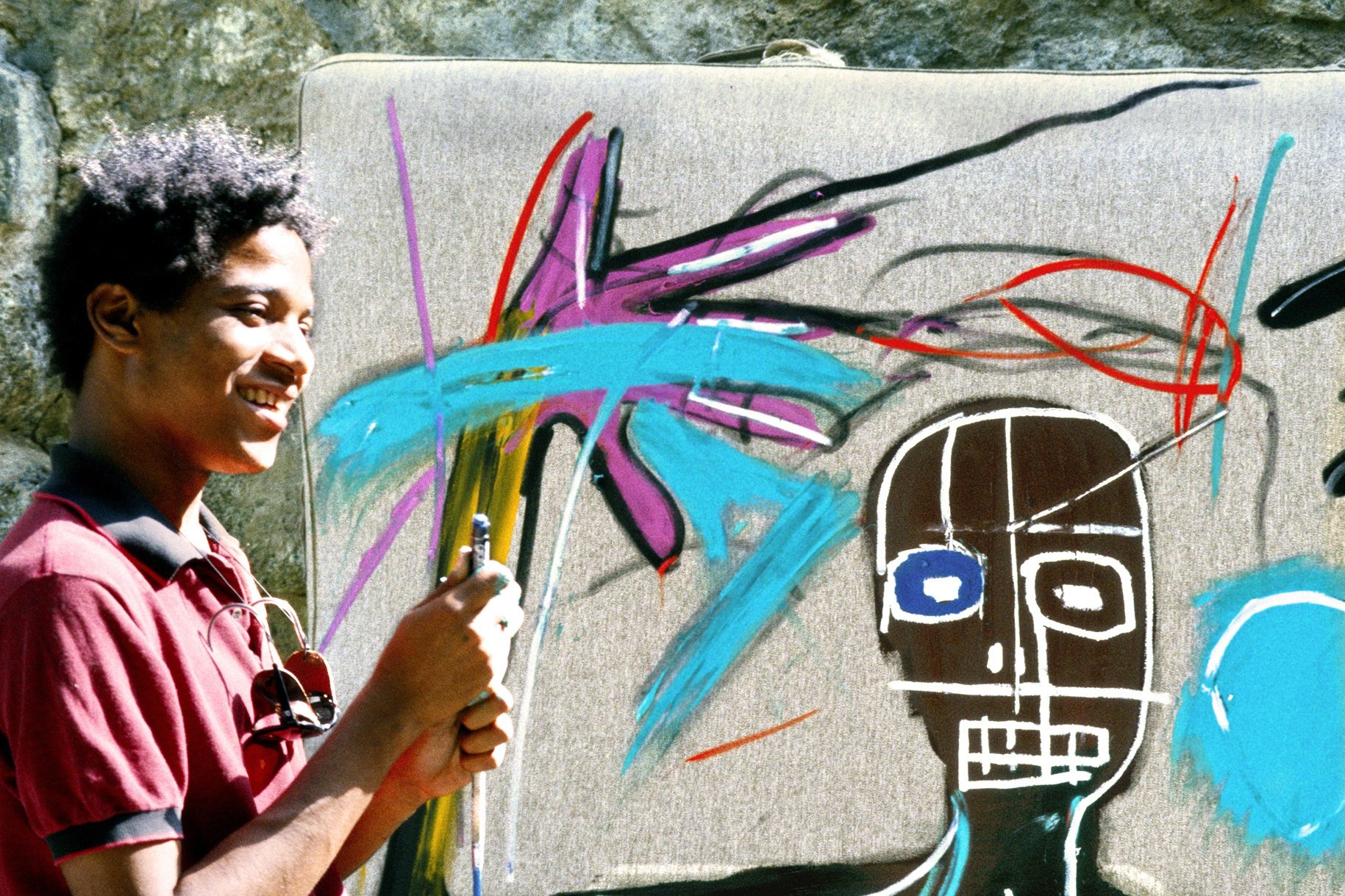 If Allen Ginsberg was the rock star shaman of his generation—exploding taboos and making mongrel visions from urban shrapnel, fusing language and music, sex and protest, history and hallucination into epic landscapes —Jean-Michel Basquiat was his ’80s equivalent in the art world. Of course, Basquiat was a much younger, more tender prodigy, a pop star who burnt out tragically young after being lit up by crack-like celebrity in the crucible of the New York art world. But in both cases, at the time there was a thrilling sense that bohemian brilliance had never burned so brightly in America.

This documentary is a wonderfully rich and evocative portrait of the artist as a young man—who, dying at 27, he was never anything but. Director Tamra Davis constructs the film from a wealth of archival footage and photographs, and an eclectic array of interviews with the artist’s contemporaries—from painter Julian Schnabel to Sonic Youth’s Thurston Moore—along with a casual video interview she once shot with Basquiat. The story of his meteoric rise neatly coincides with the punk renaissance of Manhattan street culture in the late 70s and early 80s, when about 500 multi-media poseurs and pioneers became the self-proclaimed core of everything that mattered, and as one observer puts it, “everybody was doing everything”—multi-tasking in film, painting, music, dance and drugs. Basquiat was the model of the new New York artist. Until I saw this film, I never realized he played bad clarinet in a band with Vincent Gallo.

As Basquiat shot from graffiti notoriety to gallery fame, he was the savior who heralded the triumph of loud, visceral physicality after the long minimalist drought, after the art world had painted itself into a corner, reducing modern art to the conceptual joke of a blank canvas. As art dealer Diego Cortez sums it up: “I was tired of white paintings and white people and white wine.”

The film plumbs the myriad of influences on Baquiat, belying the popular notion that he was a naïve artist who simply painted from the gut. Like a less clinical Warhol, who became his elder soulmate, he reimagined and remixed a complex history of art and pop culture. But unlike Warhol, who fixated on refracted and manufactured artifice, Basquiat’s art eviscerated the world around him with the impact of a fragmentation bomb, while referencing a trail of iconoclast geniuses such as Picasso, Van Gogh, Miles Davis and William Burroughs.

For anyone who saw Basquiat, Julian Schnabel’s affectionate drama about his colleague, this documentary serves as an essential companion piece. One of the real pleasures of the documentary is that Basquiat’s prolific work is presented in such kaleidoscopic abundance. The film also delves into the artist’s craving for success, his ambitious rivalry with Schnabel, and his father-figure romance with Warhol—while doing justice to his fiercely independent spirit. What emerges is the portrait of a wild child with a deceptive sophistication. As one friend and critic put it, Basquiat’s paintings “were deliberate enigmas. . . They said, get with it! See the complexity of our culture. I’ll give you a few hints.”