You can see Carey Mulligan, the Oscar-nominated star of An Education, in two movies opening this weekend: she has a thankless supporting role opposite Shia LaBeouf in Wall Street: Money Never Sleeps and lead role in Never Let Me Go. They’re wildly different, and there’s not question which is the better film. Oliver Stone’s Wall Street sequel is a messy, bombastic spectacle—a morality tale as midway ride. Its chief asset is Michael Douglas, whose remarkably shaded performance somehow survives Stone’s sledgehammer direction. Based on the Kazuo Ishiguro novel,  Never Let Me Go is a sublimely measured, achingly beautiful drama, anchored by superb performances from Mulligan, Keira Knightley and Andrew Garfield.

I saw Wall Street: Money Never Sleeps last May in Cannes. The morning after the film’s premiere I joined Stone, Douglas and Mulligan in round-table interviews in a windblown cabana at the opulent Hotel Du Cap. Here’s my video of the gang, who were clearly in morning-after mode, especially Stone:

And here are more candid clips of Carey Mulligan, who seems unsure about the movie after seeing it the night before in Cannes:

There’s a lot of of talented actors onscreen in Wall Street: Money Never Sleeps, but they’re defeated by Stone’s heavy-handed script.  Aside from Douglas’ shape-shifting reinvention of Gordon Gekko, which is almost worth the price of admission, the other characters are steamrolled into stereotypes, from LaBeouf’s ambitious trader to the Gekko 2.0 tycoon played by Josh Brolin. The brilliant Frank Langella has an incandescent but short-lived role as the old-school mentor to the young trader played by Shia LaBoeuf.  Mulligan, cast as Gekko’s estranged daughter—and LaBoeuf’s girfriend—is wasted. That said, even though Stone rivals Michael Moore as a propagandist, and overloads his dialogue with so much aphoristic messaging that it ceases to be credible, he’s a compelling visual showman. And there’s a curious paradox here: Stone’s movie is a putative critique of capitalism gone mad, yet it revels in the opulence of the world it’s trying to tear down. Like a bloodthirsty anti-war movie. That said, there’s some fun to be had in this over-ripe melodrama, and no matter what you think of Money Never Sleeps, at least it’s not dull. 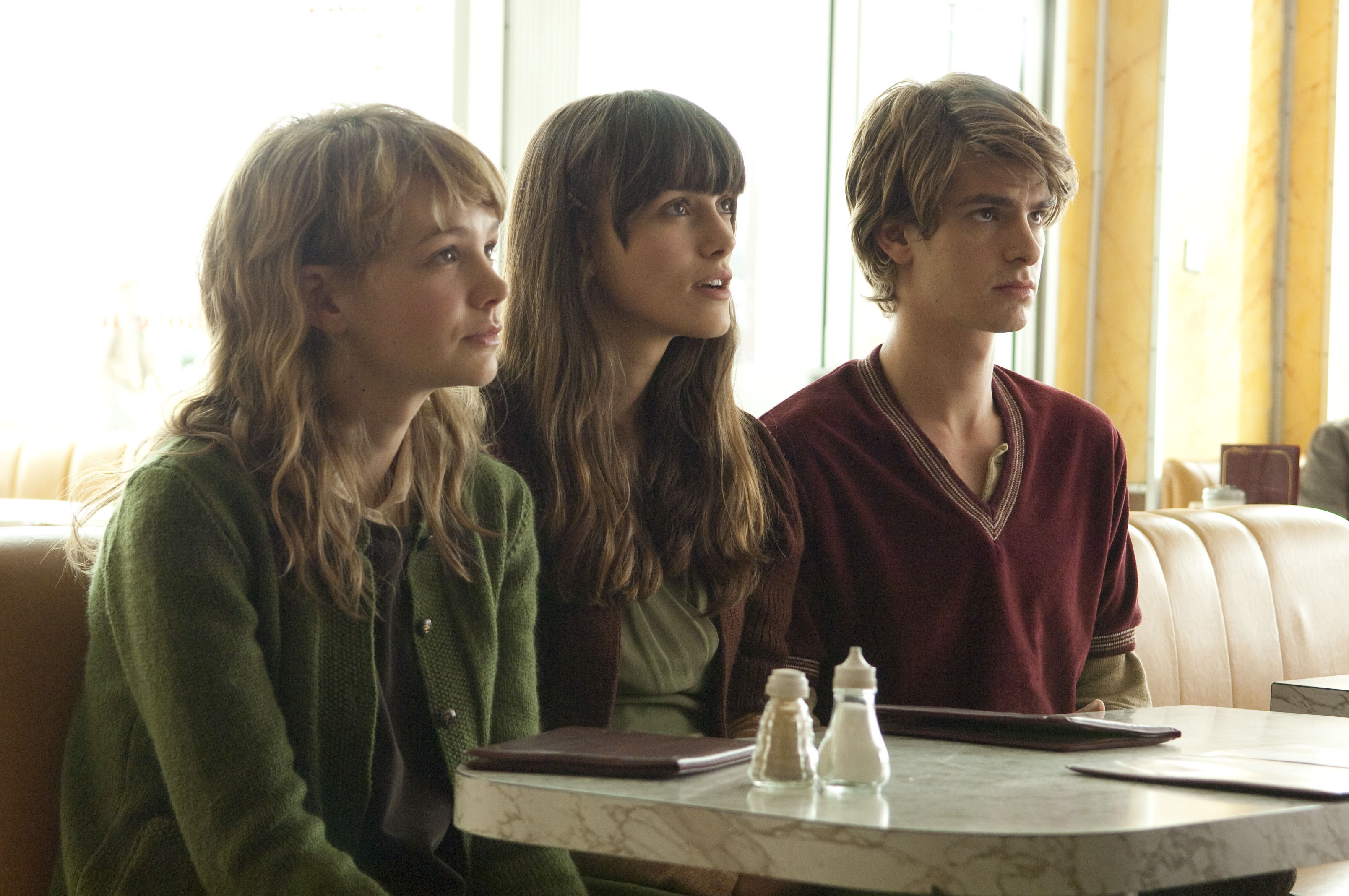 Here is an exotic hybrid. We’ve got Alex Garland, the writer of The Beach, adapting a celebrated dystopian novel by Kazuo Ishiguro. I haven’t read the Ishiguro novel, but those who have are a bit shocked to see that the story’s horrifying premise, which remains mysterious for much of the book, is explained at the end of the first act. I suppose that makes it fair game for plot summaries, but I’m not going to do that here, because I appreciated the jolt of revelation that came early in the film.  Let’s just say that the story is set in England, and concerns a love triangle among three former school mates (Carey Mulligan, Keira Knightley and Andrew Garfield) who acquiesce to a grim and preordained destiny. The three leads are superb. Mulligan’s performance doesn’t come as a surprise, but who knew that behind the Pirates of the Caribbean damsel lurked  such an intriguing actress. (David Cronenberg, who cast Knightley in his Freud/Jung biopic, A Dangerous Method, has been raving about her, and here you can see why.) As for Garfield, he’s the next Spider-Man, but between his performance in this film and in The Social Network (opening next week), he may be overqualified for franchise work. Never Let Me Go is science fiction that plays as pure realism, with no techno gimmickry, and barely any explanation of the premise. Director Mark Romanek conjures visions of mortality via elegiac images of England’s cozy landscape and haunting architecture. He lets the film unfold as a delicate mood piece, sustaining a tone of aching beauty with remarkable control. This is a film you don’t watch so much as inhabit.