UPDATE: Well, it was fun while it lasted. Exactly 24 hours after we posted Jason Bell’s photograph of the post-christening gathering of the Windsor and Middleton families, it was taken down. We had no choice. Under the legal agreement we signed with his agency, Camera Press, we could use the photo for just one day.

You can still view the four officials photos of Prince George, Will and Kate and the Middletons and Windsors on the Clarence House website.

And, here’s a photo of Prince George from the christening that we still can use: 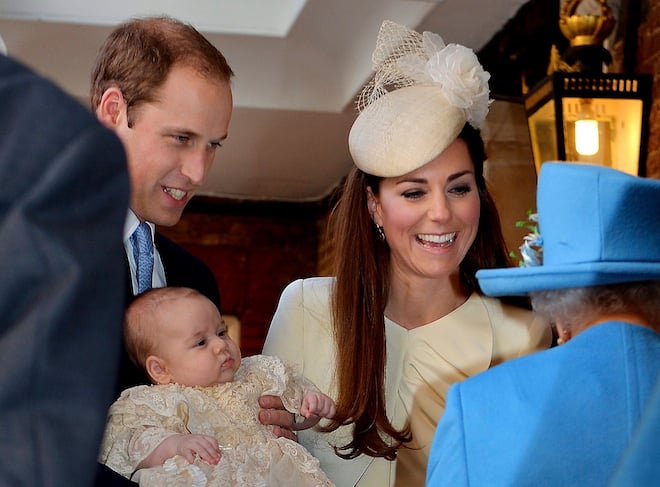 He’s three months old, but Prince George was definitely the centre of attention at his christening, held on Wednesday, Oct. 23 at the Chapel Royal, which was followed by the official photo shoot held nearby at Clarence House. Watching his every move was one Queen (Elizabeth), four princes (Philip, Charles, William, Harry), two duchesses (Camilla, Kate), one earl (godparent Hugh Grosvenor), and a passel of relatives and godparents and spouses. Sure, everyone loves looking at a baby, but honestly, the fact that George was wearing the royal family’s impossibly elaborate christening gown surely helped.