Shows That Recycle Sets From Other Shows

This is not new, but I was waiting until I could get an appropriate picture to go with it: you may or may not have read the speculation that the most successful comedy on TV, Two and a Half Men (successful in terms of ratings and money, I mean), uses a set that’s very similar to the set from the later seasons of Laverne and Shirley. The decorations and props are different, but the set on the current show is structurally exactly the same as the set Laverne and Shirley lived in after they moved to Los Angeles: the door and small staircase at the left, the large glass doors at the back, the kitchen at the right. Here’s a picture of (most of) the later L&S set: 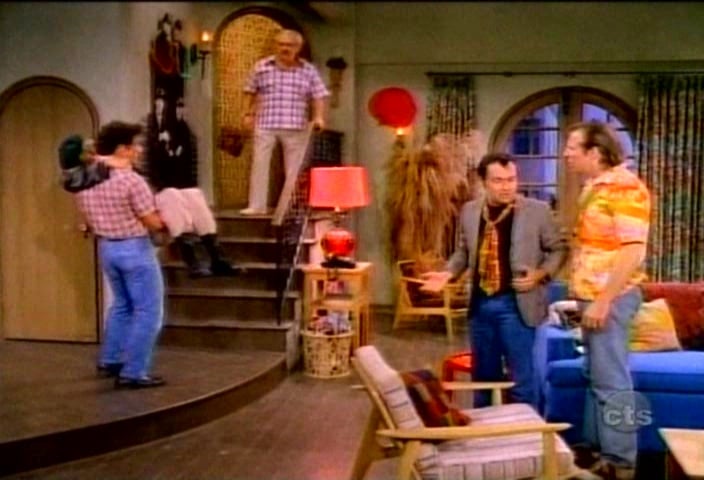 And here’s a composite of two pictures of part of the Men set (I wanted to find a long shot, but there don’t seem to be many long shots of the whole set). 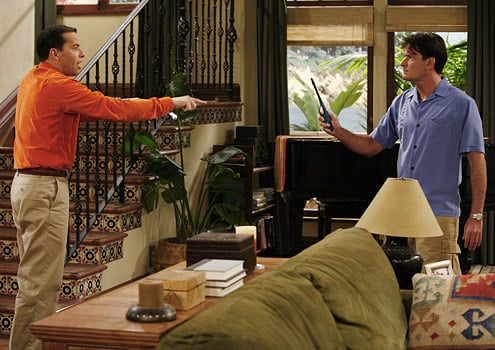 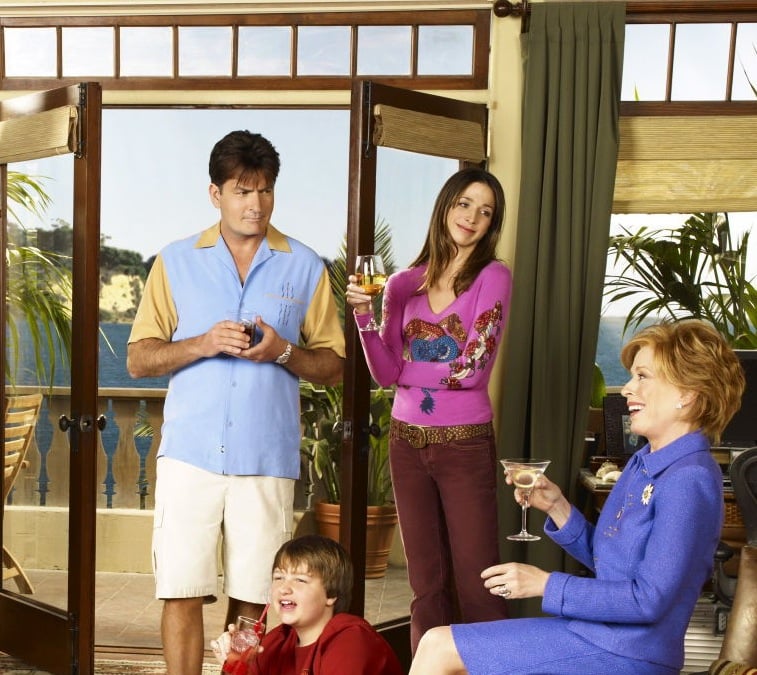 Now, it appears that the production staff of Two and a Half Men officially denies that their set is based on the older set, saying that the resemblance is simply because “the two sets share a Spanish Colonial style.” I don’t really buy it; it’s true that the Spanish Colonial approach will lead to similar designs, but it seems doubtful that two sets would wind up with the same basic layout unless one was at least partly inspired by the other. Though I suppose that it could simply be that the rigid nature of four-camera sitcom layout — everything has to be side-by-side, facing the audience — makes it possible that two shows could come up with the same layout on their own. And one possible argument that the sets aren’t the same is that they are produced by different companies and shot on different stages. Traditionally, recycling of sets and costumes is done within a studio; when The Odd Couple was canceled, Paramount redecorated the set and made it into the apartment for a new show called… Laverne and Shirley. Circle of TV life.

(It may be that one factor in Men‘s success is simply that — whatever the origin — it has a good, solid, old-fashioned sitcom set, with everything laid out properly and plenty of room for the actors to move around, run up and down the stairs, make wacky entrances from different places, etc. Men is not a show I can love, but I respect the fact that it knew enough to incorporate certain basics, like a set that values space and comic potential over realism, and isn’t over-decorated.)

Of course one of the reasons we wind up looking for these similarities between shows from different eras and different studios is that the amount of out-and-out recycling is less than it used to be. Or at least less obvious. TV is an outgrowth of the B-movie, where sets and costumes were constantly reused (and even A movies used to recycle sets and costumes from any movie that was no longer in release), and so any studio would use the same living rooms, lobbies, high school halls, etc. from one show to the next. Or even within a show; TGIF viewers still have fond memories of the time Boy Meets World dumped an apartment set that had been built for the hip young teacher… and the kids moved into a brand-new apartment that was structurally exactly the same as last year’s apartment, but with different furniture. I think that now they usually try to make sure a new set will have a different structure/layout from the one that stood there before. It can still be spotted by alert eyes, though; I found this post noting that Fox recycled the Wolfram & Hart set from Angel when creating the corporate office for its short-lived show The Loop.