This is something I’ve been mulling over a bit lately: are there any multi-camera sitcoms today that have really effective sets?

Sets are important on most shows, of course, since almost every show has standing sets that are used in every episode. (With some exceptions like Friday Night Lights, which is done all on location.) But they are more important on multi-camera sitcoms than any other kind of show. With a one-camera show, the director can shoot around the sets; part of a one-camera TV director’s job is to make cheap sets look bigger than they are. And if a set is hard to maneuver around, a one-camera show can disguise that too; I’m sorry to bring up Buffy again, but the library set on that show was famously difficult to place the actors in. With careful camera placement, that problem could be solved.

But a multi-camera show is basically a filmed stage play, and the sets of a multi-camera show are like stage sets: they have to be set up in such a way that if you’re looking at the scene from only one direction (and on a multi-camera show, while there may be different angles, we’re looking at everything from one side, like a theatre audience looking at a stage), all the actors can “read” properly. And because the multi-camera sitcom is broader than a single-camera show, the set has to make its points very simply and clearly, so that the studio audience can understand what the house/kitchen/office is about. Many of the great sitcom sets have one or two pieces of furniture that define the whole set, and say something about the lead character.

And a good sitcom set needs to make it possible for people to come into and out of the scene with a minimum of delay, to keep the pace fast and to allow for jokes (you can’t have a character enter immediately after a set-up line unless the door is in just the right place, and unless they enter immediately, there’s no punchline). This is why on almost every multi-camera sitcom set, the front door leads right into the living room. A sensibly-designed house puts a little space between the entrance and the living room, but if Ray and Debra Barone lived in a sensibly-designed house, their neighbours/relatives couldn’t barge in and immediately confront them while they’re sitting on the couch.

An ideal sitcom set is something like the All in the Family set. You’ve got Archie’s famous chair, the most famous piece of set decoration in television history, as the centre of attention in the room, the inspiration for countless jokes about who sits in the chair, who isn’t allowed to sit in the chair, Meathead being told to get out of the chair, etc. You’ve got Edith’s chair next to Archie’s, and you’ve got the couch at the right for Meathead and Gloria to sit on (sometimes to with Archie, sometimes to make out). At the left, you have the dining table, and the door to the kitchen; at the back, you’ve got the stairs, allowing people to run upstairs or downstairs very fast. Everything is visible to the audience, everything reads perfectly, and everything is set up so the set can be used to tell the story in the most efficient way 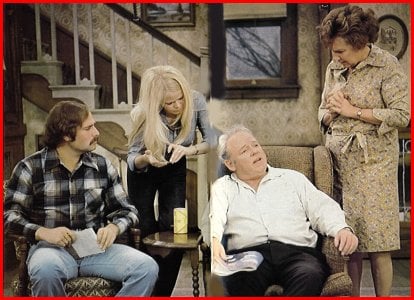 But how many multi-camera sitcom sets have that kind of instant readability, not only these days, but in, say, the last ten years? Even a successful show like Will and Grace always struck me as having a lot to be desired in terms of set design; Will’s apartment was okay, there was room for the actors to move around, but it didn’t say much about the people who lived there, it didn’t provide much opportunity for good jokes, and the layout of the place was sometimes a bit awkward for the actors. And one of the biggest problems Back to You had was that the sets were really not well thought-out at all; the office sets had no sense of geography — you couldn’t always tell exacty where the actors were — and no real sense of character. They were just big cluttered rooms. (Compare that to a really good newsroom/office set like the NewsRadio set. That’s a big set, yet you always know where everyone is. It achieves its effects by completely ignoring the physical reality of what such an office would look like; no radio station has the booth at the back in a gigantic glass cage suspended above the bullpen. But sitcom design isn’t about authenticity, it’s about what works, and that worked.)

One reason Two and a Half Men is the most popular sitcom on TV may be that it has a set that really works. It tells you something about Charlie and his lifestyle, it has some sections that are good conduits for gags, like the glass doors at the back and the staircase, and it allows actors to read clearly even when they’re in multiple parts of the set. (Since we rarely see an entire sitcom set at once, it’s all the more important that we should be able to know exactly where everyone is, even if we only see them in medium shot or close-up.)

But what are some other multi-camera sets that have that kind of effectiveness these days? Or is that just a lost art now that the good work is going into the (important, but very different) work of designing for one-camera?

To give some perspective on the importance of a good set to storytelling on the multi-camera sitcom, here’s an excerpt from an interview I once conducted with Asaad Kelada, the veteran sitcom director, on the WKRP in Cincinnati episode where he introduced a new set (the “bullpen” where most of the employees worked) and Les Nessman’s imaginary “walls.” (This interview was conducted last year before he, I or other fans of that show knew how bad the season 1 DVD set would turn out.) That show introduced a new set midway through the first season precisely because none of the early sets had enough room for many characters at once, and to shift the show more toward an ensemble comedy, they needed a set that would show off the ensemble nature of the show, and by hitting on a gag that used the set, they made the whole set work and gave everybody in the room something to play off of.

I remember that episode and that development very clearly, because it was one of those wonderfully stimulating creative moments for everybody. There was a lot of discussion that the series needed a “bullpen” where everybody would be joined together in one space, instead of just in the studio and office and so forth. And so that set was created with offices in between, and then the question was, how do we separate them and create character in-between, especially the character of Les Nessman? We decided that he was so territorial, and so quirky in his behaviour, that the idea came in rehearsal that he would put tape around the desk, so that he would be able to hold his ground, and dominate the room if he chose to. And then, also in rehearsal, the idea developed that he would not let people in unless they knocked. That developed with myself and the actors in rehearsal, and then Hugh [Wilson] and the writers came down and they were delighted [and wrote it in].

When that bullpen was created, there was some question of whether it was going to work and how we were going to use it, but it ended up being a central set for the series and played a vital part. But that particular gag with Les did end up becoming a crucial character trait, because he could choose not to let people in, or he wouldn’t answer, and it was funny because everybody had to play along with it. That becomes [part of] the format.

(And yeah, I’m a WKRP fan, but the idea here applies to every good multi-camera sitcom; the directors and writers and actors need to find things on the set that the characters can play off of, just as on Taxi everybody played off Louie’s cage, or on Frasier everybody had different reactions to the all-important sight of Martin’s chair in the middle of Frasier’s snazzy apartment.)