The trouble with 'Saturday Night Live' 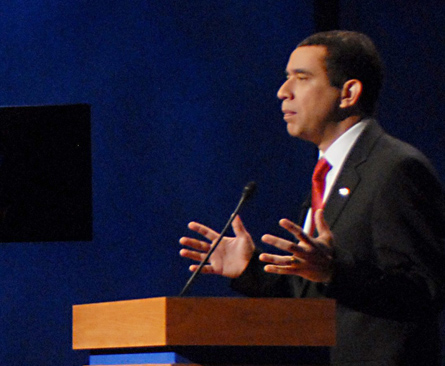 The great thing about SNL’s “The Rock Obama” sketch a few weeks back was that it helped clarify why Fred Armisen’s Obama impression isn’t very good. The Rock, who is not a professional comedian (well, wrestler is arguably the same thing) managed to get Obama’s voice and inflections in such a way that when he spoke, you could really connect it in your mind with the way the real Obama talks. Armisen doesn’t; he just plays Obama as generically serious and earnest, but he hasn’t come up with any memorable vocal mannerisms. Since they can’t get The Rock back to be Obama every week, they’d better get Armisen some kind of tic that can define his version of the character. They don’t even have to be accurate tics, as long as they are loosely connected to something real. Dana Carvey’s George Bush wasn’t really anything like the real Bush, but it did start with something we all recognized about his voice, that slightly nasal twang. Armisen’s got nothing so far.

Last night’s opening sketch, a lame opening to a mostly lame show with the exception of the Angelina Jolie vs. Madonna bit (I still don’t get how they could miss with something as sure-fire as having everybody dress up as comic-strip characters; but except for the return of Andy Samberg’s Cathy, nobody had a funny take on those characters), was also yet another example of how bad SNL is at one-joke sketches. There’s nothing wrong with a one-joke sketch, but when SNL does them, as I’ve remarked before, it tends to be literally one joke repeated over and over in exactly the same form. So the joke is that Obama will go down a list of businesses and say which ones will be allowed to survive and which ones won’t, and then he… does just that. With almost no variation. That’s not really a sketch; it doesn’t go anywhere, and it could stop at any point withoutthe sketch being any different. A good one-joke sketch has variations on the theme, and even a structure of some kind. The classic example is “Who’s On First?” Not only are there variations on the basic joke, even if they keep coming back to the “Who’s on first” joke, but the sketch actually builds to somewhere, because Costello is getting increasingly angry at Abbott and keeps trying different tactics to get a straight answer out of him. Or a great semi-recent one-joke sketch, the lie detector sketch from Mr. Show.

I’ve said before that SNL’s weakest point is the type of sketch that’s built around one repeated joke, but I’m not sure why. I just know their writing is stronger when their sketches are actually telling a complete story with a beginning, middle and end, like the “Greg is not an alien” sketch or the Sarah Palin sketches last year. When they get to a Who’s-on-First type sketch, they seem to forget that those sketches actually need to have a beginning, middle and end too. Or maybe I’m just thinking too much about why lame sketches are lame. They just are, I guess.