Spain honours a Canadian who joined its fight against fascism 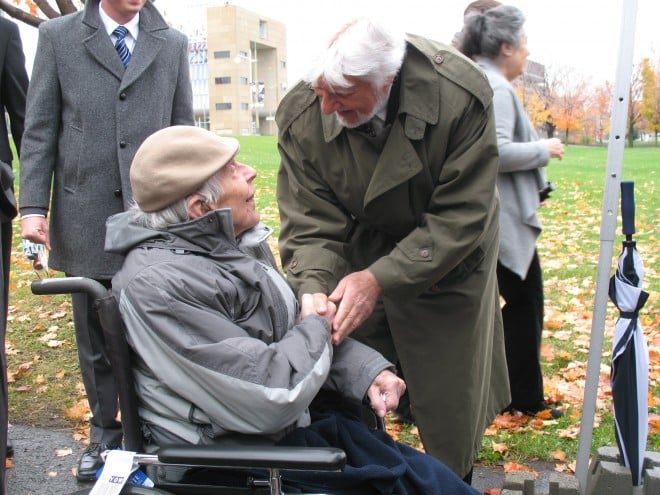 Yesterday, under grey skies by the banks of the Ottawa River, Spain fulfilled an old promise to a 94-year-old Canadian.

In 1938, Spain’s republican government was fighting a doomed war against a fascist insurgency led by the Spanish general Francisco Franco and backed with troops and hardware by Hitler and Mussolini. In a futile effort to force Franco to send his Italian and German allies home, Spain announced it would do the same to the thousands of volunteers who had come from around the world to share its struggle.

“Comrades of the International Brigades: Political reasons, reasons of state, the welfare of that very cause for which you offered your blood with boundless generosity, are sending you back, some to your own countries and others to forced exile. You can go proudly. You are history. You are legend. You are the heroic example of democracy’s solidarity and universality in the face of the vile and accommodating spirit of those who interpret democratic principles with their eyes on hoards of wealth or corporate shares which they want to safeguard from all risk.

We shall not forget you; and, when the olive tree of peace is in flower, entwined with the victory laurels of the Republic of Spain, come back. Come back to our side for here you will find a homeland…”

Jules Paivio, a young Sudbury man, was not in Barcelona to hear that speech. He had been captured by Franco’s Italian allies in the Catalan hills earlier that year, stood before a firing squad, was spared, and thrown in a fascist prison camp. And it would be another four decades before Franco died, Spain’s olive tree of peace bloomed again, and democracy returned to the country.

Many veterans of the International Brigades visited Spain after that. Jules has been back several times and was there only five years ago, when he surprised his son, Martin, by delivering a lengthy speech in Spanish. And for many veterans, at least in spirit, Spain has always been their home. “It’s probably one of the only decent things I’ve ever done as an adult,” Canadian veteran Victor Himmelfarb once said of his time there in the war.

Yesterday Spanish Ambassador Eudaldo Mirapeix began a process to make Spain Jules Paivio’s official homeland by awarding him Spanish citizenship. A previous Spanish government passed legislation allowing veterans to receive Spanish citizenship in 1996, but then they would have had to relinquish their previous citizenship. This requirement has now been waived. Despite cracking his ribs two days ago, Jules came to Ottawa to receive the honour in person.

He signed the papers at the Spanish Embassy, following a ceremony at a monument to the Canadian volunteers in Rideau Falls Park. The monument was first unveiled ten years ago, by Governor General Adrienne Clarkson. Mirapeix wanted to mark this anniversary, and also announce plans to add a Spanish contribution to the monument to show his country’s gratitude.

“It is difficult to thank them with the intensity they deserve,” he said, then turned to Jules and added: “Through him we honour them all.”

MORE THAN 1,600 Canadians fought in Spain. They were, for the most part, immigrants or the children of them. They were poor and politically radicalized by the Great Depression. More than half were Communists, but this shorthand description is misleading. Most were motivated by injustice and loyalty to their comrades in relief camps and skid rows, not Stalin.

In Spain, party bosses complained about the Canadians’ irreverence and lack of political commitment. When the Second World War began with Stalin and Hitler as allies, some American veterans of Spain dutifully followed Moscow’s lead and marched against U.S. participation in the war. Scores of Canadian veterans of Spain — including Jules — enlisted to resume their fight against Hitler and fascism.

Edward Cecil-Smith, commander of the Canadian Mackenzie-Papineau Battalion in Spain, pledged to lead it back into battle against Germany. He joined the Canadian army and was praised by his commanding officer. But army brass saw his service in Spain as a stain and discharged him — setting the tone for how Canadian Spanish Civil War veterans would be treated for decades.  The RCPM spied on them until at least 1984.

Mirapeix is right. It is difficult to thank them with the intensity they deserve now, in part because they were so rarely thanked when they were alive.

The English poet Herbert Read once wrote about anticipating the sadness of living without the men he fought with during the First World War:

But, God! I know that I’ll stand

Someday in the loneliest wilderness,

Someday my heart will cry

For the soul that has been, but that now

Is scatter’d with the winds,

I know that I’ll wander with a cry:

O whither are you gone, my company?’

Today Jules is the last surviving Canadian veteran of the International Brigades. About a decade ago, in the course of researching a book about Canadians in the Spanish Civil War, I drove from Ottawa to Sudbury to interview Jules. He invited me to stay over. Late that night he remembered his friends.

“There are people right through your life who you feel close to and you want to know better, but perhaps you hadn’t the opportunity,” he said.

“The thing is this. You look back through life — and I think you’ll find this too — it is the comrades and the people you are impressed by. You almost fall in love with them.”