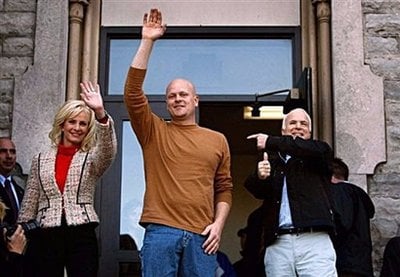 For me, Fridays during American football season are typically spent over at the Couch Boys blog, quite possibly the only NFL picks on the Internet to include references to Matthew McConaughey, Tony Randall, Dom DeLuise’s nudity, John Mayer’s crotch and Scott Reid’s incompetence.

But this photograph cannot go uncaptioned upon. Submit your entries below in the comments section. Winner gets something nice – promise. (And while we’re at it, let’s give some credit to John McCain: they say he’s old but the man is still able to simultaneously execute two different hand gestures: the “thumbs-up” and the “hey, look at him.” Your move, Obama).

FILED UNDER: i - fonzie - am with stupid