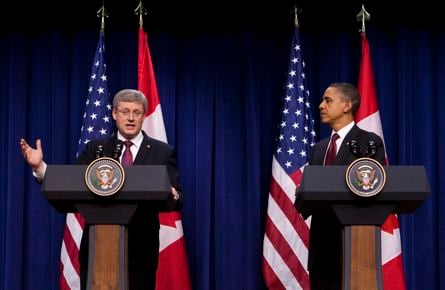 When Stephen Harper stood alongside Barack Obama on Friday for a rare joint press conference on Friday, he made a few pleasantries in English – then immediately launched into a long monologue in French.

In Canada, bilingual government announcements are routine. But the consequences of starting off in a language his hosts could not understand was dramatic: American news networks immediately hit mute, cutting to random talking heads back in their studios discussing Egypt in English as Harper silently pontificated — relegated to a half-size image in split screen.

The networks didn’t switch back to live audio – not even after Harper eventually got around to repeating himself in English – until Obama started talking again.

So, given this very rare and valuable opportunity to be carried live on U.S. television networks, this is basically Americans what heard from Canada’s PM: “Well, first of all, thank you, Barack.  Both — thank you for your friendship both personal and national.  And thank you for all the work you’ve done and all of your people have done to bring us to our announcement today.”

That’s it. Thanks for your input, Canada.

It’s hard to get Americans’ attention on Canadian issues. It’s especially hard to get decision-makers in Washington to listen to the Canadian message on the border, and even harder to do it on a day when they are completely engrossed in the situation in Egypt. But the very prospect of hearing what Obama was going to say about Egypt meant there was greater interest than there otherwise would have been in that press conference.

So Harper’s visit on Friday was the one chance for a long time to come to reset the discussion on the border — and to change the American conversation from a new U.S. government report that is creating a misleading meme that only 32 miles of the border are secure and that the United States’ northern boundary is a bigger threat to its security than its southern one. That notion threatens to become the next “Millennium Bomber” – shorthand for why the border should be thickened, no matter its impact on Canadians and our shared economy.

The feeling in the room, too, was one of awkwardness as the assembled U.S. media sat and waited for something to write about. Obama tried twice to make light of it. “Now, I love French, but I’m just not very capable of speaking it,” he said at one point. And later after Harper spoke, he said to laughter, “And I thought — I agree even more with his answer in French.”

Perhaps Harper was trying to appeal to any francophone voters back in Canada who were also tuned in. But if the national interest of a bilateral visit was to get Americans to pay attention to border issues important to Canada, Harper’s decision to speak first in French, instead of beginning in English and switching to French after his points were communicated, resulted in reinforcing for American voters the message that Canadian concerns simply don’t matter.