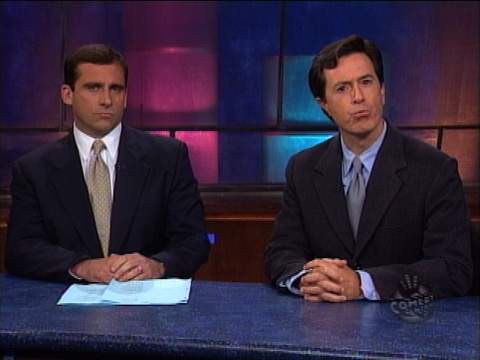 So, it turns out that when Steve Carell said he was thinking of leaving The Office after the upcoming season, he wasn’t just playing hardball for more money: he really wants to leave when his contract is up, and the writers will presumably have a year to figure out how to write him off and lay the groundwork for a Michael Scott-less season. Even if they don’t ultimately decide to move Jim into the permanent boss role, all the “Jim is the new Michael” storylines they’ve done are certainly going to come in handy in a spot like this.

The show will likely go on if Carell leaves (even Carell has been trying to emphasize this in its interviews). For one thing NBC doesn’t have another comedy that’s even remotely successful. Even if, as is likely, the ratings go down without Carell, what else does the network have? Outsourced? NBC has a long tradition of putting itself in this position, where they don’t have any popular new comedies and have to hang on to their old hits as long as they can; The Office is no Friends in terms of success, but the network will still want to keep it around until it comes up with some new mainstream hits… which should happen around 2015 at this rate.

(I’ll add that this news further calls into question NBC’s decision to schedule Community at 8 o’clock. That show isn’t yet popular enough to lead off a night, but it does have more growth potential than 30 Rock or even Parks and Recreation, and by placing it in the most vulnerable time slot — leading off Thursdays and smack up against Big Bang Theory — NBC is pretty much dooming it. It would make more sense to put it after The Office and see if it can get strong enough to hold up its own end in 2011-2.)

And for another thing, this coming season will only be the sixth full season, plus the first mini-season; I doubt the writers, actors or network are ready to move on to projects that probably won’t be as good.

So it’ll go on, but it’s not as common as I might have thought for ensemble shows to go on without the lead. I would have thought, offhand, that an ensemble show — particularly one about a workplace, where people come and go — can survive the loss of almost anybody. (Whereas if Roseanne were to leave Roseanne, that would pretty much be it.) But in practice there’s usually one essential star that the show cannot survive without. M*A*S*H had to have Alan Alda; Cheers had to have Ted Danson. When those guys didn’t want to do it any more, the shows couldn’t go on. The difference is that they left after 10 years, so the show could reasonably be retired with them; Carell is planning to leave at a point where the show can’t afford to end just because he’s going away.

Happy Days, the show that somehow managed to incorporate every single “Trope” (sorry, I know some commenters hate that word, and I even understand why), actually managed to improve its ratings after Ron Howard left, but that was because Howard was essentially the second lead in all but billing, and had been for years. I don’t think The Office has a character who can be The Star the way Carell is. However, Happy Days also filled the Howard gap by playing up the romance of Joanie and Chachi, so prepare for lots more Jim and Pam action — maybe a separation followed by multiple reunions, something like that.

And then there’s Spin City, where Michael J. Fox had to leave due to his illness, and was replaced by Charlie Sheen. Fortunately that’s not an option for The Office.