A temple of modern art as seen through the eyes of a yokel. 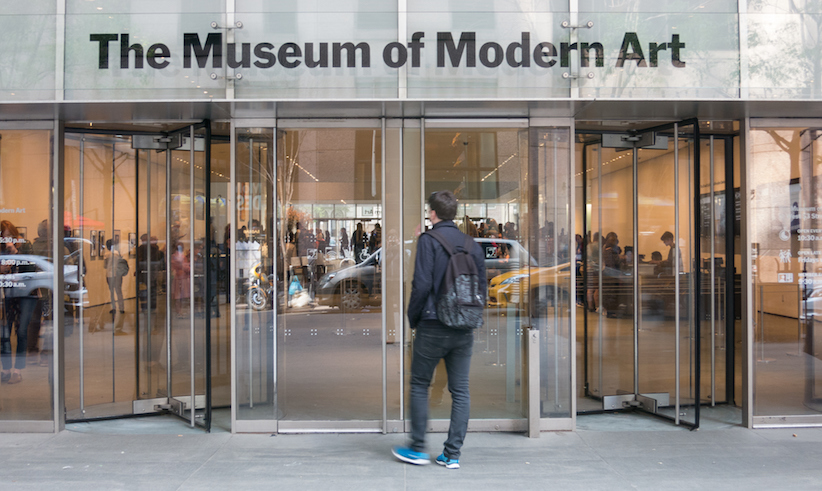 STEPPING OFF the escalator on the second floor of the Museum of Modern Art, I feel an all-too-familiar sensation: I am coming up against the limits of my intelligence. For a decade now, I have been engaged in a tentative dance with contemporary arttempted by the urge to ridicule its meat-dress provocations and polar-bear-in-the-snow abstractions, yet fearful that by doing so, I would expose myself as being to ignorance what Gary Busey is to teeth.

Enough. Here in the MoMA, which less than a year ago moved into its massive new home in midtown Manhattan, I will end this infernal internal debate. And if I can do it without knocking over the nude mannequin guy with the big hairy genitals, as I almost did just now, then so much the better.

We begin in front of the plasma screen that presents Sam Taylor-Wood’s David, described as “an intimate portrait of English soccer icon David Beckham, shot in a single 66-minute take while he was sleeping.” Around us, a dozen people regard the image in silence, watching as Beckham sleeps, flinches, sleeps, scratches, but mostly sleeps. Whoa, he just rubbed his nose! I hear a squeal. I’m afraid to stare, but I’m pretty sure the young woman behind me just had an orgasm.

David fidgets. People begin to drift away. In London, some declared David a miraculous achievement in beauty—on par with anything created by Michelangelo (yes, that Michelangelo). Whereas I stared at it for about 10 minutes and found it to reside in roughly the same vicinity of artistic merit as Letterman’s revolutionary monkey cam.

We move on. Elsewhere, a long piece of wood leans against a wall. There’s a rubber mat on the floor. A pile of lightbulbs, too. I walk with the bouncy, carefree step of a man who has discovered that, with the right marketing, his garage can cease being a “disorganized pigsty” and instead be heralded as “modern art.”

We approach One byjackson Pollock. The authors of the museum guidebook describe the painting as “a masterpiece of the drip, or pouring, technique… the image as a whole is dense and lush—yet its details have a lacelike filigree, a delicacy, a lyricism.” (The florid writing style of the art world has always been eerily reminiscent of that of a high school student who has neglected to read the novel for which he’s presenting a book report.) The guidebook continues: “Some see in paintings like One the nervous intensity of the city, others the primal rhythm of nature.” And still others see a College Pro painter’s drop cloth after a hard summer’s work.

Rothkos and Newmans await. For years now, one of the most reliable laughs in Ottawa has been to wander into the National Gallery and spend a half-hour standing in the vicinity of Voice of Fire, the striped abstract painting by Barnett Newman, which visitors still seek out to impugn, unfailingly with gusto, often with profanity. An enterprising modern artist, if willing to take time away from preparing his latest exhibition of nose-pickings, could fashion a killer work from an audio recording of this commentary.

Confronted at the MoMA by Newman’s massive Vir Heroicus Sublimis (which was presumably created after the artist awoke and declared, “I think I’ll paint a red one with five stripes today!”), the debate comes into focus: on one hand, I feel like a yokel laughing off these works, because many smart people see brilliance in them. But honestly: flinging some enamel at an unprimed canvas or slapping a piece of crudely painted masking tape down on some monochrome maroon and declaring, hey, looky here, this paintin’ is chock full o’ spiritual meaning and symbolic content!—it all seems about as valid as me lowering my backside onto this keyboard and calling the ensuing eruption ofvowels and consonants (bujvyyyy v bv mn) a piercing commentary on man’s inhumanity to man. (Which by the way it is, if anyone from the MoMa should happen to ask.)

The visit is over, and so too the debate: I don’t know much about art, but now I know what I like making fun of.