The Crown jewels: best bling in the world

The Crown jewels get new digs in the Tower of London

Given the imminent Diamond Jubilee celebration, it seems only fair that the most dazzling treasures of the Crown are getting some new digs. The Tower of London just unveiled new displays for the Crown jewels, all the better to show off their sensational bling.

Though tourists invade the historic fortress daily, it’s still one of the safest places in Britain, protected by active duty soldiers. Good thing, given the amazing regalia inside, including a spectacular array of crowns, sceptres, rings, swords and armills. There are earrings from Queen Elizabeth (the original Virgin Queen), an 18-inch-high silver gilt “Exeter Salt,” circa 1630, used to hold that once-precious mineral and even a 39-inch-wide punch bowl and ladle (also, naturally, in silver gilt). Chief among the precious items are the Cullinan diamonds, made when the mammoth stone from South Africa was broken into nine separate stones.  The largest weigh 530 and 317 carats each and are part of the sceptre and imperial state crown, respectively. The rest belong to the Queen. Yes, personally. (A history can be found at the website of De Beers, which sponsored the renovation.) 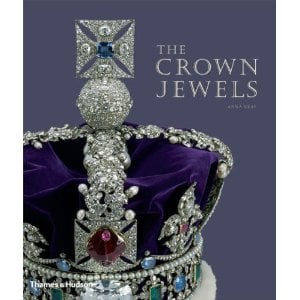 And they aren’t just gathering dust while tourists troop by. In a new fascinating exploration of the Crown Jewels, author Anna Keay reveals that the sovereign regularly requests items from the tower. For example, in 2008, five of the altar plates (17th century silver gilt) were taken to Northern Ireland to carry Maundy Thursday purses for the Queen to distribute; the lily font and christening ewer were used at Windsor Castle for the baptism of the Queen’s eighth grandchild in April; in July the impressive Charles II dishes were on display for Lady Rose Windsor’s wedding at St. James’s Palace; and then, of course, there was the annual state opening of Parliament, which necessitated using the state diadem (on the way to Parliament), imperial state crown (during the ceremony) and the sword of state. Apparently the crown is so heavy that the Queen wears it around Buckingham Palace for a few days before the state opening, just to get accustomed to its heft.

There’s so much to-ing and fro-ing that Keay reveals that the tower had a half dozen labels made for the public displays. They read simply, “In use.”