The Commons: A return to the natural order of things

The Liberals figure out why they're called the opposition 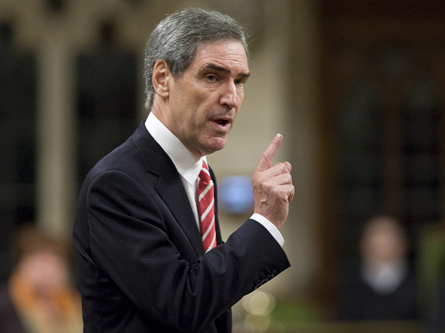 The Scene. “Our responsibility is to provide an opposition and an alternative government for Parliament and for Canadians,” a wise leader of Her Majesty’s official opposition said some years ago. “What the government has to do, if it wants to govern for any length of time, is it must appeal primarily to the third parties in the House of Commons to get them to support it.”

And so it was that today, in its own particular and perhaps peculiar way, Parliament returned to its natural state.

“Mr. Speaker,” said Michael Ignatieff at the outset of Question Period, “in Canada we have a government that does not believe in government.”

So it was, of course, that the Liberal leader had, hours earlier, filed official notice of the official opposition’s lack of belief in the party that presently forms government. He did in nine words—”That this House has lost confidence in the government”—what no Liberal leader in more than two decades has dared do.

The Prime Minister stood then and reached for reasonableness.

“Mr. Speaker,” he said, proceeding with his usual routine of shrugs and pleading gestures, “the leader of the opposition is looking for a reason to call an election that nobody wants. It is clear that when one speaks, for example, about the unemployed of this country, the government acts. We know Bill C-50 is very important for the unemployed of this country. I encourage the leader of the opposition and his party to support this bill that provides significant benefits and increased benefits for the unemployed instead of voting for a costly and unnecessary election.”

Even here there was something approaching normalcy. The Prime Minister requesting permission to govern. Where a year ago it was the Prime Minister’s solemn duty to force the terrible burden of democracy upon the masses, now the onus lies apparently with Mr. Ignatieff. Where once Mr. Harper was compelled to mock the other side for supporting his agenda, now he can rightfully denounce them for opposing it.

“Mr. Speaker,” Mr. Ignatieff came back, “Canadians want a government that will focus on their needs, give them hope and help them build for the future and yet we have a government—”

“Mr. Speaker,” he continued, “I am glad that side of the House is convinced of the proposition. We certainly are not.”

The Liberals stood to applaud this rhetorical effort.

“Mr. Speaker, again the leader of the opposition is flailing around trying to justify an election that nobody wants for a reason nobody understands on a policy that nobody has heard of,” the Prime Minister quipped in response, raising the ghost of last year’s Liberal leader.

“This government has important measures before the House, tax measures to help the Canadian economy, to help homeowners and the population,” Mr. Harper continued. “It has important measures before the House to help the unemployed and help workers in this country. I would encourage the leader of the opposition and his party, rather than trying to create a needless and unnecessary election, to work with us on these policies or at least suggest some alternatives we can debate.”

The government deemed this worthy of a standing ovation.

The Liberals chose then to employ Ken Dryden, their great moralizer, a man capable of making even the shortest declarations seem epic. The Conservatives groaned loudly.

“Mr. Speaker, it is the worst recession in more than 70 years,” he reported. “At times like this, it does not matter where people live, what party represents them. They are Canadians, they need help, so government money goes where the need is greatest, except it has not. It has gone far more to Conservative ridings, far more.”

“Does a person, a Canadian living in a Liberal, Bloc or NDP riding suffer less by losing their jobs?” Mr. Dryden wondered. “Confidence? No. At a time like this, how could they?”

For this, the Conservatives turned to John Baird, their great satirist, a man capable of turning anything into something of credit to this government. On this occasion he was well-prepared, announcing his side’s intent to spend millions for the benefit of those in Mr. Dryden’s riding.

“Mr. Speaker,” Mr. Dryden shot back, “that is not the point.” And though it wasn’t, the Conservatives laughed and mocked.

There was some toing and froing then over various issues before the day reached its climax with the second query of Liberal Hedy Fry.

“Mr. Speaker, here is another embarrassing example of crass politics. The logo on the 2010 Canadian Olympic retail apparel was released today, and it bears a striking resemblance to the logo of a certain political party,” she began, coyly.

“Canada’s Olympic Games belong to all Canadians. While it is clear that the Conservative government’s multi-million dollar infrastructure campaign is crassly partisan, can the Prime Minister at least stop trying to politicize the Canadian Winter Olympics?”

Gary Lunn, the minister of state for sport, would have none of this. He had, he said, absolutely nothing to do with whatever Ms. Fry was talking about. And what, he wondered, did the Liberals have against the noble institutions—Tim Hortons, the Bay, those Olympic athletes we cheer and lament for a couple weeks every two years—of this proud country?

Perhaps they could not have predicted the specifics. But here, surely, is precisely what the founding fathers of our nation had in mind when they bestowed this House upon us.