The Commons: And that's when the nuns started yelling

All eyes were on Jack Layton, after those unruly "sisters" were escorted outside 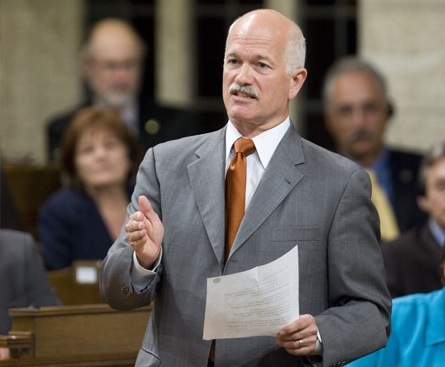 The Scene. Dominic LeBlanc was speaking in his grand stage voice, the sound of his second question filling the chamber, when the shouting started.

In the first row of the north visitors’ gallery, three nuns, or at least three women clad in the outfits of nuns, were chanting something unsavoury about the seal hunt, each holding a banner that read “The Seal Slaughter is a Bad Habit.” Get it?

The Speaker called for a pause in proceedings and all turned to gape at the spectacle. While security officers struggled to contain the invaders, Conservative Steve Blaney stood and held aloft a binder, apparently wrapped in seal skin. MPs stood to applaud their colleague’s brave choice of office supplies. Liberal Gerry Byrne crossed the floor to happily shake Blaney’s hand.

Security eventually gained control of the situation—the nuns handcuffed and carried away, each still yelping their protests as they were shown the door—and the Speaker called on LeBlanc to continue his casting of aspersions on government efforts to ease trade between Canada and the United States.

It has only been three days and already it has been a fine first week back for our 40th Parliament.

Business resumed Monday with the primary subject of discussion being precisely when that business would end. Though rarely is anyone ever eager to see an election, everyone is ceaselessly fascinated with guessing when that election might come. Perhaps there is some sort of prize for picking the correct date. Or maybe there is some sort of pool we haven’t been made aware of. (In which case, I’d like to put $5 on June 8, 2010.)

Much of the preceding summer had been spent pining for someone, most particularly Michael Ignatieff, to say something, anything, of substance—to suggest an idea or two so that we might return to the glorious days of yore when we were a people obsessed with public policy and spent nearly as much time debating it as we did breathing. Shortly after noon on Monday, Mr. Ignatieff briefly laid out his vision for Canadian foreign policy in a speech delivered precisely one city block to the east of Parliament Hill. Few seemed to notice.

Nonetheless, the NDP had decided by this afternoon to support the government’s immediate agenda—a tax break for those of us who’ve recently renovated our kitchens, and some fiddling about with the employment insurance system. Never mind months of gleeful NDP scorn for both the government and the Liberal opposition who were reluctant to topple it.

Before Question Period today, NDP MP John Rafferty rose with his impression of a government backbencher.

“Mr. Speaker, I join my colleagues back in this place after a long summer of catching up with constituents in my riding of Thunder Bay-Rainy River, and I am certain they heard the same message from their constituents that I heard from mine,” he said. “The message is: Go back to Ottawa, help fix the economy and make Parliament work.”

Conservative MPs clapped and thumped their desks with approval.

Strange then that Mr. Layton was treated so poorly when, awhile later, he rose to question the government side.

“Mr. Speaker, despite what the Prime Minister used to say about taxes, he has a finance minister who confirmed last week that he is proposing a $19 billion payroll tax increase on workers and businesses,” the NDP leader reported. “The Canadian Federation of Independent Business has come out strongly against this job-killing initiative. Let me ask the finance minister, why would he want to bring forward a huge tax increase on the backs of Canadian families and Canadian businesses at this time, or any time for that matter?”

Out in the foyer, the NDP leader was being pestered to explain himself, the press gallery apparently struggling to grasp this new normal. Of course, Mr. Layton’s new position is only irrational if you consider his previous position to have been rational. As it probably wasn’t, his position now likely makes perfect sense.

No matter though, news was breaking and opposition MPs were arriving at the microphones to express their shock and outrage. Seems that government aid packages sent to remote native communities in Manitoba to help those communities prepare for any H1N1 flu outbreaks included body bags. Seems some found that a tad offensive.

The good news: the business of Parliament seems sure to go on for some time yet. The bad news: well, see the good news.