The Commons: Gerard Kennedy has some questions

Given his new penchant for holding the government to account, Kennedy could almost be mistaken for a member of the NDP 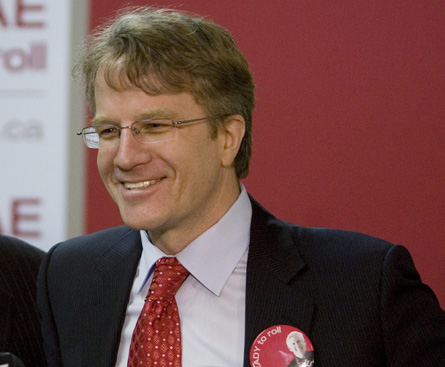 The Scene. The Prime Minister was pleading humble competence, all shrugs and up-turned palms. But then Michael Ignatieff, having tried his first two questions in French, had to go and repeat his accusations in English.

“Mr. Speaker, Canadians should be able to count on their government to help them find jobs no matter how they vote and no matter where they live, but instead we have a government that is using infrastructure money like a rewards program,” the Liberal leader alleged.

Mr. Ignatieff leaned forward and put his fingers together. The Conservatives groaned.

“Quebec’s unemployment rate is higher than the national average, yet Quebeckers are receiving the lowest per capita infrastructure funding in all of Canada,” he continued. “How does the Prime Minister explain this? How does he explain his own numbers?”

Turns out he explains it quite simply.

“Your numbers!” a Liberal cried in confusion.

And soon enough, Mr. Harper’s pointy finger was back out, poking a hole in the air before him.

“We are working with provincial and territorial governments across the country and of course there will be a more or less rough per capita distribution on all of these programs,” he ventured. “The fact of the matter is 7,500 projects have been identified, 4,000 that are under way. Rather than flailing around trying to come up with excuses for an unnecessary and wasteful election the leader of the opposition and his party should be supporting the economic action plan, should be supporting these projects in Quebec and all across this country.”

Perhaps he should. But then he already did. And now it’s Jack Layton’s turn to carry that load.

Next it was Marlene Jennings’ turn, the Liberal rising to show-off a jacket that featured no less than four zippers. So far as she could tell, the government was steadfastly avoiding full disclosure of its ways and means. John Baird rose to dismiss this concern. Ms. Jennings rose to suggest he was not answering her question.

Mr. Baird stood and begged for sanity. “Mr. Speaker,” the Transport Minister declared, “we have put aside partisan politics and are working very well with every provincial government.”

The Liberals found this particularly hilarious.

All was mere preamble though to another airing of Gerard Kennedy’s grievances.

Previous to perhaps two weeks ago, Mr. Kennedy was most famous for having shifted the balance of power to Stéphane Dion at the surreal Liberal leadership convention of 2006. As you might’ve noticed, this did not work out particularly well for anyone, save perhaps Stephen Harper.

But here is Mr. Kennedy now, looking into things, doing research, adding and subtracting large numbers, carrying the one and generally making it his job to hold the government to account on a daily basis. And such is the current state of things that such stuff has seemed no less than revolutionary. Indeed, if you weren’t paying sufficient attention, you might assume Mr. Kennedy was a member of the NDP caucus.

“Mr. Speaker, yesterday the Prime Minister forgot a few things when he was bragging in New Brunswick about how he was looking after the economy,” Kennedy offered today with his first effort. “He forgot to tell Canadians that he was really just looking after himself, how he gave his own MPs in New Brunswick an average of 44% more in grants than opposition ridings in the province. Would the Prime Minister care to confirm to Canadians today what Mr. Landon, now a former candidate in Markham, has already made public—that Conservative ridings get more than other ridings and that the only jobs the government is interested in are jobs for themselves?”

The Prime Minister would not. In his place, Mr. Baird boasted of the government’s fine work in Mr. Landon’s former riding.

Mr. Kennedy was unimpressed with this response, and with volume and force befitting his surname, he stepped up his prosecution.

“Mr. Speaker, if that minister had the courage to actually put the numbers out, we could tell how he is letting down Canadians right across the country. If the Prime Minister was not so nailed to his chair, he would stand up and say how it is fair that some Canadians are punished for not voting for him,” he yelled, not bothering to intake air between words.

“The Prime Minister gave his six MPs in New Brunswick $18.5 million more on average than the other ridings in the province at the expense of the families that are unemployed in the province of New Brunswick,” he continued, his face turning an impressive shade of maroon. “He made sure his people were four out of the top five. Why should Canadians anywhere in Canada trust him to look after their interests?”

His Liberal mates stood to applaud his performance.

Coming from the Transport Minister, there is perhaps no higher compliment.