The party of infinite mercy, shows none to Diane Finley 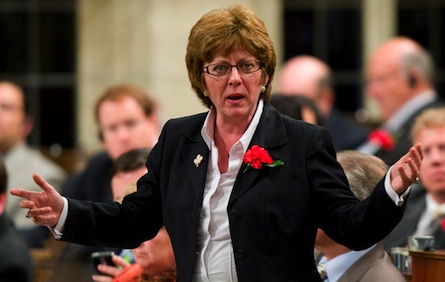 The Scene. It was Marlene Jennings’ turn to ask why. Or, more specifically, it was her turn to ask when. As in: “When is the government going to establish a national standard of eligibility that is fair to everyone?”

The subject this day was employment insurance. It has been the same subject for some time now. For weeks, it seems, the Liberals have been asking the government to amend the system through which benefits are doled out to the those Canadians who’ve most recently been unceremoniously separated from their jobs. And for months, it seems, the government has been arguing that changes have already been made, what problems still exist are the responsibility of previous Liberal governments and, anyway, any future Liberal government will just raise punitive and punishing taxes on the poor and jobless.

No doubt the unemployed have watched enraptured each afternoon by the nuanced exchange of ideas, proposals and slander.

In response to Ms. Jennings this day, the minister responsible, Diane Finley, reviewed the charges noted above and proceeded to her standard finish.

“They want to increase taxes and rhetoric,” she said of the Liberals, “we are increasing profits.”

The Liberals claim on this to be the party of infinite mercy, but here they show none. Indeed, despite the minister’s having long since run out of anything to say, they continue to insist on asking her questions.

Jennings proceeded to suggest the government was generally incapable of doing what it vows to do. “Last fall, the Conservatives promised to make unemployment insurance available to Canadians who are self-employed or independent workers. They did not,” she reported. “Since the government seems to rely on Canadians to create their own jobs, when will he keep his promise and give them the right to employment insurance?”

Back came Finley, this time with a virtuoso ode to the Greek god of the hypothetical. “Mr. Speaker, we are looking at alternatives,” she said. “Of course we are. One of the things we committed to Canadians that we would evaluate are what options exist for people claiming maternity benefits or parental benefits when they are self-employed. We committed to establishing an expert panel to study that and we look forward to doing that.”

It was at this point, after some colourful imagery, that Jennings got round to asking why.

“Mr. Speaker, if excuses were gold, the Conservative government could pay off its humongous deficit in a matter of a couple of weeks,” she said. “Unfortunately, excuses do not count for much when the power is shut off at home because one’s EI cheque has not been delivered. Excuses do not put food on the table and they do not pay for children’s clothes. Why has the government sat on its hands while hundreds of thousands of Canadians face financial ruin? Why?”

Ms. Finley did not have much to say to this, except to assure Canadians that her department was hiring—more people apparently needed to process the paperwork generated by all those without employment.

After several rounds on other matters, the Liberals resumed this line of questioning again, sending up Hedy Fry to wax ominous. “Mr. Speaker, the Minister of Human Resources and Skills Development must be lost somewhere in the twilight zone,” she observed. “When asked to improve access to EI benefits in regions like B.C., where access requirements are among the toughest, she continues to mislead by referring to the added five weeks of benefits, which might as well be 500 to those who cannot get access. Does the minister not understand that in a recession her rigid qualification rules just do not work?”

Finley responded in maths. “Wherever people are in B.C., it is easier to access EI and they can get it for a longer period. Yes, we added five weeks of additional regular benefits because that is what Canadians asked for. The increase in benefits in some places is as much as 11 weeks, and 11 minus 5 is 6. That is still an increase apart from the extra five weeks we brought in,” she correctly observed. “We are delivering for those who need our help.”

Now Keith Martin was up, frantic and frustrated, speaking in desperate, exasperated tones. “Mr. Speaker, that is just not acceptable,” he snapped. “My province is hemorrhaging jobs, 25,000 in the forestry sector alone. In my province, a gentleman from Campbell River lost his job. He lost his job two weeks before the new standards came in. He cannot get EI.”

The Liberal pleaded for sanity, or at least his version of such. “Would the minister finally do the right thing and enact the single standard we are asking for, a 360-hour EI eligibility?” he begged. “Will she do the right thing and do this for our workers who have lost their jobs in B.C. and across Canada?”

Finley, ever undeterred, finished with a flourish, a seamless series of platitude and cliché. “Mr. Speaker, we are making every effort to help those who have been unfortunate enough to lose their jobs. That is why in Vancouver they can get seven weeks of benefits more than they could a year ago. They can get those weeks easier as well,” she said.

“We are also going beyond that. We are expanding training opportunities for all who are unfortunate enough to lose their jobs, not just those who are on EI but those who have been out of the workplace for a long time. We want to help them get the skills they need for the jobs of the future so that they can continue to look after their families over the long term.”

Answers to matters of when and why will apparently have to wait for tomorrow.