The Commons: 'It depends'

For the Tories, it's all in how you measure things 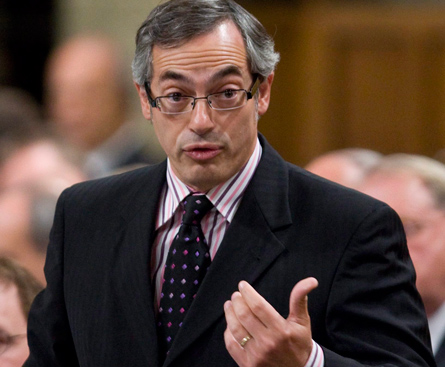 The Prime Minister, he reported en français, had admitted it was wrong for the government to put Conservative party logos on giant novelty cheques announcing the arrival of taxpayer dollars. But what of the public funding itself? What, for instance, of the fact that 75% of a fund for unemployed youth had been allocated in Conservative ridings?

On the government side, there was much yapping and whining.

“Having admitted it was wrong to put logos on cheques,” the Liberal leader wondered aloud, “will the Prime Minister admit now that partisanship in spending must stop immediately?”

The Prime Minister would not, if only because he was elsewhere. Absent too was John Baird, the government’s usual choice to enunciate a response on this file. So here, instead, came Industry Minister Tony Clement, waving his arms and pleading for your respect.

“We are on the side of Canadians,” he declared. “We are producing these projects because they mean jobs and opportunity. They mean getting behind and beyond the recession to a better and more prosperous economy through economic recovery. That is our message to Canadians and that is what Canadians want of us.”

Oddly enough, Mr. Ignatieff did not find satisfaction in this explanation.

“Mr. Speaker, yesterday the Prime Minister admitted that it was not correct to put those logos on top of government cheques,” he repeated, this time in English. “However, that is not the only thing that was not correct. There is overwhelming evidence of Conservative partisanship in this spending. Here is one particularly shocking example. Over 90% of an accessibility fund destined for disabled Canadians goes to Conservative ridings. Is it not time that the Prime Minister admits that is not correct either? When will he put a stop to it?”

Back came Mr. Clement. “Mr. Speaker,” he said, “the evidence is clear and incontrovertible.”

“That’s right!” yelped a Liberal across the way. The official opposition happily applauded the Minister’s declaration, forcing the Speaker to intervene.

“Mr. Speaker, we are engaged in helping this economy. We are focused seriously on the issues that Canadians care about: jobs, helping those who need help through our EI reform, making sure that infrastructure is there now and for the future,” Mr. Clement repeated when allowed to continue, listing various notions on his fingers. “The honourable member fails to mention all of the money that went to his own city for the Spadina subway line, the Sheppard subway line, Union Station and the northwest transmission line. We can go on and on, but the point of the matter is that every part of this country must be part of the solution and that is exactly what we are doing.”

“Mr. Speaker, for once I agree with the minister. The figures are incontrovertible,” Michael Ignatieff conceded. “Here is another one: 66% of recreational infrastructure projects in this country have been allocated to Conservative ridings. The minister in charge directly opposite gets the lion’s share of the projects. If one votes Conservative, they get the rink. A lot of Canadians think that is wrong. When will the Prime Minister begin to understand that it is wrong? Will he put a stop to it?”

Back to Clement, now waving his notes in the air. “Mr. Speaker, for the Leader of the Opposition, who aspires to be prime minister one day, to get his facts so wrong is quite frankly shocking,” he said, proceeding to not in any way refute the figures just cited. “In Ontario, 29 out of the 57 $1 million maximum allocation projects went to opposition ridings, while 28 went to government-held ridings.”

So there. Nearly 51% percent of million-dollar projects in Ontario—a province where opposition MPs represent 52% of the ridings—were allocated to ridings occupied by opposition MPs. Now, mind you, by one count, 62% of recreational projects in Ontario went to Conservative ridings. And a related analysis of million-dollar projects nationwide showed that 57% were allocated to ridings with Conservative MPs, despite Conservatives currently representing 46% of ridings. But surely we can all agree that, of all those figures, Mr. Clement’s numbers seem fairest.

Back and forth we went on a day of bitterness and statistics.

Out in the foyer, Tony Clement emerged to take questions from reporters. One came forward with new numbers—that Conservative ridings in Ontario had, on average, received more money than opposition ridings for the purposes of building hockey rinks, swing sets and soccer fields.

“Well,” said the Industry Minister, “I think it depends on how you measure things obviously.”

On this, if nothing else, there can be little debate.