The Commons: 'Merry Christmas, everybody' 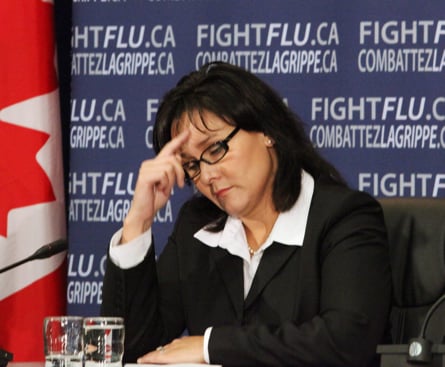 “Mr. Speaker, it is clear that the federal government has two clear responsibilities,” the Liberal offered after the Speaker called for oral questions. “The first is to ensure a steady and reliable supply of vaccines for H1N1. The second is to provide leadership and information on a coherent pandemic response.”

So far, so good. The House did not rise up unanimously to second Mr. Rae’s assessment, but no one stood to shout him down either.

Then, though, the question. “I would like to ask the government a very simple question,” Mr. Rae finished. “How could it have failed so miserably to execute these two critical responsibilities?”

The Health Minister was preoccupied with her Blackberry. In her place stood John Baird, officially the Minister of Transport, but on this day the de facto Minister of Pandemic Influenza, Economic Stimulus, Ethics in Governance and, in the case of some controversy concerning public funds directed to the riding of Tony Clement, Small Town Sidewalks.

“Mr. Speaker, our two primary concerns have been to ensure that we had a safe vaccine and that we have an effective vaccine,” Mr. Baird more or less concurred. “We are pleased to say that six million doses of H1N1 vaccine have been delivered to our partners in the provinces and territories. We will see even more delivered this week. The vaccine is being distributed as quickly as possible and I am very pleased to report that on a per capita basis Canada has more H1N1 vaccine than any country in the world and we will continue to work with our partners.”

The Liberals were not much impressed by this, jeering the Minister’s per capita qualification.

“Mr. Speaker, we have seen significant leadership demonstrated by the Minister of Health,” Mr. Baird assured.

“Let her answer!” loudly insisted a voice from the Liberal side.

Mr. Rae had one last go of it. “Mr. Speaker, the minister had an opportunity to tell the House on Friday because he must have been aware that there were significant reduction in supplies to the provinces. He chose not to share that information with the House of Commons on Friday when he was fully aware of it. Those are the facts,” he said. “On the weekend, the Minister of Health was blaming the provinces, she was blaming the drug company. She was taking no responsibility herself for what took place. Why will the government not take responsibility for the files and the issues that are clearly right in front of it? Why will it not take that responsibility?”

Mr. Baird was unmoved. “Mr. Speaker,” he said, “let me indicate to the member opposite that I do not accept the premise of his question.”

Over then to Carolyn Bennett, source and subject of so much consternation this past week.

“Mr. Speaker, weeks ago when I spoke with public health officials across the country they said they needed clear information on when the vaccine was coming and how much would come each week,” she said. “They never received that information they needed to plan. Now we have huge lineups at vaccination clinics, clinics short of vaccine, people being turned away, clinics cancelled. Private for-profit clinics are getting the vaccine. Thousands of needy Canadians are not. When is the minister going to take some responsibility for these failures?”

For the most part, Ms. Bennett managed not to fume too obviously and, across the way, the Conservatives generally kept quiet. And here, having finished with whatever was on her Blackberry, the actual Health Minister Leona Aglukkaq stood to speak.

Ms. Aglukkaq had obviously done well to memorize her points of emphasis for the day and she would need them. Indeed, after John Baird had finished with his cameo, the Health Minister was made to take the 11 flu-related questions that followed from all sides, including an impressive hectoring from Judy Wasylycia-Leis, the NDP critic who failed to breath between words and subsequently turned quite red. Amid impatient heckles across the aisle, each opposition MP was suitably dispatched with impressive-sounding numbers and reassurances.

“Thousands will be distributed this week. Millions more will be produced next week,” Ms. Aglukkaq assured at one point. “By Christmas every single Canadian will be able to receive the vaccine.”

“Merry Christmas, everybody!” chirped David McGuinty across the way.