The Commons: Unsophisticated debate will not be tolerated in this place - Macleans.ca 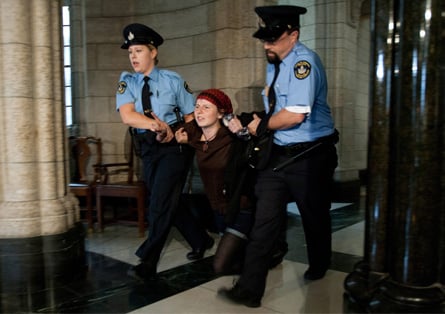 The Scene. Ralph Goodale stood and the Conservatives, obviously quite eager to hear and consider his particular concern this day, were yapping and squawking before he’d so much as spoken a clause.

“Mr. Speaker, survey after survey about the H1N1 vaccine show a dangerous trend. Only half of Canadians are planning to get vaccinated. That is down from two-thirds in July. Too many people do not think it is safe, do not think it is necessary. That is a communications failure that could put lives at risk,” Mr. Goodale posited. “How does the Prime Minister justify an advertising tsunami of $100 million for partisan Conservative propaganda, but only a pittance for crucial information about vaccinations?”

The Prime Minister, alas, was not present. In his place, Tony Clement took a turn.

“Mr. Speaker,” he said, “the honourable Minister of Health is doing an excellent job in communicating to Canadians about the H1N1 flu situation.

“She has said that the vaccine would be available to every Canadian who needs and wants one,” Mr. Clement reported on behalf of Leona Aglukkaq, seated perhaps 20 feet to his right. “Not only is the Minister of Health urging Canadians to get the vaccine but the Chief Public Health Officer is doing so as well. This is the best way to protect our health and the health of our loved ones. Despite the fearmongering on the other side, we are focused on protecting the health and safety of every Canadian.”

To better convey this fearmongering, the Industry Minister wiggled his fingers in the general direction of the opposition side.

The two men repeated their general points en français and then Mr. Goodale endeavoured to deal more precisely with the issue. “Mr. Speaker, probably the greatest confusion affects pregnant women,” he suggested. “They are told the unadjuvanted form of the vaccine is best but if that form is unavailable, if the infection rate is rising in their community, and if the pregnancy is over 20 weeks then they are told the adjuvanted form will be okay. It is no wonder they are worried. When are women going to get sufficient reassurance? Why is there not enough of the right vaccine for all pregnant women in Canada right now, not next week, not next month, but right now?”

Mr. Goodale jabbed the air and shouted these last two words, lest there be any confusion over the immediacy implied therein.

Mr. Clement stood and twice more accused the Liberals of undue “fearmongering,” lest there be any confusion about the government’s word of the day.

Up next was David McGuinty, another of the official opposition’s designated shouters. Why, he wondered, had the government spent $100-million advertising its own efforts? With that money, he suggested, you could buy 50 MRI machines, 34,000 hip replacements, 200 insulin pumps. With wait times still so long, why, he begged, put money into television commercials?

“Mr. Speaker, we have shown responsibility as mandated by the House to report back to Canadians on our economic action plan, and we are doing just that,” assured John Baird, another of the government’s designated responders. “When it came to health care we had a choice. We could have followed the example of the previous Liberal government and cut health care by $25 billion, which led to hospital closures and substantial reductions in services, or we could take a different path, the path that the Prime Minister has taken, showing an unprecedented commitment to public health care, something that was absent in the previous Liberal government.”

Mr. McGuinty was quite ready for this. “Says the minister, Mr. Speaker, who fired 8,500 nurses in Ontario,” he said, in reference apparently to Mr. Baird’s time in the Ontario government. “That is a bit rich.”

Once more he listed all of the things—affordable housing units, nurses, chemotherapy drugs—that one might purchase with $100-million. “In the face of so many needs, why does the Prime Minister insist with his obsession for self-promotion?” he pleaded. “Why greed before need and politics before people?”

“Mr. Speaker,” moaned Mr. Baird, solemn face and serious, “I regret the tone of the member opposite.”

The session moved on, first to the Bloc Québécois, who were quite eager to question the Conservatives about the ethical underpinnings of a recent government contract, then to the NDP.

Jack Layton was just beginning to ask the government side about the plight of pensioners when up in the visitor’s gallery there arose quite a clatter. One young person stood and shouted. Police began to remove him from the premises, but then another started yelling. Indeed, each time police moved on one, another started up.

Soon enough nearly everyone in the north gallery was chanting call-and-response complaints about climate change and the government’s refusal to sign a UN declaration on the human rights of indigenous people. As the Speaker paused the proceedings below, and MPs gawked upward, a dozen officers cleared the entire gallery of all spectators. There are reports now of perhaps 200 protesters, arrests and even blood. One network’s footage shows a young woman being dragged through the halls of Parliament, an officer on each arm.

After a few minutes interruption, the Speaker called the proceedings to order and Mr. Layton was asked to go on with his three questions. The trading of accusations began anew. Martha Hall Findlay stood to question the government about some impropriety or another, John Baird stood and responded with an insinuation of his own. The yapping and snapping continued, heckles shouted and hackles raised later when Hall Findlay rose on a point of order to answer Mr. Baird’s charges.

Not a single constable reappeared to drag away any of the more vociferous participants who are duly elected to be here.