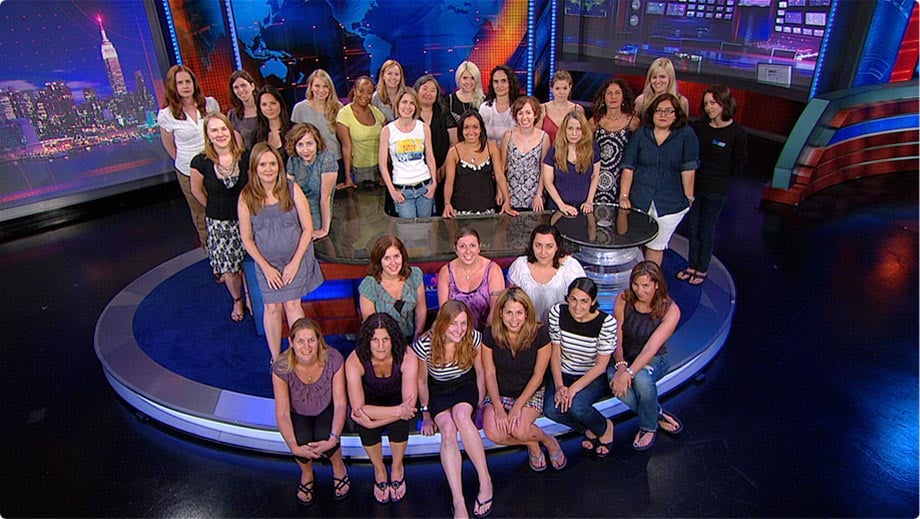 The women who work on The Daily Show (writers, correspondents, non-writing producers, assistants, and so on) have written an open letter in response to this much-discussed post at the blog jezebel.com, where the writer, Irin Carmon, talked to past female employees about the “boys’ club” atmosphere of the show.

Both the original post and the response are sort of hit pieces in their own different ways. Carmon’s piece seemed to imply that there was some unusual level of sexism at The Daily Show or on the part of Jon Stewart, when the facts really indicated that it’s no worse than most comedy shows, and the problem is systemic. (Comedy in general, and especially late-night comedy, has that boys’ club atmosphere baked in. Combine that with the usual problems facing women in the workplace and it’s going to be pretty bad even on a show that is better-than-average in this respect.) And it uses certain anecdotes to paint Stewart as unusually sexist, when the simpler conclusion from those anecdotes is that he can sometimes be a tough boss.

She also seems unduly obsessed with the idea that because TDS is a liberal darling it should be judged by a higher standard than other comedy shows, which doesn’t even make sense in terms of the stated goal: if the goal is to get more opportunities for women in comedy—a good and important goal—the only way to achieve it is to put pressure on the whole industry, not just on shows that can be designated as “liberal.” It’s almost misleading to argue that the problem is specifically a TDS problem, or a Jon Stewart problem.

The response is kind of a hit piece too, though to a lesser extent. It accuses Carmon (not by name) of “seiz[ing] on the bitter rantings of ex-employees and ignor[ing] what current staff say about working at The Daily Show“—when the current staff was unavailable for comment when she was writing the article. And of course it sidesteps the question of the larger problems that face women in comedy and the shortage of jobs for female comics and writers. But I don’t blame them for that; the point of the letter is to reply to the idea that The Daily Show is a bad environment for women. By a Platonic ideal standard, it probably is, but by the actual standards of television comedy shows, it almost definitely isn’t.