The Double Down: your move, America

COLBY COSH: "You would get the impression that it was lovingly constructed from scorpions and poison" 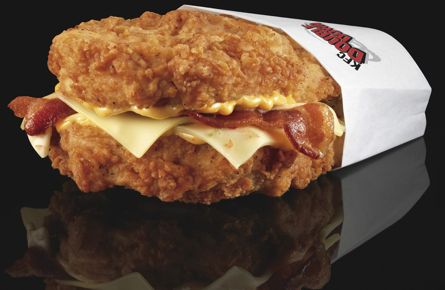 The KFC Double Down makes me despair. Not because of the “sandwich” itself but because of the predictable reaction; in general, if you didn’t know that the thing was made of chicken, bacon, and processed cheese, you would get the impression that it was lovingly constructed from scorpions and poison. KFC is a division of Yum! Brands, Inc., and I’ll call your attention to the fact that even the tormented punctuation of this corporate name sounds as though it was devised by a sketch-comedy writer. Yum Exclamation-Mark Brands Comma Inc. used to be known by the less-friendly, more Vader-esque appellation of Tricon Global Restaurants; I am reasonably sure that this transition must have been scripted by Robert Smigel.

But which side in the war between soulless conglomerates and food puritans has irony on its side? KFC has literally rearranged the same ingredients that go into most every other grab-and-go entrée it serves, and gotten rid of the bread, which, guess what, might not be that good for you anyway. The sinister Elders of Tricon, who were surely lit unflatteringly from above in an austere modernist boardroom when they made the decision to create the Double Down, knew perfectly well that it would create panic and horror for no other reason than its configuration. The Double Down is, explicitly and unapologetically, a piece of food comedy.

And all the horrible people—for it seems virtually impossible to talk about food without being horrible—are reacting exactly as planned. The unapologetically paternalistic healthitarians, the grease-sweating Warcraft-playing fast-food reverse-snobs, the one-idea-in-their-whole-head theorists of food salvation, the paleos and the Pollanites, the narcissistic Nietzscheans who look at cheese as though it was about to go critical any second but will buy whatever’s new on the shelves at the GNC without so much as looking at the label…all the people, in short, who routinely insist on adulterating the pleasure of eating, and that includes, most of all, the types who’ve imbibed too much M.F.K. Fisher and who write pornographically about the “pleasure of eating” as if they were zooming a powerful camera in on an open mouth furiously masticating a mouthful of gnocchi.

The frustrating thing is that this multisided, Darwinian foodkampf is utterly necessary; nobody has the option of resigning his or her commission. We have no choice but to try and figure out how to reckon, as individuals, with the superabundance of nutrition. It is not a coincidence that the Double Down has been given a game-theoretic name. For the executives and accountants at Yum! Brands, Inc. that is probably the most exquisite part of the joke.