The Five Hole: Opposite World Power Rankings for October 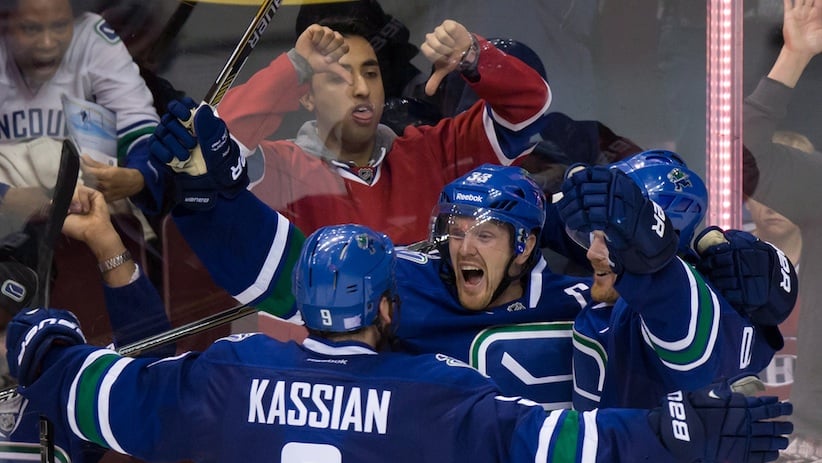 A Montreal Canadiens fan reacts as Vancouver Canucks’ Daniel Sedin, right, celebrates with his twin brother Henrik Sedin, both of Sweden, and Zack Kassian after scoring the winning goal against the Montreal Canadiens during overtime NHL hockey action in Vancouver, B.C., on Thursday. (Darryl Dyck, The Canadian Press)

As the month draws to a close, let’s take a look at the Opposite World NHL Power Rankings – the top five hockey teams in a strange and wondrous land where up is down, bad is good and futility is success.

5. Edmonton Oilers (4-5-1). Yes, they’ve been on a bit of a roll lately, and they’ve been fun to watch – but the Oilers still haven’t won on the road, they’re tied for the league lead in goals allowed and good God it’s Movember which means Jordan Eberle is going to grow that so-called “moustache” again. Chilling.

Plus, let’s face it: the top five of the Opposite World Power Rankings is totally their ’hood. That’s their musty old futon in the corner. Those are their unwashed dishes in the sink. If you want to move out, boys, start by returning your empties and patching over those holes in the wall. Also, beating a team from the west would be nice.

4. Colorado Avalanche (3-4-4). They’ve got just three wins in 11 games, a number of their players are struggling and the coach has produced more line combinations than American TV has produced cop dramas. Pretty sure Nathan MacKinnon has played alongside everyone in Colorado, up to and including Demaryius Thomas.

3. Arizona Coyotes (3-5-1). The Coyotes aren’t good enough to be not bad, and they’re not bad enough to be interesting. They’re the NHL’s Grown Ups 2.

2. Carolina Hurricanes (0-6-2) As the only winless team in the NHL, the Hurricanes lead the league in photos of their defencemen hanging their heads and looking dejected as the other team celebrates a goal.

Curious about Carolina’s futility, I recently devoted a full 43 minutes of my life to watching the Hurricanes play a period of an NHL game. In particular, I paid close attention to the performance of Alexander Semin, the skilled Russian who so far has zero goals and a minus-7 rating. He did not touch the puck. He did not touch another human. One time, I swear he saw a pass coming directly toward him and simply veered off for a line change. He was utterly invisible out there. Or maybe I’m just looking at it wrong and Semin should be praised as an environmental hero for his selfless example of no-impact hockey.

1. Buffalo Sabres (2-8-1). I’m not saying Toronto’s Jonathan Bernier had a relaxing time in net the other night against the Sabres – but he did manage to make all 10 saves without spilling his hot chocolate. Thursday evening, Buffalo went wild and mustered a whopping 13 shots against the Bruins. FEEL THE MOMENTUM. I’m telling you: watching the Sabres play hockey right now is about as exciting as watching paint dry on a neutral zone trap being executed in the middle of Stephen Harper’s hairdo.

Sure, the Hurricanes have a worse record – but Buffalo has the roster, the inexperience and the confused expressions required to be epically, legendarily awful. I’m talking about the kind of terrible that we’ll one day be telling our grandkids about, possibly while feigning a pratfall and making fart noises.

On the plus side, the Sabres are averaging slightly more than one goal a game – so they’ve got that going for them, which is nice.