The sex cult inside a convent: Book review

Through analysis of Inquisition archives, Hubert Wolf reveals a beautiful and charismatic mistress of novices 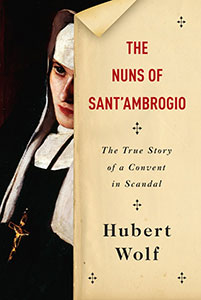 THE NUNS OF SANT’AMBROGIO: THE TRUE STORY OF A CONVENT IN SCANDAL

Perhaps because the author is a sober-minded professor of ecclesiastical history at Germany’s University of Münster, his subtitle is considerably less lurid than it could have been. The scandals at a convent scarcely a kilometre from Pope Pius IX’s palace in Rome included heresy, lashings of sex (gay, straight and all-around religio-erotic kinky), and attempted murder. Small wonder the results of the Inquisition’s 1860 investigation were deep-sixed in its archives. It’s the sort of story Vatican archconservatives feared, rightly, as it turned out, would emerge after Pope John Paul II opened the archives in 1998.

The book turns on the blue-blooded connections of its whistleblower, the 41-year-old wealthy, devout, twice-widowed, passionately romantic (with a capital “R”) Princess Katharina von Hohenzollern-Sigmaringen. She was first cousin both to the Protestant king of Prussia and to Catholic archbishop Gustav Adolf zu Hohenlohe-Schillingsfürst, one of Pius’s closest advisers. Katharina’s money and connections brought her into Sant’Ambrogio and to the near-fatal attention of the convent’s charismatic mistress of novices, Maria Luisa. They also got her out of danger on a day’s notice and, after she decided to make a formal denunciation, gave her direct access to the investigating judge of the Roman Inquisition.

The chief inquisitor was thoroughly alarmed by what he heard. The multiple attempts to poison Katharina after she spoke disparagingly about what she saw as the cult of Maria Luisa were the tip of the iceberg. The beautiful Maria Luisa, 27, who, at 13, had been sexually abused by an abbess, was treated as a living saint endowed with miraculous powers; two of her own novices shared her bed. Meanwhile, the nuns still venerated their founding abbess as a saint, 40 years after she had been imprisoned in another convent for the ecclesiastical crime of  “false sanctity.” For decades, the convent had transmitted authority and spiritual aura via kissing, stroking and more—a decidedly unorthodox laying-on of hands (and tongue). There were affairs with priests, which silenced the male authority figures tasked with keeping a lid on the cauldron of female sexuality the Inquisition suspected lay simmering in every convent.

Yet not all of what went on was cynical or hypocritical: Wolf’s careful analysis of the archives seems to point to an atmosphere of genuine religious fervour in Sant’Ambrogio. In the end, the guilty were punished in the usual fashion: The priests relatively lightly, the nuns more harshly. Maria Luisa, in and out of forced isolation in convents and mental asylums, disappeared from the record in 1872. She had apparently lost her faith.