This Post, Which Is About Spoilers, Ironically Contains Spoilers

The official TV listings for last night’s HIMYM had this description:

After Ted runs into an old flame, he talks to his future kids about how being in the right place at the right time can impact a person’s life.

If you’ve seen the episode, you know what’s wrong with that description. Besides the fact that there are too many episodes focusing on Ted. The whole episode was constructed so we wouldn’t know who it was he ran into until the end of the second act. The cast list for the episode (in the same listing) deliberately didn’t mention the name of the actress playing the part, yet whoever wrote the listing gave the game away and spoiled the ending.

Or they would have spoiled it, except everybody who had watched the show before probably knew he wasn’t going to meet The Mother. Any time they make it look like he’s going to meet the woman of his dreams, we know it won’t happen; that’s been the rule of the show ever since the pilot. The listing more or less gave away who it would be (there are only two “old flames” from the show, and it wasn’t going to be Ashley Williams, though I wouldn’t mind seeing her again), but it didn’t hurt the episode. 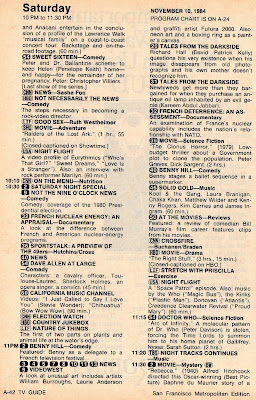 There are a lot of official listings, used as the basis for the descriptions in other listings (digital boxes and elsewhere), that give away too much information. Some of them give away the whole plot up until the ending, particularly when the actual story of the episode doesn’t become apparent until the end. (Sometimes the episode will go to great lengths to hide what it’s really about, but the listing is always trying to describe the episode in the most accurate way possible, so it will just give away what the producers tried to conceal.) And if somebody is supposed to be dead, but is revealed to be alive at the end of the episode, the listing will almost always find some way to give it away, because it won’t say that the character is dead — it’ll say that he or she is “apparently” dead, an instant tip-off that they’re alive.

Then you get listings that are based on earlier versions of an episode, and describe B stories that were cut before airing or even plot points that were re-shot. The Fox animated shows used to have that, because Fox would write up the listings right after the animatic came back, and then not change them when the episodes were rewritten and re-animated. There’s at least one King of the Hill where every official TV listing describes a completely different plot than the one it ended up having.

FILED UNDER: How I Met Your Mother TV Listings