Tiger Woods is coming to help you 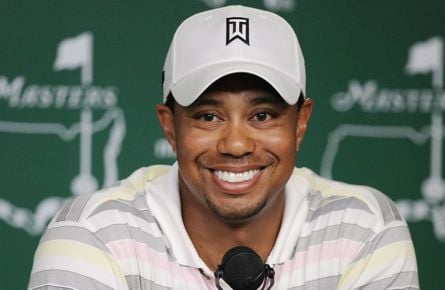 Let us begin with the goatee. It is a curious choice for Tiger Woods. The goatee does not say, “I am keen to begin rebuilding my image as a decent and loyal family man.” The goatee says, “I am the evil twin of the leading character on your soap opera and I am here to ravish the mayor’s virgin daughter.”

Later this week, Tiger Woods will make his return to professional golf, but for now his focus remains on his other full-time job: apologizing. Speaking at a news conference at the Augusta National Golf Club – site of The Masters and, every few months or so, a racial minority – Woods said he was sorry, so very sorry, and a terrible, horrible and very bad man. He also needs to do some work on his swing, thanks for asking.

Rather than pass judgment myself on the quality of the questions posed to Woods, let’s permit his reactions to tell the story. Woods smiled a lot. He referred to the gathered reporters as “my friends” – “You will always be my friends” – and called them by their nicknames. Speaking to one, he uttered the words “my bro.” As he got up to leave, Tiger smiled wide and offered a cheerful, “Thanks guys!” (Also, he actually got a question about his “putting” – and it wasn’t even meant as a euphemism!)

The best part of it all may have been the media’s fascination with how Tiger could possibly have won all those golf tournaments while simultaneously balancing the demands and fetishes of 18 mistresses. They seemed to be looking for tips. Is there an app for that?

CNN touted “Tiger’s Return” with a countdown clock, “live look-ins” at an empty chair at Augusta and even the playing of Survivor’s Eye of the Tiger. If they’d been forced to kill any more time waiting for Woods, the network would have had no choice but to bring in Tony from the Frosted Flakes box to get the perspective of how this seedy tale has affected the seduction efforts of other Tigers.

We did learn a few things during the news conference. It took five stitches to close the gash on Tiger lip – the one caused by the car accident <wink>. Going into rehab made him miss his son’s first birthday and he was vowed to never miss another (his lady friends will just have to wait inside the cake). And Tiger denied that Dr. Anthony Galea supplied him with human growth hormone or performance enhancing drugs – though he didn’t exactly offer a convincing explanation for why he invited Galea, a Canadian, into his home to provide treatment for his damaged knee. (“He’d worked with some other athletes” hardly seems persuasive given the number of American doctors who can make the same claim.)

We also learned that while it’s impossible to discern what Tiger has taken away from rehab, he has definitely cottoned to its usefulness as a dodging tactic.

Reporter: Tiger, how did you fool so many people for so long?

Tiger: [voice softens] You know, Tom, I fooled myself, too.

What does that mean exactly? He was banging all sorts of chicks but he thought he was just making sandwiches? Mustard, lettuce, ham – whoa, who let the naked lady in here?? I HAVE BEEN FOOLED!!! BY ME!!!!!!!!!