From Cannes: Up, Up and Away

Like the house in Disney-Pixar's 'Up,' this festival is held aloft by a colossal suspension of disbelief 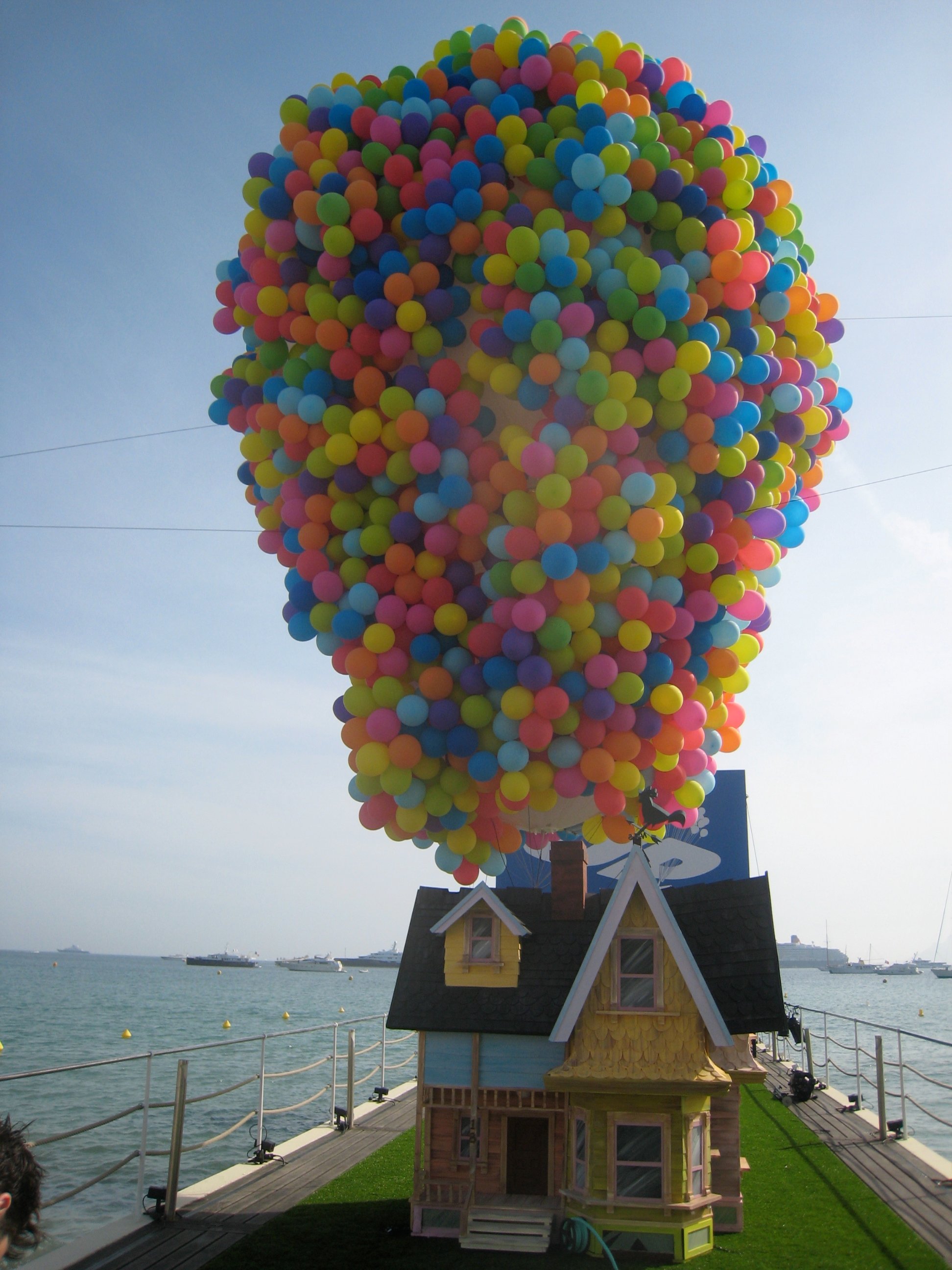 'Up' inflates hype on the Carlton pier; Charles Aznavour voices Ed Asner's role in the French version/ photos by BDJ 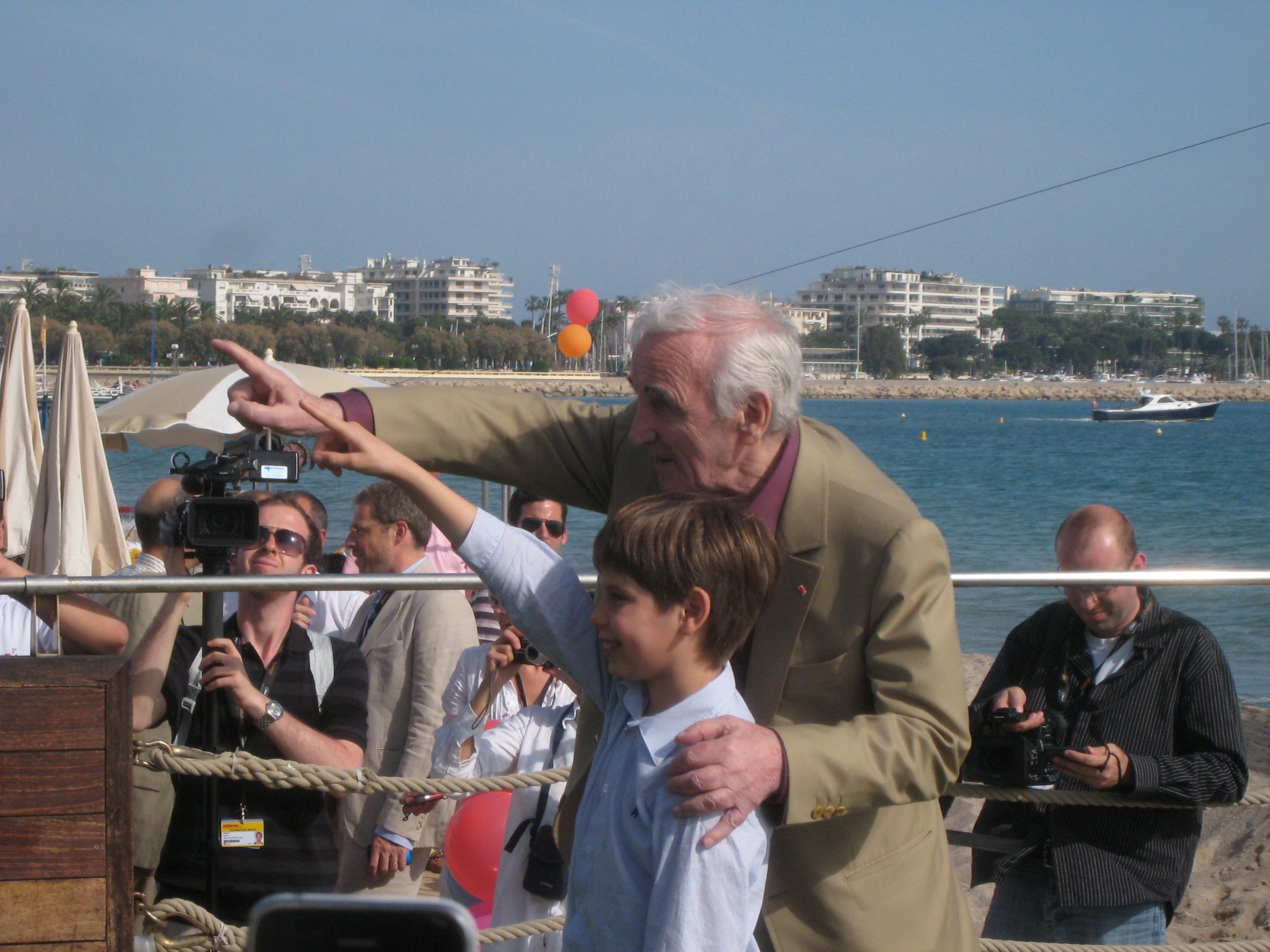 On its opening day, the Cannes Film Festival lived up to its reputation for extremes. Last night the quite delightful Disney-Pixar movie Up became the first animated feature to open the festival in its 62-year history, not to mention the first 3D movie to open Cannes—presenting the bizarre sight of the Lumiere theatre filled with people in tuxedoes and dark glasses. Up is playing out of competition. But the same day, we saw the first competition entry, China’s Spring Fever, which also set a precedent of sorts. A bleak tale of a young man who betrays his wife for a homosexual romance, it has to be the first movie we’ve ever seen from China that’s loaded with explicit gay sex scenes. And this morning, as I sat down to watch Francis Ford Coppola’s Tetro, the opening film of the Directors’ Fortnight sidebar, a fellow critic pointed out that “humping is big” in the Fortnight, especially of the gay variety—notably in I Love You Phillip Morris, starring Jim Carrey and Ewan McGregor, and a perky comedy called Humpday.

This is my 14th year at Cannes. For professional lovers of film, the May pilgrimage to French Riviera is a rite of spring. We come hoping to be surprised, provoked and, if we’re lucky, blown away by a film that shows up out of the blue and takes cinema to the next level. And each year, those of us who take part in this rite wonder if we”ll make it back here for another year. Well, the ranks are thinning. As media companies reel from the recession, film criticism is under assault wherever you look. Some North American newspapers have axed their critics. Others have decided that sending them to Cannes, the world’s cinephile summit, is a luxury they can no longer afford. This year both the Globe and Mail and the National Post have not sent their critics (although The Globe‘s London correspondent, Liz Renzetti, will be on hand for a few days.) This should not go unnoticed. It’s the first time the Globe has not sent its film critic since the 1970s, when the late Jay Scott first began coming here—and helped put Canadian cinema on the map, as Cannes discovered the likes of Denys Arcand, Atom Egoyan, Jean-Claude Lauzon and Patricia Rozema. Meanwhile, the U.S. presence is also severely reduced. Entertainment Weekly‘s presence is cut from three to one writer. People doesn’t have a staffer here. Vanity Fair is not holding its usual bash.

So I feel lucky. It’s s good to be back, even on a recessionary shoestring. The constancy of Cannes is reassuring. This mythic festival, the most opulent in the world, persists like a glorious anachronism. You get that sense that if it continues to thrive, against all logic, so might world cinema. This event is not unlike the house held aloft by a mass of helium balloons in Up: the House of Cannes is a romantic extravagance that floats on a colossal suspension of disbelief. It lives a baroquely constructed bubble; when you’re inside it, the rest of the world ceases to exist. Of course, the mythic stature of Cannes is inflated by its reliable royal visits of Hollywood glamour—this year Brad Pitt will grace the red carpet once again. But in Cannes, Hollywood is not the main event; it’s just a convenient mirage. The festival’s business end is to serve as a trade show and a publicity machine for independent film. And while Hollywood blockbusters appear to be booming, indie cinema is suffering from the credit crunch. There are a glut of small films up for sale here: like real estate, it’s a buyer’s market.

But critics don’t really care about the business end. We come here hunting for the next great masterpiece. And this year there’s a formidable line-up of auteurs presenting new wor—including Ang Lee, Quentin Tarantino, Lars Von Trier, Francis Coppola, Jane Campion, Pedro Almodovar, Ken Loach, and Terry Gilliam. Even if Cannes feels a bit quieter this year, the pedigree of the program is one of the best in years.

The opening night premiere of Up was certainly a more, uh, buoyant affair than last year’s, when the black tie crowd, and many of the critics, grumbled about the Canadian-led co-production, Blindness, being such a downer to kick off the festival. Personally, I didn’t love Up quite as much as Pixar’s previous two movies, Ratatouille and WALL-E. The wit is less astringent, the animation is more cartoon-like. But it should have broader family appeal. And it works beautifully on its own terms, as the bittersweet tale of a grumpy old man (voiced by Ed Asner) who floats his derelict home to the wilds of South America with a mass of party balloons. Along for the ride is an chubby boy scout stowaway. And at the destination of the old man’s dreams, he finds an exotic menagerie of animals, including a goofy pack of talking dogs, and a scary old explorer voiced by Christopher Plummer channeling Errol Flynn via Howard Hughes. Up is a sweet, honestly sentimental story that aims for the heart and scores a bullseye. And with a languid score reminiscent of Around the World in Eighty Days, it’s also a love letter to vintage cinema.

The Hollywood presence in Cannes is not as strong as in previous years, when we’ve seen premieres of the Da Vinci Code, Ocean’s Thirteen and the latest Indiana Jones. You’d expect Angels and Demons or Terminator Salvation to be launched here, but perhaps the studios are tired of seeing their blockbusters savaged by snotty film critics time after time. So this year, Cannes gets to open with a Hollywood movie without Hollywood stars. At least it’s a good one. And the animation team behind it were clearly thrilled to be treated as “real” filmmakers at the grown-ups’ table. Pixar-Disney chief creative officer John Lassiter talked with pride about the four years of meticulous work and dedication that goes into each of his animated features. And he recalled a conversation with Apple honcho Steve Jobs, who told him, “The computers I make at Apple have a lifespan of three to five years. If you do your job right, these films can last forever.”

That reminds me of one of Norman Jewison’s pet phrases: “film is forever.” Most of it, of course, is far from it. But in the next ten days, hopefully we’ll see a picture or two that will still be worth watching 50 years from now.